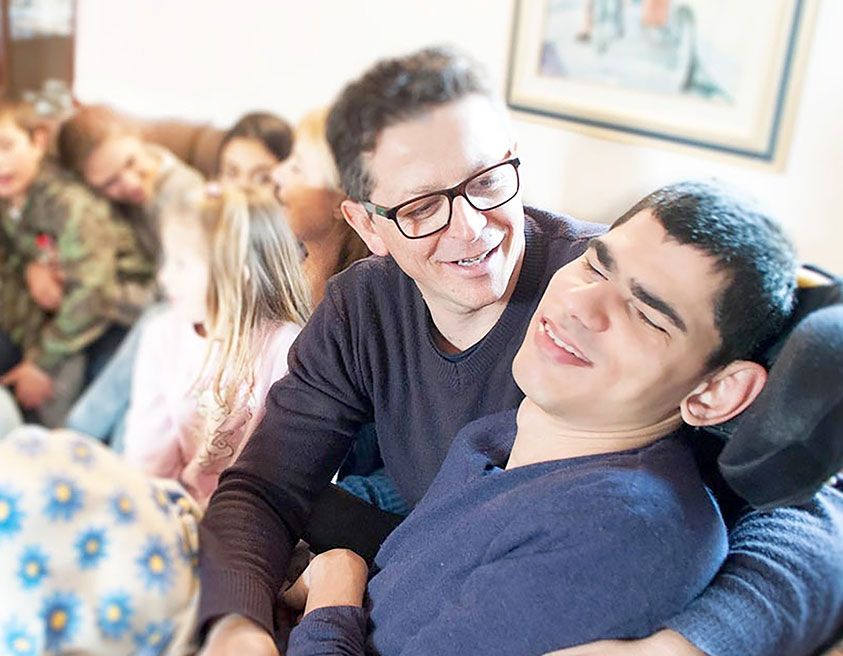 This is the traditional attire Fr. Oreste Benzi, founder of the John XXIII Community, left behind. With it was the most daring commitment to the disenfranchised of society that he has left to his followers all over the world.

A religious sister fighting human trafficking wrote: “I remember Fr. Oreste Benzi’s capacity of approaching each of the prostitutes like a father happy to find the daughter he had not seen for long again. With simplicity, he used to embrace them, bless them, pray with them, give them rosaries…I felt I was in the presence of a simple, good man who makes you feel at ease, who listens to you and is attentive to your needs. Each person was his first preoccupation”.

This is why he was able to attract so many to himself. Persons were his pearls, his jewels. He took care of people who were psychologically weak, carriers of handicap, anybody with any kind of dependence, women treated like slaves and obliged to sell their bodies, and single mothers in difficulty or risking their pregnancy for various reasons.

Fr. Benzi succeeded in putting all those people in his family-hostels and letting them live together as if in a normal family, convinced that it was not necessary to create places “specialized” for each category. The loving atmosphere of the family-hostel should be enough with the medicine of mutual love.

Fr. Benzi’s mission was to make God’s love for suffering humanity known in order to enable them to stand on their feet again and to become more aware of their dignity and role in society. His followers saw him as a man of God, a spiritual father and felt bound to him by great affection, appreciation and a huge gratitude for having accompanied them over the years to become a community.

He was called the “street priest”, “the priest of the prostitutes”, the “worn out cassock priest”, and “the rebel out of love”. With these titles his sudden death in November 2007 at the age of 82 was commented upon, the vacuum left by his departure unbearable in his followers’ heart and in the place that saw his indefatigable commitment, without counting the cost, at the side of the last and the lost.

Whirlwind Of Love
Of humble origin and the seventh of nine children, Oreste Benzi was born in a small village close to Rimini, famous for its beach resorts in Northern Italy, in 1925. He was ordained as a priest in 1949.

At the end of the 1950s, convinced of the importance of being present with the young people to whom he was teaching religion, Fr. Oreste Benzi carried out a number of activities to encourage them to “a friendly meeting with Christ.” In 1968, he created the Pope John XXIII Community Association with a group of youngsters who were prepared to animate the mountain holidays with a few other priests.

The meeting with people who “would never have managed to make it in life on their own” (the disabled, marginalized, excluded, forgotten) and the willingness of a number of youngsters to work with him full time, enabled Fr. Benzi to open the first family-hostel in 1972.

Since then, the Community has undergone a whirlwind type of development: today over 41,000 people all over the world sit at the Community’s table, thanks to over 500 places of sharing provided by family homes, canteens for the poor, reception centers, therapeutic communities, Bethlehem Huts for the homeless, open families and prayer homes. There are 1,287 full members and 215 members testing their vocation in 18 countries in Africa, Asia, Europe and South America.

Incessant Creativity
The Community’s work in the vast world of marginalization has led to the establishment of numerous family-hostels where individuals or married couples act as temporary or permanent fathers, mothers, brothers and sisters of disabled people, children in difficulties, former drug addicts, alcoholics, and mentally disturbed people.

Detoxifying centers for addicts, houses of prayer, facilities for street children, centers for teenagers and young adults, social cooperatives providing educational services and businesses providing work for the disadvantaged, facilities for shared holidays, general reception centers, hostels for girls freed from prostitution, fellowship houses, and SOS Centers are the many initiatives of the Community.

Direct sharing with the marginalized, the despised and the rejected is not a comfortable route to travel. It forbids the members from closing their eyes to injustice. Once embarked on their task however, it is a path that captures and entrances them, leading them to the abandonment of all those false myths of consumerist society that only bring unhappiness.

On 7 October 1998 the Pontifical Council for the Laity issued the decree recognizing the John XXIII Community as an international association of the faithful of Pontifical Right. The John XXIII Community Association has also a seat at the United Nations since 2006, acting as a mouthpiece for the world’s most disadvantaged, where international leaders make decisions about the fate of humanity.

This is the incredible accomplishment of a humble Italian priest, Fr. Louis Giussani. Communion and Liberation embodies his superior intelligence and deep love for the person of Christ encountered in…