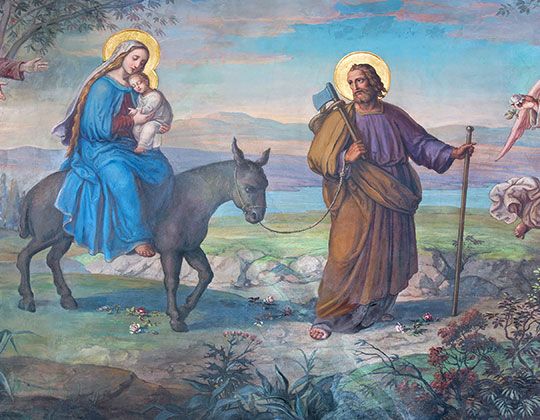 By James Martin | Society of Jesus

In the second chapter of the Gospel of Matthew, we read the story of the “Flight to Egypt” in which, after the birth of Jesus and the visit from the Magi, an “angel of the Lord” comes to Joseph in a dream and warns him to leave Bethlehem for Egypt (Matthew 2:12-15). Why?

Because King Herod was planning to “seek out the child to destroy him.” Mary and Joseph do leave with Jesus, and, according to Matthew, make their way into Egypt. Afterward, King Herod slaughters all the male children in Bethlehem under two years of age. This dramatic episode is part of the Gospel reading for the “Feast of the Holy Innocents,” celebrated on December 28.

So, according to the Gospel of Matthew, what is going on? A family is forced to flee their homeland for fear of persecution. This is the modern-day definition of a refugee. In fact, the United Nations High Commissioner for Refugees defines that group of people as follows:

“A refugee is someone who has been forced to flee his or her country because of persecution, war, or violence. A refugee has a well-founded fear of persecution for reasons of race, religion, nationality, political opinion or membership in a particular social group.”

The Holy Family As Refugees
The Holy Family, as Matthew recounts the story, was fleeing because of a “well-founded fear of persecution” because of their “membership in a particular social group”— in this case people with young children living in Bethlehem. I am not sure how you could get any clearer than that.

Did Joseph and Mary apply for official refugee status? Of course not. Those kinds of regulations were most likely not in effect. There may not have even been any borders at the time. But, as Daniel J. Harrington, S.J., a New Testament scholar, reminds us in his commentary on Matthew in the Sacra Pagina series:

“Egypt, which came under Roman control in 30 B.C., was outside the jurisdiction of Herod. Egypt had been the traditional place of refuge for Jews both in biblical times (see 1 Kings 11:40; Jeremiah 26:21) and in the Maccabean era when the high priest Onias IV fled there [emphasis mine].”

Thus, we see a family fleeing to a foreign country out of fear of persecution. Even the language used in Matthew illuminates their situation.

In the original language in which the Gospels were written, that is Greek, Matthew, writing for a Jewish-Christian audience around AD 85, presents the angel’s command as follows: “Arise, and take the child and his mother, and flee into Egypt....” (Matthew 2:13). Even Matthew’s angel identifies the Holy Family as refugees.

The original Greek word to focus on is pheuge, “flee,” from which derives the word “refugee,” the one who flees. Even Matthew’s angel identifies the Holy Family as refugees.

But, even if the Holy Family does not fit the contemporary definition of refugees (and they do) and even if the Gospel of Matthew did not use the Greek word pheuge (and it does), we should still have compassion and be ready to care for modern-day refugees and migrants.

Welcome The Stranger
Why? Because Jesus asks us to. Later in Matthew’s Gospel, Jesus reminds us that any time we “welcome the stranger” we welcome Jesus himself (Matthew 25). Refugees and migrants are our brothers and sisters desperately in need of our help.

Jesus’ command to care for the stranger is also, for the Christian, a law superseding any laws that would hinder, prevent or outlaw such care and compassion. I am always amazed that some Christians who appeal to higher laws in other life issues set them aside when it comes to refugees and migrants.

From 1992 to 1994, I worked with the Jesuit Refugee Service in Nairobi, Kenya, where I came to know hundreds of refugees who had fled from Sudan, Uganda, Somalia, Ethiopia, Eritrea, Rwanda, Burundi, Côte d’Ivoire and many other countries out of a “well-founded fear of persecution.”

Some, as the Holy Family had feared, had seen their children murdered in front of them. Others had watched as their parents were slaughtered before them. Despite their intense and almost unimaginable suffering, they were among the most faithful people I have ever met—holy families in their own ways. Surely these families deserve our protection as much as the Holy Family did.  Published in America - The Jesuit Review

Jacinta and Francisco, two of the three little shepherds who witnessed the Virgin Mary's apparitions in Fatima in 1917, are the first children non-martyrs to be canonized in the history of the Church.…

A 16-year-old girl in South Sudan recounts how she nearly died during labor because of her young age and physical inability to mother her child. She was forced to marry without her consent after a man…