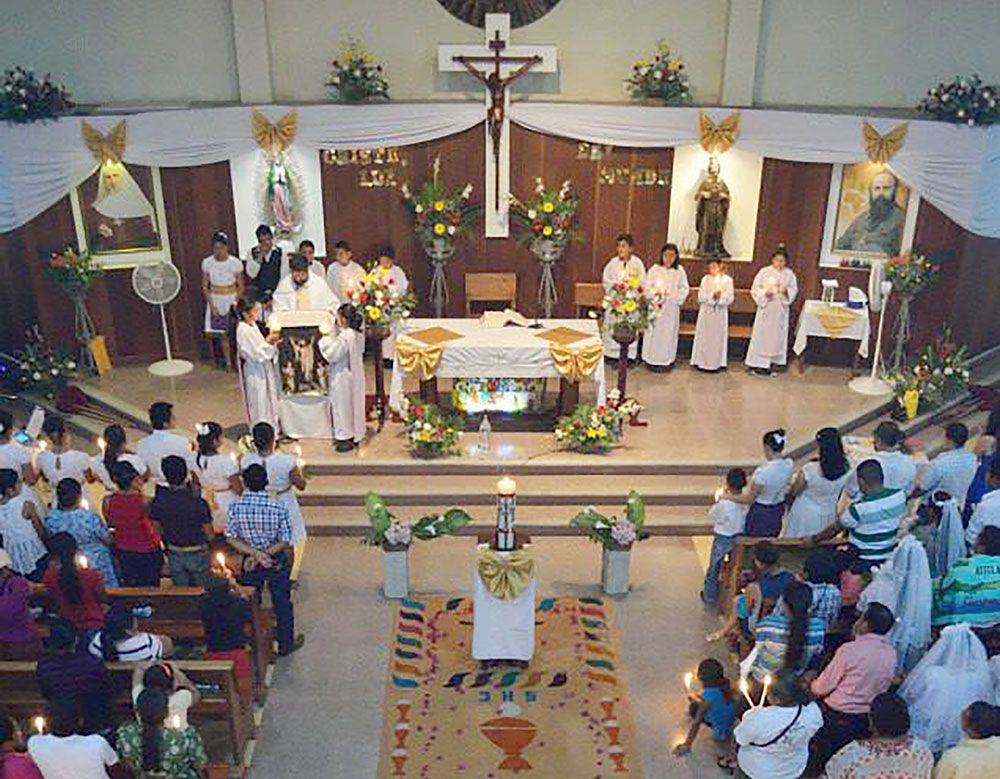 Mission in the Hidden Amazon

A Comboni Missionary living in the US, Father Joseph Bragotti, worked in San Luis Petén mission in Guatemala. He went back for a visit and took a pilgrimage to Tikal, the ruins of an ancient city, in a rainforest in Guatemala.

On Easter Monday 2016, I concluded my visit to my earlier mission post in San Luis Petén, Guatemala, with a “pilgrimage” to Tikal, the ruins of one of the main cities of the ancient Mayan empire.

TIKAL! The Temple of the Jaguar! Not too long before my visit, Morgan Freeman had his picture taken in front of this pyramid while seeking inspiration for his National Geographic series on God. The reason? He was about to debunk a Hollywood theory. According to Hollywood malarkey and the movie “2012,” a Mayan prophecy foretold that the world would end on December 21, 2012. It didn’t and my former parishioners are still laughing about it.

Tikal and Petén are ancient, remote and challenging. In 2005, a season of “Survivor” was filmed in Petén. Two of our young parishioners, who worked with the tourist bureau, were hired by the team. The place was so remote, they told me, that Survivor people “really” got lost, “really” had sun strokes, and “really” faced an unexpected crocodile in the pond.

So, while tourists braved 32-plus degree temperatures to climb two hundred steps of the tallest temple, I sat in the shade of a massive centuries-old ceiba tree. From there, I followed the members of an extended Mayan family as they prayed to God and honored Mother Earth, turning to the four corners of the earth with raised hands and offering a burning sacrifice of corn, cacao, and the like. The scene brought back a flood of feelings about my own interaction with Petén and its people. As a Comboni Missionary, I was privileged to share their life from 2007 to the end of 2010.

Amazon Echo-System
As I look back on my experience in light of the recently completed Synod for the Amazon, I realize that Petén is one of the many unknown, smaller, hidden–yet not less important for this–“Amazons” of the world.

History books and tourist guides seem to ignore what happened in Petén between the Spanish conquest more than five hundred years ago and the 1950s, when settlers from the south started moving in search for a new life and a piece of land. Settlers have learned to live side by side with the indigenous people, who took to the hills and the forest centuries ago, to avoid contact with the Spanish armies. The rocky soil, torrid and humid climate and, above all, impenetrable rain forest helped the Mayan’s quest for isolation and faithfulness to God and tradition.

A Unique Earth Day
Locals still treasure these traits. I had only been in Petén a month in 2007 when I was personally drawn to them. We were going to celebrate Earth Day by having our parish agriculture committee hold a series of demonstrations and lectures, accompanied by prayers. The venue was typically Mayan and not the average parish hall.

The Comboni pastoral team of San Luis, a Mayan holy man, local catechists and about 50 other men, women and children–entire families in fact–met at an outstation in early morning. We took the path behind the two-room school building and plunged into the jungle behind it. We walked for two hours through ever-thickening vegetation and got lost twice. We finally reached a clearing at the foot of a steep incline, where we found a centuries-old well.

Soon the men started cutting openings in vegetation as thick as a wall to allow us to climb the incline. In about a half hour we reached a small flat area, our goal. We were standing atop a pyramid built many centuries ago and totally covered by the thick mantle of the rain forest. That’s where I celebrated Earth Day in 2007.

Common Hopes And Woes
It took the Spanish armies 150 years to conquer Petén. By then, in the mid-1600s, Dominican friars had gained the trust of the Mayas, revealed the Gospel to them and had encouraged the indigenous people to write down, rather than erase, their own mythology, to treasure it and to build on it–the Popol Vuh.

What the Amazon basin people have been facing up to now is exactly what the Mayans of Petén faced then. The Mayans took their new faith in Jesus and their traditions into the rainforests of Petén. Centuries later, their faith and their culture resurfaced in the middle of the twentieth century not only to face new challenges and new dangers but also to offer new ways of keeping both, faith and culture, alive.

How did the Mayas of Petén keep the faith for decades without having a priest among them? Faith in the Gospel of Jesus was embedded in the traditions of the Popol Vuh: a great respect for Mother Earth, for life, for the forest, and for the lives of the ancestors as signs of God’s goodness.

The Synod on the Amazon is proposing a liturgical rite that will be Catholic without necessarily being Roman. Is that something new? Not really. I grew up in a non-Roman rite in Italy and eagerly adapted to Mayan customs at age 70 in Petén. I delighted in sharing the gift of the Eucharist with our Mayan parishioners because, after years of deprivation, they hungered for it and rejoiced in it in their own way: pillars of pom (local incense) rising to the sky, colored candles dotting the floor, a chicken meal brought to the altar at the offertory, a shared cup of chocolate from ground cacao beans before the final blessing on solemn Masses, blessing the grounds where the new church would rise by burying holy gifts, praying to the four corners of the earth, praying in caves such as La Cueva de los Padres to ask God for the gift of abundant water, the sound of the marimba accompanying it all. What if a Mass lasted two hours and a prayer service lasted all night? God was present in a tangible way.

Our communities in the forest begged for the privilege to preserve the Eucharist in their chapels and share the Lord at Sunday prayers. Allowances had to be made. In that torrid and humid climate, oil lamps do better than beeswax. In a “sacred vessel” the hosts would spoil within a week, but colorful plastic containers do the job. What counts in Petén is the hunger for Jesus.

Who kept faith alive when priests were not there? Lay people like the Elder Flavio, whom people called El Pastor and revered as such. Thanks to a far away, wise and pastoral bishop, years ago Flavio was allowed to catechize communities: He baptized their children, solemnized their weddings, and prayed at their passing. When a priest came back in the 1960s, Flavio walked him for months through the hills and the forest until he got to know his flock. This is what Pope Francis wants the Church to be: “A Church going out…,” with people of equal dignity serving in ministries.

The Church, very local and very much part of the culture, is now a reality in Petén. But government corruption, land-grabbing, climate change, human trafficking, gangs, deforestation, the mineral and oil exploitation, and the economic and genocidal situations we helped create in the nineteenth and twentieth centuries are now threatening the very existence of these wonderful survivors.

May the resilience that helped the Mayas of Petén survive the Spanish invasion and the way they chose to cling to the coupling of their culture and their faith keep them alive today.

Feast of St. John the Baptist

Communities throughout the Philippines rejoice on the feast day of St. John the Baptist (June 24) by splashing everybody on the street with buckets of water. Aside from the usual dousing with water,…

The current three-year-old conflict in South Sudan has forced more than 2.3 million people to flee their homes. These war-affected populations also need psycho-social and spiritual help to mitigate…