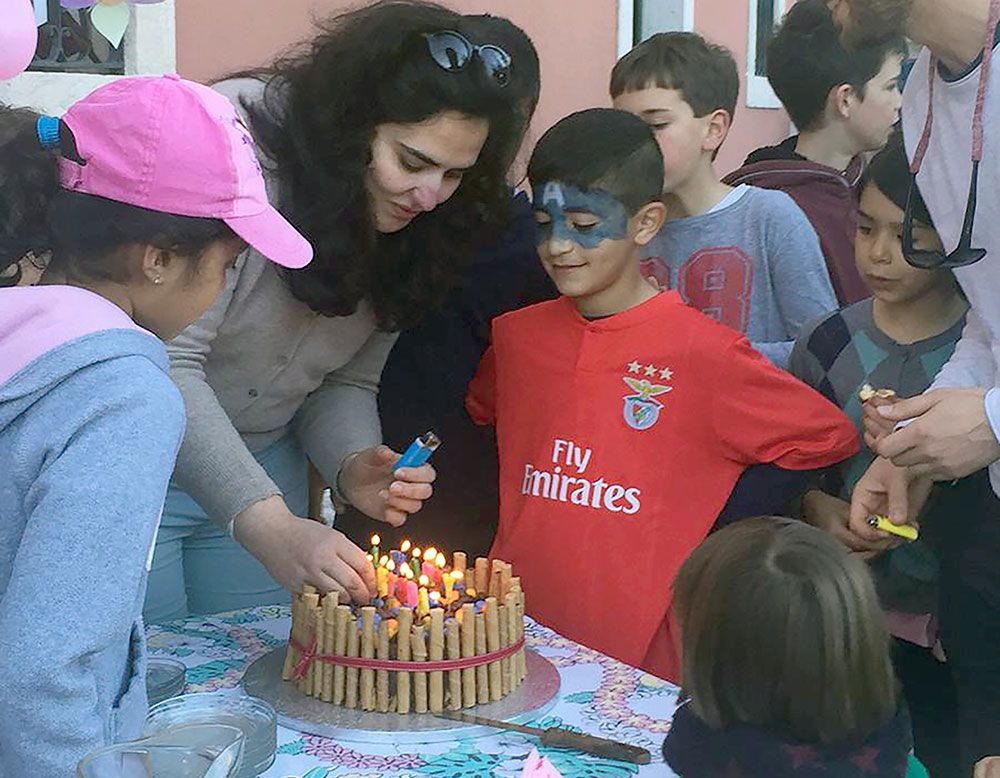 Ups and Downs of Insertion in a Foreign Country

Under a European Union relocation program, Portugal hosted families fleeing persecution and war, the majority of whom were from Syria. Here are the diverse stories of four refugee families seeking asylum and protection who were welcomed by a religious congregation.

The main event in 2016 regarding international protection was the deepening of the migration flows to Europe (around 1.3 million in both 2015 and 2016), in particular the massive flows from the Mediterranean region that crossed the Balkans to central and northern Europe.

Portugal, as an EU member, designed a strategy to respond to the immense movement of migrants arriving at the European continent. Its response focused mainly on collaboration and support management of flows in the countries where such movements enter–Greece and Italy–and took the responsibility over applicants for international protection.

Indeed, from 2015 until April 2018, under the relocation program, Portugal hosted 1,552 applicants for international protection. The majority of the applicants were from Syria (1,192) and were families of Syrian nationality.

In view of the urgency of intervention since the summer of 2015, the integration of people with refugee or subsidiary protection status has been a priority, especially those resulting from the flow peak 2015-16.

To attain this objective, the Portuguese government and civil society have been working together. More than 350 Portuguese organizations have decided to cooperate to respond to the needs of refugees in Europe and in countries most affected by this global humanitarian crisis.

Refugee Platform
In this context, the Congregation of the Servants of Our Lady of Fatima joined PAR as a host institution (Refugee Support Platform - www.refugiados.pt), a platform made up of local institutions that aims to provide a concerted response to the current global crisis.

The host institution engages its best efforts in helping the refugee families by fostering their integration in the local community for a period of two years, specifically with: learning the Portuguese language, attending school, finding employment, suitable financial independence, housing and healthcare access.

The Servants of Our Lady of Fatima (from now on, referred to as host institution) have received four families hailing from Syria. Their integration in Portugal has been diverse due to their expectations vis-à-vis their stay in Portugal, returning to their home country or moving to another country where they already have ­relatives.

First Family: Successful Integration
The first family arrived in Portugal in May 2016. Originally from Syria, they came to Portugal from a refugee camp in Greece where they stayed for about 7 months after time spent in Turkey.

By that time the family members were the father (32-year-old) and a son (seven-year-old), while the other members of the household remained in Syria, living in various places depending on the war.

This family came to Portugal under the EU’s relocation program and had hoped to regroup the remaining family as soon as possible. However, this was only possible in July 2019.

Regarding his educational background, the father, an electromechanical technician, spoke only Arabic. The son, besides his mother tongue, had some basic knowledge of English. The father acquired basic knowledge of the Portuguese language in a specific training course especially made for the integration of Arabic refugees.

However, he did not complete it, demonstrating grave difficulties in studying. Consequently, he started working in a precarious job and after that, he got an employment contract with another company.

Unfortunately, a few weeks after the family arrived, an accident made it impossible for him to work. As a persistent person he set about getting a taxi and a for-hire transport services driving license. On the other hand, the eldest son, after a specific summer program for refugees provided by an NGO, started attending a Portuguese school successfully.

Finally, the family was regrouped in July 2019.They live in their own residence in Lisbon. The mother attends a Portuguese language course and started as a trainer in a supermarket. The four children are in a school near where they live and have shown a good integration both in school and with their peers.

As of now, the family does not intend to leave Portugal. The father says that if he finds a permanent job for him and his wife the family will remain in Portugal.

Second Family: Difficult Insertion
Arrived in Lisbon in September 2017, this family, originally from Syria (Kurdistan), had spent one year living and working in Turkey when they applied to come to Europe under EU-Turkey Statement (1:1).

A big flat by the sea near Lisbon was provided as well as support for health care, clothing and social integration. The seven youngest children were enrolled in school by January of the following year, where they had specialized support for learning the Portuguese language. Meanwhile, a group of students offered voluntary weekly assistance to improve language learning.

The father never got a job in Portugal. The eldest son worked only for a month and the eldest daughter worked as a waitress for six months. Consequently, the family became financially dependent on the Monthly Family Allowance provided by the Government.

To facilitate the integration, the family moved to the interior of Portugal where there is a shortage of labor in agriculture and industry. The firstborn son works in industry, and the eldest daughter has a bakery. The father remains unemployed and is having a hard time learning Portuguese.

In February 2019 a new child was born. The mother is staying at home with the baby and doing some agricultural activities to produce a small number of goods for family consumption.

The children feel integrated at school and in the neighbourhood. One of them (12 years old) is under a special program for students with learning difficulties. The 17-year-old daughter gave up school.

Despite all integration efforts made by the host institution, there are no guarantees that the family will remain in Portugal. Indeed, this family reveals unclear objectives about the future. Their main aim is swift economic gain with minimal work.

Third Family: Short Sojourn
The third family arrived in Portugal in January 2017. It consisted of the father, mother, and seven sons and daughters, of which three are adults. They came from Syria and spent 10 months in a refugee camp in Greece. They speak only Arabic, but one of the daughters had a rudimentary knowledge of English.

Though the family had been hosted in a suitable home in the suburbs of Lisbon, they left the host institution without informing anyone. They only stayed 18 days in Portugal.

Fourth Family: Sudden Departure
When the fourth family arrived in Portugal (May 2017) the host institution lodged them in a single-family apartment by the sea near Lisbon; clothing for all members was provided, as well as an allowance for expenses.

Integration in the employment market was important. Learning the Portuguese language was indispensable for the head of the family for him to exercise his profession since he was a supervisor in the construction industry. The other two adult members of the family that would like to continue their studies in Portugal also needed to learn Portuguese.

Consequently, the access to Portuguese classes for foreigners was assured. The children’s access to education was also guaranteed by the host institution that helped in their enrollment at the school of the hosting area.

Assistance in accessing the National Health System, in the health care center of the area of residence, and accompanying the family in their first medical appointments was assured too, particularly because the mother of the family was pregnant.

Nevertheless, the family left the premises without informing the host institution after five weeks in Portugal. The following day their children should have started attending school.

Positive And Negative
Staying in Portugal brought positive aspects to these four families such as: physical security to the family members; access of the children to education and the possibility of being able to grow up safely; and opportunity for new social and professional/academic achievements.

Nevertheless, some negative aspects can be presented: delays in the process of family reunification with evident consequences in the family stability and in the psycho-affective development of the four children); lack of motivation of the adults in learning the Portuguese language; the absence of a Syrian community in Portugal; and the relocation of family members to other countries, namely in Germany.

Finally, these four histories, though very diverse, remind us that refugees and asylum seekers must be seen as people who carry out a specific and unique life history, who seek a new and successful life cycle away from the realities they have known and suffered.

A Cry for Liberation

There is a plethora of motives for the veneration of the image of the suffering Christ. For some devotees, it means a pious exercise of atonement, while for others it is a simple heartfelt…