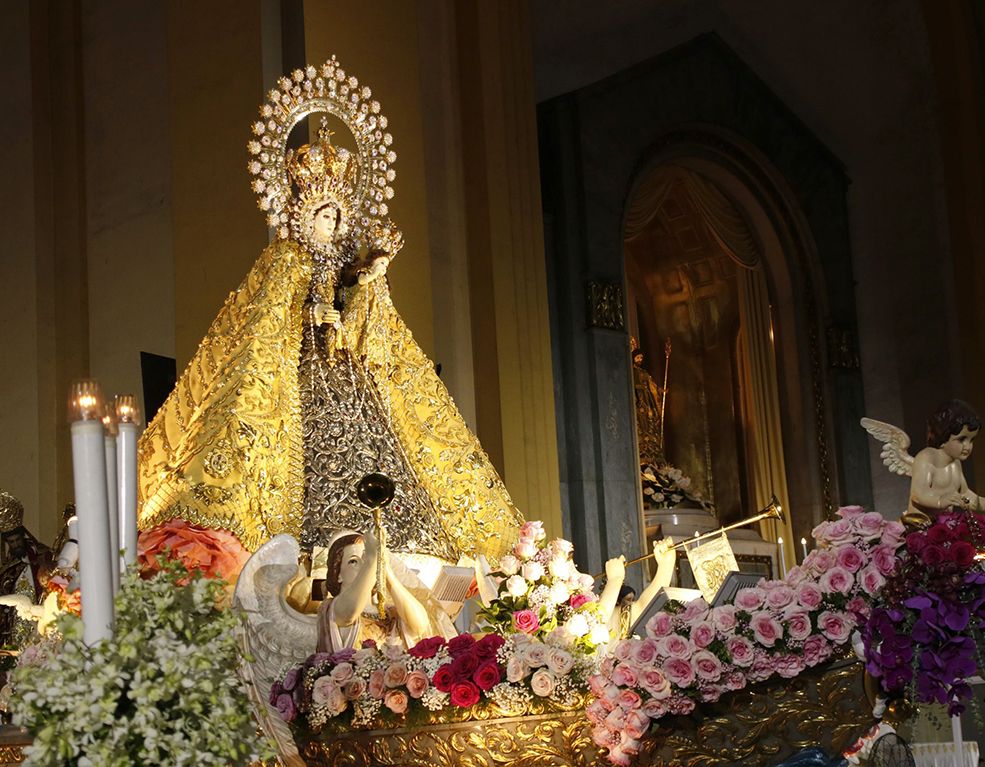 The love of the Filipino people for the Blessed Virgin Mary is well-known and gives origin to devotional practices like “Simbang Gabi” and “Flores de Mayo”. But the most evident feature is the existence of the Marian shrines and their role in the history and the life of the nation.

The story of our Lady of La Naval de Manila  is exemplary of the importance of Marian devotion in the evangelization of the Philippines.

The devotion to La Naval started out of the people’s concrete experience of danger from a powerful Protestant Dutch armada that threatened to seize the Philippines, which by then had embraced the Catholic faith brought to the islands by the Spanish colonizers.

The much inferior Filipino-Spanish warriors managed to sink the more powerful warships and the indubitable fighting spirit of the Dutch to the bottom of the sea through five encounters that took place from March 15 to October 4, 1646.

While the lopsided exchange of skirmishes was raging, Filipinos and Spaniards were having a procession along the streets of Intramuros, unceasingly praying the rosary. Attributing the feat to the intercession of our Lady, the people started to hold the novena prayers each year to celebrate the victory and to remind themselves that our Lady of La Naval wanted them to hold on and to deepen their Catholic faith.

Ancient Ivory Icon
La Naval de Manila is the oldest, grandest and most historically significant Philippine-made ivory icon. It was made in Binondo during the early Spanish era by a Chinese man who converted to the faith after its creation. The artistry of the image itself contributes to the spontaneity of the devotion.

The elaborate crown, the exquisite gown, and the chiseled symmetry of the Lady’s face and Baby Jesus are a feast for the eyes. It has been considered miraculous many times in the four centuries of its existence.

Thousands of people usually take part in the grand procession from Sto. Domingo Church, with the floats carrying the statues of many saints, accompanied by band music and prayers. Bishops figure prominently in the yearly celebrations as preachers and Mass presiders which helps the devotion to abide by orthodoxy and sobriety.

An Instrument Of Protest
Marian devotion can be and was at times an instrument of protest. An example is its contribution to the dismantling of Marcos’ dictatorship that kept the country under martial law for over two decades. The abuses reached their apex with the assassination of Benigno Aquino in 1983. His remains, together with the bloody clothes he wore on the tarmac after the fatal shooting, were carefully laid near the altar of our Lady of La Naval de Manila in Sto. Domingo Church.

Three years later, when people trooped to EDSA, the image of La Naval de Manila was also in the middle of the rallies inspiring the people. There were no guns, no bullets, and no violence in those rallies. Instead, rosaries were held by the Catholic faithful in their bare hands as the image of our Lady of La Naval stood aloft in its silver float.

Other Marian Shrines
Our Lady of the Most Holy Rosary is also venerated in Pangasinan. The ivory and silver image which bears this title dates from the 16th century and is presently enshrined within the Minor Basilica of Manaoag. The shrine is a major pilgrimage site in the country and is administered, like La Naval de Manila, by the Order of Preachers, within the Archdiocese of Lingayen-Dagupan.

Our Lady of Peace and Good Voyage, also known as Our Lady of Antipolo, is a 17th-century Roman Catholic wooden image of the Blessed Virgin Mary. The image, a Black Madonna that represents the Immaculate Conception, is enshrined in Antipolo Cathedral.

The image was brought to the country from Mexico by the galleon El Almirante in 1626. The safe voyage across the Pacific Ocean was attributed to the image, which was given the title of “Our Lady of Peace and Good Voyage.”

The title was proven true later by six other successful voyages of the Manila-Acapulco Galleons with the image aboard as its patroness. The statue is one of the most celebrated images of the Blessed Virgin Mary in the Philippines, gaining devotees since the mid-19th century, having been mentioned by José Rizal in his writings.

Our Lady of Peñafrancia is venerated in Naga City, Bicol. The image comes from the original image enshrined in Salamanca, Spain. It is currently housed at the Peñafrancia Basilica. Every September, the novena festivities are held in honor of the image as the principal Patroness and Queen of Bicol.

Marian devotion is born of a people’s faith across the centuries. The Filipino people are rightly called “un pueblo amante de Maria” (a people who love the Virgin Mary).

The life of the Filipino villages and parishes is built around the “Fiesta”, a yearly celebration of the Patron Saint which includes the preparations, the solemn Mass, the procession with the images…