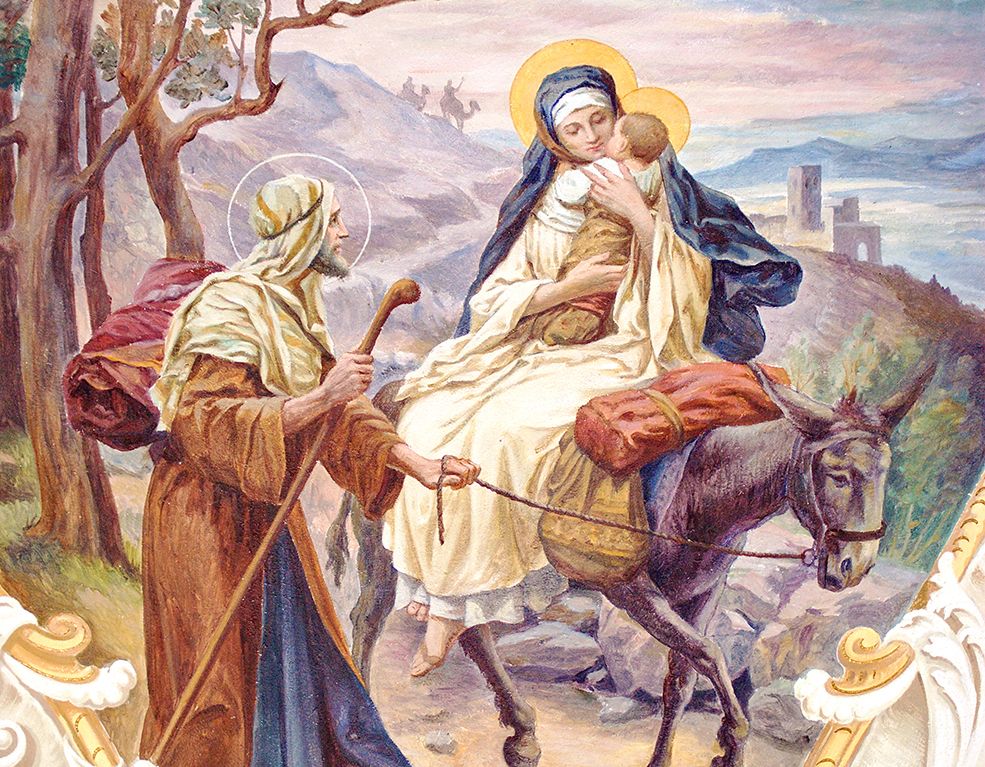 Saint Joseph, “the just man” as the Gospel calls him, embraced God’s plan even though it was difficult to understand. He accepted Mary as his wife and protected the child Jesus in a creative way. He is a model of faith.

Pope Francis once said that “true interior healing is to accept our personal history and embrace even the things in life that we did not choose.” This is a good description of St. Joseph. He found himself in the eye of a hurricane: God’s plan, a plan difficult for humans to understand, affected many of his own plans. Yet, instead of running away, he committed himself to find a way.

We can imagine Joseph, a young professional, at the end of a hard working day. He went to see Mary, his fiancée with whom he would soon complete the marriage process, and she would become his wife. But, in that evening, things did not go as expected. He received the news that she was with child, a child that he certainly was not responsible for. Joseph was told that this was due to the action of the Holy Spirit. It was not an easy reality to face.

Just Man
Joseph felt his world give way under him. How could that be? He loved Mary and had plans to build a family with her. Now he was left with little space to maneuver. He could not go ahead with his plans. Mary was expecting a baby from someone else. The trouble was that, following the Law, he would have to report Mary’s behavior to the authorities. There was a strong possibility that she would be sent away from Nazareth forever, or even condemned to death by stoning.

Joseph was a just man who always wanted to follow the Law. However, what does one do when the Law seems so inhuman? There must certainly be a way to spare Mary’s life. Joseph’s heart was in turmoil, and he was not sure from whom he could ask for advice. Tossing and turning on his bed, he tried to find a solution to his problem. Finally, he decided. He would find a solution to send Mary quietly away. He would still be following the dictates of the Law, and at the same time spare Mary’s life. After all, God is a God of mercy and He would not disagree with his solution. He finally was able to sleep, and then he had a dream.

Mystical Experience
Receiving the visit of an angel in the Bible is a figure of speech. Since no one can see God and live, God comes to the person through an angel. The evangelist Matthew wants to tell us that Joseph had a mystical experience. Why in a dream? Because this is what happened to Joseph of the Patriarchs, Jacob’s son, the one sold to slavery in Egypt and who started the journey that led to the Exodus. That Joseph often received divine messages in dreams. Matthew wanted to draw a parallel here, which continued when he wrote about Joseph of Nazareth going to Egypt to run away from the danger posed by King Herod.

In this mystical experience, our Joseph received an annunciation! What you want to do is good, God approved, but you must be even braver. Take Mary with you as your wife, what is happening in her comes from God. Be a father to the newborn, call him Jesus. Once he woke up, Joseph did as the voice in the vision told him to.

The Gospel of Matthew continues the narrative. Joseph was shown making decisions, listening to the Word of God and obeying. Thus, he stirred through a difficult time and protected his new family. A man of few words–none is recorded in the gospels–yet a man of deeds.

Man Chosen By God
In his Apostolic Letter Patris Corde, Pope Francis notes “an important element: creative courage. This emerges especially in the way we deal with difficulties. In the face of difficulty, we can either give up and walk away, or somehow engage with it. At times, difficulties bring out resources we did not even think we had. As we read the infancy narratives, we may often wonder why God did not act in a more direct and clear way. Yet God acts through events and people.

Joseph was the man chosen by God to guide the beginnings of the history of redemption. He was the true “miracle” by which God saves the child and his mother. God acted by trusting in Joseph’s creative courage.”

We are used to speaking of Joseph as a carpenter. We refer to him as a woodworker, most probably an amble person who found it difficult to carve a decent living in a poor environment. However, this impression was created from the wrong interpretation of the evangelical texts. In the Greek version, the original language in which the Gospel was written, Joseph is called a tecnon, as also Jesus was. Tecnon is not a carpenter; its current equivalent would be an engineer. Joseph was a man trained to design buildings and capable of following the different stages of their construction.

Certainly, he would have been busy with manual work but he had the oversight on the whole process. In other words, Joseph was a practical man, able to make important decisions based on his knowledge. He was ready to take the responsibility of his choices, and he minded the wellbeing of those entrusted to him. He was also creative. You need creativity to see problems from a different perspective. You need creativity to find a solution out of the box. You need creativity when the possible ways out are not those anticipated by routine and tradition.

Man Of Prayer And Discernment
Matthew does not say much about Joseph. However, he gives us the essential to understand him. He was a just man. With this word, the evangelist wishes to let us know that Joseph was a man who genuinely sought communication with God. He listened to His Word. He pondered it in his heart. He refused to read the Law as a divine word engraved in stone, unchangeable.

He realized that God’s will must be discerned. Joseph was not a fundamentalist: a person who refuses to take responsibility and hides behind the words as they are written down. Joseph was shown to be dynamic, resolute, even to the point of making a decision that could seem against the Law. Deciding to divorce Mary quietly was his effort to follow God’s will and, at the same time, preserve the life of the person he loved. In other words, Joseph was a man of prayer and discernment.

Pope Francis reflected on this and noted “the Holy Family had to face concrete problems like every other family, like so many of our migrant brothers and sisters who, today too, risk their lives to escape misfortune and hunger. In this regard, I consider Saint Joseph the special patron of all those forced to leave their native lands because of war, hatred, persecution and poverty. At the end of every account in which Joseph plays a role, the Gospel tells us that he gets up, takes the child and his mother, and does what God commanded him.” (Mt 1:24; 2:14.21)

Pope Francis refers to Joseph as a creative, but also courageous, father. We can see his courage in acting, yet also in opposing the plans of the powerful. Joseph did not openly challenge the powers that wanted Jesus dead. But he took the decisions that would allow Jesus to survive and grow before starting his public ministry. He also kept a keen eye on the events of the day. “When Joseph heard that Archilaus had succeeded his father Herod as king of Judea, he was afraid to go there … and he went to the region of Galilee.” (Mt 2:22)

In that, he shows us how important it is to remain firmly attached to reality. Though a man of dreams, he did not let his imagination wander in unsteady territory. He discerned the dreams he had, but he also checked them against the reality he lived in.

Today Joseph remains an important figure for our faith. Like him, we are invited to continuously check our decisions alongside the Word of God. We are challenged to face difficulties and relationships, constantly asking ourselves where the will of God lies. He remains an example that, by listening to God, we may also be able to play our part in the building of His community.

Do You Want to be Well Again?

We may understand medicine like never before, but we don’t understand Christ’s healing. Healing itself comes primarily from God through love.