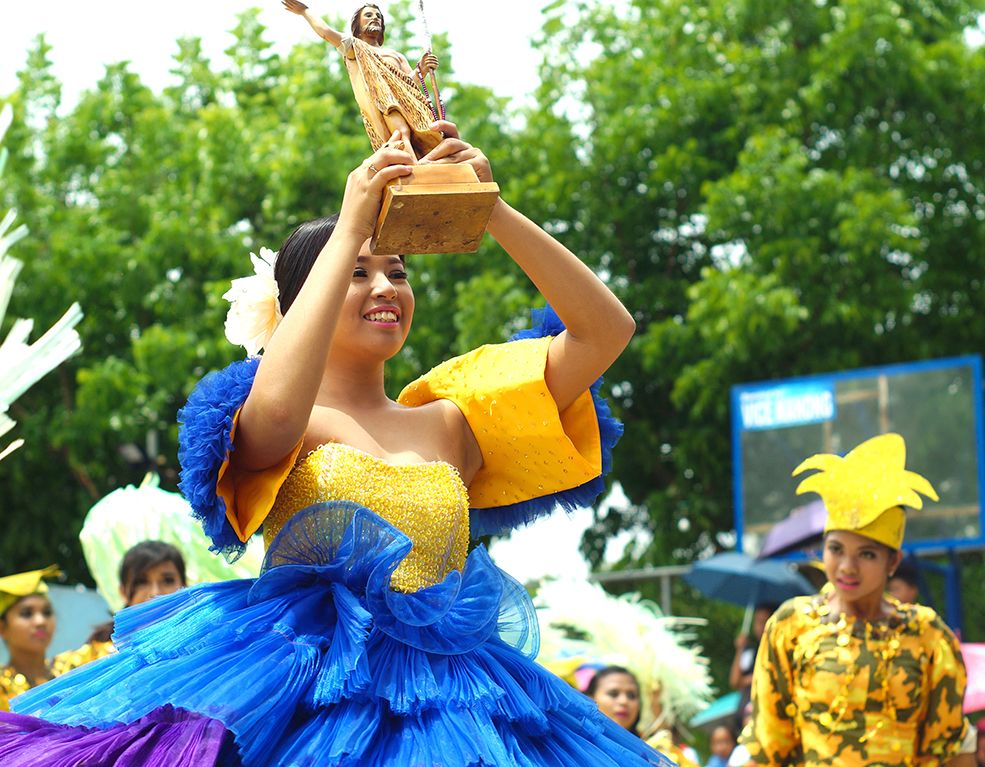 Feast of St. John the Baptist

Communities throughout the Philippines rejoice on the feast day of St. John the Baptist (June 24) by splashing everybody on the street with buckets of water. Aside from the usual dousing with water, Filipinos feast on lechon and have a mud parade, water party and grand boat parade.

Back in Biblical times, St. John was often thought of as the Messiah prior to the revelation of Jesus’ coming. Instead, St. John became the deliverer of God’s message of salvation. Born on March 25, 7 B.C. to his mother, Elizabeth, John lived to become a follower of Christ who baptized people.

He had the honor of baptizing Jesus Himself in the River Jordan.  He became God’s messenger, telling people of the Messiah, the Savior, who is yet to come.  At first, John asked Jesus why He wanted to be baptized when it’s Jesus Christ who should be baptizing John. He obliged, followed the request of Jesus Christ, and baptized Him, leading to the baptism ministry of John. The Heavens opened up with the descent of the Holy Spirit.

Did you know that among the Saints, the birthdays of the Blessed Virgin Mary and St. John the Baptist are the only occasions celebrated in the Catholic calendar? Others are either commemorated on their death or other significant dates.

Communities throughout the Philippines have festivals celebrating St. John the Baptist. For instance, the City of San Juan is famous for their Wattah Wattah Festival (Basaan Festival) that translates to “douse with water.” St. John is the patron saint of San Juan. It is a big festivity with nationwide news coverage. In Manila, June 24 has been declared as a special non-working holiday.  Everybody on the streets, whether as a commuter or passerby, and the varied travelling modes of transportation would be splashed with buckets of water.

At Daet, Camarines Norte, there is a Parish called St. John the Baptist Church (Parroquia de San Juan Bautista). The Parish celebrated its 400th year foundation in 2011. Named after St. John, one of their traditions is to hold a big feast to welcome various guests into their homes during St. John the Baptist’s birthday. An array of delicious food is prepared for the fiesta with merry-making.

Who knew that there are more ways to celebrate the birthdate of St. John the Baptist?  According to the My Pope Philippines website writer, Joy Rojas, there are four additional fun ways in which the Filipinos gather together to celebrate the feast day of St. John. In various parts of the Philippines, aside from the usual dousing with water, Filipinos celebrate by: feasting on lechon (roasted pig) in Batangas; Nueva Ecija has a mud parade; in Cavite they have water party; while in Bulacan and Mindoro there is a grand boat parade.

Lechon
Lechon is one of the traditional native delicacies in a Filipino party, so it is no surprise that we also celebrate the feast of St. John the Baptist with lechon. At first, they have a lechon parade at Balayan, Batangas. They start by roasting the pigs on the streets. Then, they bring it to the Church of Immaculate Conception for its blessing. While they have the street parade of lechon, the attendees are also splashed with water and can partake of the lechon.

Locals of Bibiclat, Nueva Ecija, dress up with mud known as taong putik.  The Taong Putik Festival is also known as pagsa-San Juan.  Carrying a statue of St. John the Baptist, the taong putik go from house to house barefoot, asking for candles or alms to buy it.

After which, they all gather at their community’s parish for the traditional prayers and lighting of candles. Historically, their devotion to St. John was strengthened when the lives of their men were spared from a Japanese firing squad after the locals prayed to St. John the Baptist during the Second World War.

From the Spanish word regar, the Caviteños celebrate a week-long festivity called Regada.  It also refers to the sprinkling of water. The Regada Water Festival takes place right at the heart of Cavite City.  It is a lively street parade of live shows and concerts filled with music and dancing events.

At Calumpit, Bulacan and Pola, Oriental Mindoro, a fluvial (river boat) parade that is similar to our September celebration of Our Lady of Peñafrancia is held.  It is known as Libad Festival at Bulacan.  They traverse at highly decorated, multi-colored pagodas. It is normally scheduled on the eve of St. John the Baptist's fiesta on the 23rd of June.

They then have their annual town fiesta to honor St. John. While dancing and gaily singing, the town folks splash people with water on frenzy. There is a street procession first at Oriental Mindoro before they embark on a boat with the statue of St. John the Baptist. With the customary splashing of water and wearing native outfits, they splash each other with water, shouting:  “Viva San Bautista!”

The Feast Day of St. John the Baptist will always be known as the day when people are splashed with water.  Jesus’ baptism by John is the Lord’s way of announcing that He is about to begin His ministry on earth.  He wanted to set an example for His followers that the baptism of water is the way to repentance.

Nueva Ecija’s Parish Priest, Rev. Fr. Elmer Villamayor, reiterated to the parishioners to practice what St. John did in his life: witnessing Christ as the Messiah even when one is up against “big people” like King Herod. As reported by Philippine News Agency, Fr. Villamayor said:  “Mamuhay sa totoo, huwag sa kasinungalingan,” for people to live in truth and not in lies.  After all, “Jesus is The Way, The Truth and The Life.”   This dousing of water is a tradition most common to Filipinos only.  So, get ready to get wet!

A missionary shares how he contemplates on the holy night of the Easter Vigil, the “star that never fades,” who is the Risen Christ. He is not only the brightest star but also the king of all stars…

Tom Catena is an American doctor. He practices his profession in a particularly difficult area of Sudan–more precisely in the Nuba Mountains. Out of nowhere, he has opened a hospital and everyday he…