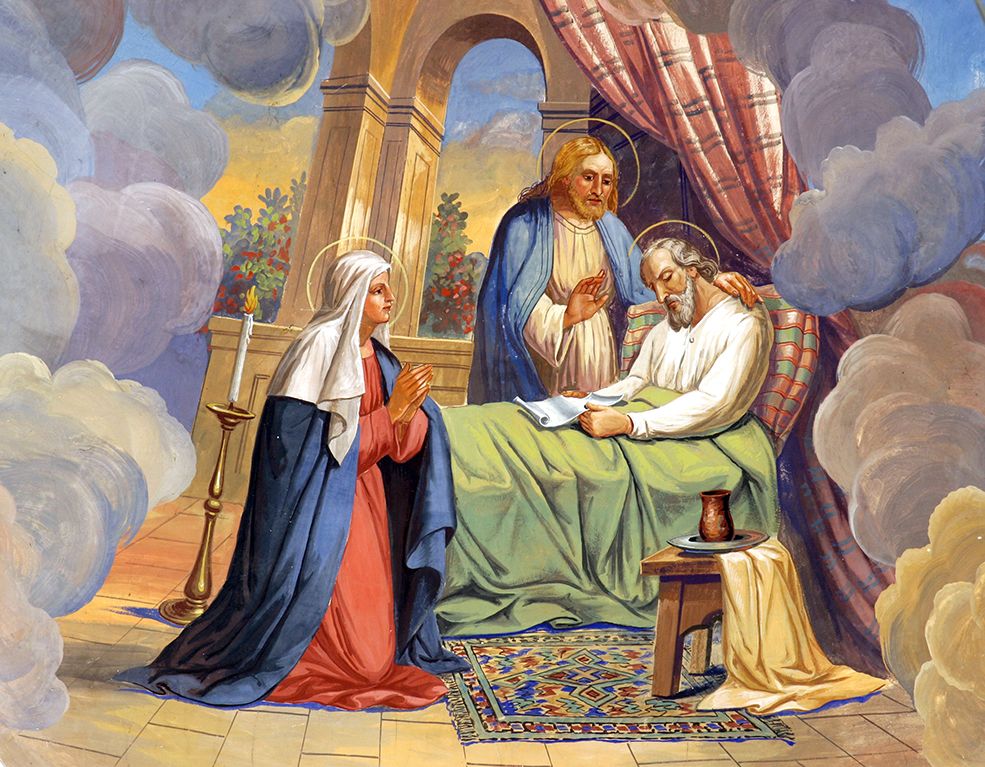 By James Martin | Society of Jesus

The COVID-19 pandemic that claimed many lives and continues to overwhelm the whole world, has obliged many people to live isolated and hidden. Saint Joseph, the foster father of Jesus who lived a hidden life, is more than ever the patron saint we need in these trying times.

Pope Francis announced the Year of St. Joseph in honor of one of his favorite saints. With his apostolic letter Patris Corde (“With a father’s heart”), the pope invited the universal church to meditate on and pray for the patronage of the foster father of Jesus.

Joseph’s example and patronage come at the perfect time. At a time when a global pandemic has forced millions to live hidden away, isolated and alone, we can see Joseph as a model of the hidden life. We know, too, that Joseph died before Jesus’ public ministry; Mary’s husband was undoubtedly familiar with suffering. So we can see him as our patron, too, praying for us as he understands our struggles with illness.

But what do we know about our patron and companion? Like many saints whose lineage can be traced back to the earliest days of the church, very little is known of St. Joseph, besides what we learn from the few lines written about him in the Gospels. He was of King David’s line and engaged to a young woman from Nazareth. Mary was found, quite unexpectedly, to be pregnant. But Joseph, “being a righteous man and unwilling to expose her to public disgrace,” as the Gospel of Matthew tells it, planned to dissolve his betrothal quietly. Even before Jesus was born, then, Joseph’s tender compassion and forgiving heart were on full display.

But God had other plans. As with another troubled Joseph–a patriarch in the book of Genesis–God used a dream to reveal his redemptive plans for the carpenter from Nazareth. In the dream, an angel let Joseph in on Mary’s secret: “Joseph, son of David, do not be afraid to take Mary as your wife, for the child conceived in her is from the Holy Spirit.” That same angel, after the birth of Mary’s son, advised Joseph to take the child and his mother to Egypt to flee the murderous King Herod. And Joseph listened.

There are a few more stories about the boy Jesus–he is lost on a journey and found teaching in the temple–and then we reach the hidden part of our savior’s life. All the Gospel of Luke says about those 18 years is this: “And Jesus increased in wisdom and in years, and in divine and human favor.”

A Time Of Joseph
Those years were Joseph’s time–a time spent caring for his foster son and teaching him carpentry. In Joseph’s workshop in Nazareth, Jesus would have learned about the raw materials of his craft: which wood was best suited for chairs and tables, which worked best for yokes and plows. An experienced Joseph would have taught his apprentice the right way to drive a nail with a hammer, to drill a clean and deep hole into a plank, and to level a ledge or lintel.

Joseph would also have passed on to Jesus the values required to become a good carpenter. You need patience (for waiting until the wood is dry and ready), good judgment (for ensuring that your plumb line is straight), persistence (for sanding until the tabletop is smooth), and honesty (for charging people a fair price).

Alongside his teacher, a young Jesus labored and built, contributing all the while to the common good of Nazareth and the surrounding towns. It is not difficult to imagine that the virtues Jesus learned from his teacher—patience, judgment, persistence, and honesty—served him well in his later ministry. Joseph helped fashion Jesus into what the theologian John Haughey, S.J., called “the instrument most needed for the salvation of the world.”

Early Death
But almost as soon as Jesus started his ministry, Joseph disappears–at least in the Gospel narratives. Significantly, Joseph is not listed among the guests at the wedding feast at Cana, which marked the beginning of the public ministry of Jesus. Did he die before his son had reached adulthood?

At an art exhibit at the Cathedral of St. John the Divine in New York City several years ago, I came upon a portrait entitled “The Death of Saint Joseph.” In the huge portrait, painted by Francisco Goya, an ailing Joseph lies in bed. Standing beside his bed is a youthful-looking Jesus, perhaps 16 or 17 years old, beardless, wearing a long tunic, eyes trained intently on Joseph. Sitting by the bed is Mary.

Goya’s painting beautifully captures the sadness that must have surrounded the early death of Joseph. A similar sadness has been with us for many months, the sadness that surrounds the deaths of so many from Covid.

Joseph is traditionally invoked as the patron of a “happy death.” But his could not have been a happy death for Jesus or Mary. The Gospels tell us nothing about their mourning. There are no lines about Mary’s grief, no verses about Jesus’ sadness. The Holy Family, then, is like many families today who grieve the loss of parents and grandparents, aunts and uncles, brothers and sisters, and children during this pandemic. So much of their grief, too, must be done in isolation, not appearing in any headlines.

Hidden Life
The hiddenness of Joseph’s life can also speak to those overwhelmed by the pandemic, who wonder if God is with them, if God sees. Appearing only briefly in the Gospels, given no words at all to speak, Joseph leads a life of quiet service to God, a life that remains almost totally unknown to us. And yet his life—filled with countless hidden, unseen, unrecorded acts of love—was of infinite value. Joseph’s life says to all of us, “God sees.”

His hidden life is intimately shared by millions of people making their way through the pandemic: the health care worker on the frontlines whose sacrifices are hidden even from her family. The single parent who cannot confide to anyone her intense worry about her children.

The adult child of an aging parent living in a nursing home, terrified about the spread of illness among elderly residents. The checkout person, the public transit worker, the maintenance person, barely eking out a living before this year’s economic crisis, who now have no way of “working from home.” The priest, who has celebrated countless funerals for Covid victims and their families, worried that he wasn’t able to comfort them as he would hope to. The Covid patient dying alone, weeping in frustration and anguish, wondering what is happening.
So many hidden lives. So many unseen acts of love in this pandemic. So many secret prayers raised to heaven. The husband of Mary and foster father of Jesus understands them all.
St. Joseph, patron of the hidden life, patron in this pandemic, pray for us, this year and forever.

As societies around the world cope with the spread of Covid-19, pro-abortion activists in various continents, especially North America and Europe, have been trying to use the coronavirus pandemic to…

Imprisoned in Vietnam for 13 years, nine of them in solitary confinement, Cardinal Francis Van Thuan represents the resilience and fidelity of Catholics who suffered persecution because of their…