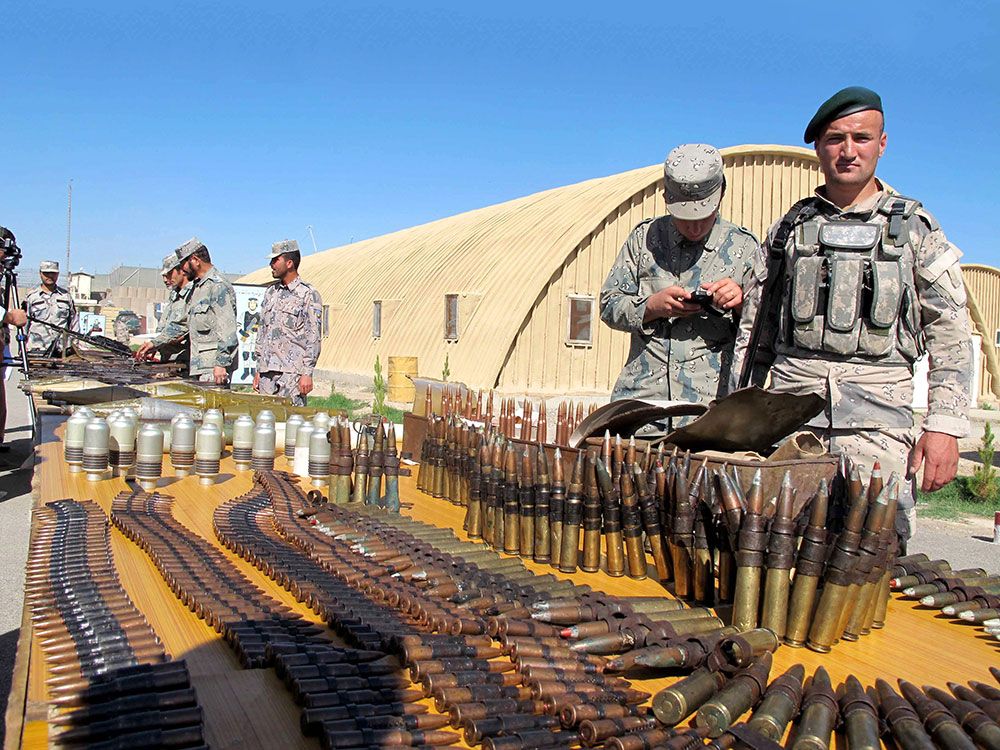 The supply of deadly military weapons is the reason for the continuation of wars that result in atrocious suffering for civilian populations. Civil society groups have to exert more pressure so that international treaties limiting the transfer of arms can be implemented.

Every year between half a million and 750,000 civilians are killed by military weapons; a very large percentage of these deaths are caused by small arms and light weapons. Some warring factions simply do not care how many innocent victims their combat causes. In some conflicts, blatantly killing and maiming civilians is a deliberate strategy to terrorize local populations and create chaos. No one keeps track of the exact numbers of the dead and wounded, in part due to the confused and conflicting information coming from areas of conflict.

The origins of these conflicts and the mechanisms that sustain them are often quite complex. However, one factor is a constant: the supply of deadly military weapons.

Stocks of weapons may have been built up over time through “legal” commercial trade between countries. Weapons may have been diverted or re-sold from a legitimate purchaser to an unlisted and illegitimate buyer, whether a country or a “non-state-party.” Large shipments of weapons are also obtained through the expensive services of illicit arms dealers. In many African conflicts, “blood diamonds” or “blood minerals,” often extracted by slave labor, have provided the immense funds required to purchase the weapons from arms smugglers.

In any of the above cases, or when local conflicts come to an end, weapons often end up in the black market. Black market weapons may be transferred to a new area of conflict or they may end up in the hands of criminals. After the civil wars in Angola, Mozambique and Zimbabwe ended, criminals in South Africa often had more firepower than the police. They were able to engage in vicious and devastating attacks on armored cash-in-transit vehicles with a large measure of impunity. Many weapons have long lives and continue to be usable for decades, such as the infamous Kalashnikov rifle (AK-47).

Who manufactures these weapons?

According to the Stockholm International Peace Research Institute (SIPRI), over recent decades, the United States of America has been consistently the biggest manufacturer and merchant of arms in the world. In 2011, the U.S.A. broke all records, providing nearly 70% of the weapons going to the world’s poorest nations. In addition to selling weapons for profit, U.S.A. also “gives” weapons to poor nations to gain political influence. When expensive and sophisticated weapons, such as a previous generation of military fighter jets, are given to a poor nation, that nation must then divert scarce resources from caring for basic needs (i.e., medical care, sanitation, potable water and education, infrastructure) to train pilots and mechanics to use and maintain those weapons.

Russia is the second-largest producer and exporter of military weapons with roughly one fourth of all transfers. China has overtaken France to move into third place with 6% of sales. France, Germany, Britain, Spain and Italy are together responsible for roughly one fifth of the arms sales. SIPRI, gathering information from publicly accessible information, estimates that total legal and publicly known arms sales were worth at least $76 billion in 2013.

All the governments of major arms-exporting nations claim that they have set strict legal and ethical standards for the approval of export licenses for arms sales. However, all of them are too willing to waive these standards when “national interests” come into play, such as gaining political influence in a contested area of the world, or keeping a nation as an “ally,” or even just maintaining manufacturing jobs at home.

The Program of Action (the “POA”) to Prevent, Combat and Eradicate the Illicit Trade in Small Arms and Light Weapons in All Its Aspects of 2001 supplements the United Nations Convention against Transnational Organized Crime. Its purpose is to urge nations and regional bodies to establish “laws, regulations and administrative procedures to exercise effective control over the production of small arms and light weapons … and over the export, import, transit or retransfer of such weapons in order to prevent illegal manufacture of and illicit trafficking in small arms and light weapons, or their diversion to unauthorized recipients.” The POA has not been very effective, in part because there were no universally recognized standards regarding arms transfers; each nation or region sets its own standards. Many nations also failed to even report on the arms transfers that they had sanctioned.

However, the United States and other arms-exporting countries saw the proposed treaty as primarily a commercial treaty to legitimize commerce in weapons. They used a variety of stratagems to weaken the treaty’s limits on arms transfers: requiring all provisions to be unanimously approved, limiting the types of weapons covered, setting lower standards for transfers of ammunition, eliminating binding language as much as possible, and requiring that 50 nations ratify the treaty before it would go into effect. These actions resulted in the failure of the negotiations in 2013.

Nonetheless, a strong group of nations brought the draft text to the U.N. General Assembly. The Arms Trade Treaty (ATT) was adopted by the U.N. General Assembly on 2 April 2013. The 50 ratifications required for the treaty to go into force were obtained in less than a year and the ATT entered into force on 24 December 2014. To date, 130 states have signed and 87 have ratified. Once again U.S.A., which has signed but not ratified the treaty, and other major arms-exporting nations are doing what they can to weaken the implementation of the ATT.

The Arms Trade Treaty was negotiated in the U.N. after hundreds of civil society organizations forcefully and persistently lobbied their governments demanding a humanitarian treaty. When a very large number of nations supported the effort in the United Nations, other nations were pressured into taking part in the negotiations.

Now, it is necessary to involve civil society in a massive way once again to make the ATT more effective. If like-minded civil society organizations throughout the world exert adequate pressure, the ATT can be strengthened and implemented.

U.S.A. has promised Israel $38 billion in military aid when Israel used powerful and sophisticated weapons to destroy thousands of civilian housing units in Gaza. An African proverb states that when elephants fight, the grass gets trampled. Countries and undercover arms merchants continue to sell weapons to the competing factions in South Sudan. Parts of the Democratic Republic of Congo are overrun by armed groups that never seem to lack weapons or ammunitions. Unlicensed arms merchants are often tolerated, if not protected, by countries that use them to advance geopolitical interests or gain access to minerals “on the cheap.”

It is time for civil society organizations to stand up and be counted in every country where they have the freedom to speak out. It is time to make the armaments industries liable for the devastation caused by their “products.” It is time for those countries that are not manufacturing or selling weapons to stand up to those that do and make them liable for the consequences of their greed and irresponsibility.

The beatification of 17 new martyrs, in the Laotian capital, was a historic event for a tiny minority Church in a country ruled by a communist regime. For the good of the people of Laos, Church…

If it does not do something drastic now, the Philippines would be the first country in Asia to completely lose its forest cover soon.  Experts say that the country lost most of its forest in the past…