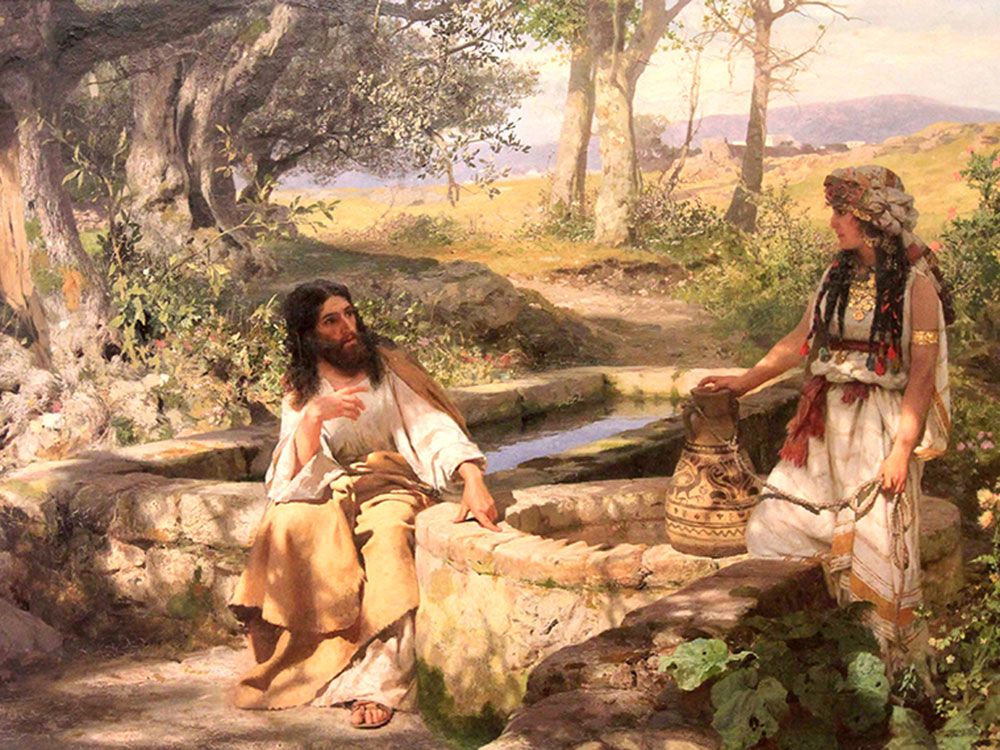 The fountain of happiness

In her encounter with Jesus, the Samaritan woman recovers the sense and the reason to live. This is the grace we seek as we enter into this narrative: to know the gift of God, which Jesus has to offer to those who encounter Him.

Jesus’ encounter with the Samaritan woman, at the well of Jacob in Shechem (now Askar, at the foot of Mount Ebal) is told in the Gospel of John 4: 1-42. The name of the woman is not recorded in the text, perhaps to identify her with all those men and women who, in the midst of the contradictions of their lives, seek a way out, a new meaning to live.

We come to understand that it is an encounter, a surprise encounter, not foreseen nor probable, in the normal routine of life. It happens at an inappropriate time. The meeting takes place at noon, the hottest moment of the day. Women usually come to fetch water at the well, either in the morning or in the late afternoon, at cooler hours. Then the encounter takes place at the well, a symbolic place in the rich Jewish imaginary of the time.

An Old Testament tradition links the encounters of men and women at the well with a special mission, in which both are chosen in God’s design (Abraham’s servants in Genesis 24:11, Jacob and Rachel in Genesis 29, 1ff; Moses and the daughters of Reuel, in Exodus 2: 15ff). Moreover, the encounter of a man with a woman at the well, in the popular imaginary, leads us to think of men’s courtship of women, which leads us to consider these meetings as inappropriate for our characters, for Jesus and His disciples. In fact, the disciples cannot disguise the surprise and the criticism, when they see Jesus talking to a woman, alone, by the well.

In John’s narrative, there is yet another detail that surprises us. Apparently, the meeting is for random reasons. The woman is going to fetch water at the well, at noon, to avoid other women, their criticism and their condemnatory looks because of her marital situation. Jesus, for His part, goes to the well looking for water because He is tired from the journey and He is thirsty.

The evangelist John introduces in his narrative a word that helps us to see the situation happening beyond the immediate reasons that determine it. He says that “He had to pass through Samaria.” [Geographically, Jews often bypassed Samaria by taking a route across the Jordan.] This expression “He had to...” has a strong theological resonance in the Gospel of John: it is necessary to worship the Father ... so must the Son of Man be lifted up... it is necessary for the Son to go to the estranged brothers ... Here is the Samaritan woman and the Samaritans. In John’s account, there is a look, a divine reason which involves these encounters with Jesus beyond the fortuitous circumstances in which they occur.

The encounter leads to a dialogue of Jesus with the Samaritan woman whose words attract by their beauty. Jesus says: “If you knew the gift of God and who is saying to you, ‘Give Me a drink,’ you would have asked Him and He would have given you living water.” “Whoever drinks the water I shall give will never thirst; the water I shall give will become in him a spring of water welling up to eternal life.” The Samaritan woman answers Him, “Sir, you do not even have a bucket, and the cistern is deep; where then can you get this living water?”… “Sir, give me this water ... Sir, I can see that you are a prophet ...”

The climax of this dialogue is the personal revelation of Jesus. The Samaritan woman says to Him: “I know that the Messiah is coming… and that when He comes, He will tell us everything.” Jesus said to her: “I am He, the One who is speaking with you.”

In the first part of this dialogue, Jesus reveals Himself to the Samaritan woman as a Giver of living water (4:7-15). The dialogue opens with the request of Jesus, “give Me a drink,” and the surprise of the woman, and it takes place on two levels: on a temporal level, that of the water that the Samaritan woman comes to get in the well to meet the needs of each day; on a spiritual level, the living water of the revelation made by Jesus in the gift of His Spirit.

It is a dialogue in successive waves through which Jesus seeks to take the woman from the misunderstanding, to bring her to His level, to the desire for a water that quenches the thirst for happiness, the desire for life in fullness. In the second (4: 16-19) and third (4: 20-26) parts of the dialogue, Jesus reveals Himself as Prophet and Messiah.

When she wants to divert the dialogue from her personal life to the life of the people, the woman offers Jesus the opportunity to reveal Himself as an eschatological Messiah who begins the new time of worship in spirit and truth, not in the temple or on the mountain. To worship is to recognize the glory of God disconnected by Jesus from a fixed place or ritual; Jesus is the Temple of this worship due to God, in the gift of His Spirit and in the truth of His Gospel.

The encounter takes place at the well which is the source of the water. In our contemplation of the scene, attention goes to the central theme of water, symbol of life and the Spirit, gifts of God. A rabbinical legend says that “Jacob made the water overflow from the pit, which was 32 meters deep,” causing it to become a water spring. The well makes life possible by the water it offers, by the encounters it provides, by the desires it feeds.

In the Jewish tradition, the well is a symbol of the Law that, like water, ensures the life of Israel. In the wilderness, Israel found a well (Numbers 21: 16-18), “about which the Lord said to Moses: ‘Call the people together and I will give them water.’ Then it was that Israel sang this song: ‘Spring up, well!’” The Targum says that this well was accompanying Israel in the wilderness, going up mountains and running valleys, quenching everybody’s thirst; and that this well (which was the Law) was overflowing with water as Israel sang. St. Paul refers to this tradition when he says (1 Corinthians 10: 4) that the Israelites in the wilderness “all drank the same spiritual drink, for they drank from a spiritual rock that followed them, and the rock was the Christ.”

In the fatigue of daily life, we seek the water that can quench our thirst for happiness; we foster the desire for an encounter, for a nuptial relationship, for a love that opens the door to personal fulfillment and happiness.

The Samaritan woman, besides the labor of searching for water, was tired of looking for a husband (not one, but five) who could give her happiness. We can think of her situation as that of a woman seduced and abandoned since, in her time and culture, only husbands were entitled to divorce. We can see in it an image of our search, of our frustrations, of the thirst not satisfied and emptiness that needs to be filled.

This husband you have, the fifth, is not yours, says Jesus to the Samaritan woman. This dissatisfaction and frustration that our souls experience are not the husbands we are searching for. Only God can be a spouse and satisfy, with the water of His Spirit, our thirst for life and happiness.

Encounters along the way

Each day is a new beginning… we return to a path in search of fulfillment and personal happiness. For the Christian, life is a journey following Jesus. He writes the script and the decisive encounters…

The path of vocation is a path of liberation and discernment of one’s own personal freedom.

Vocation is openness to life, for it is only the full acceptance of the gift of vocation that makes a person capable of changing the world.