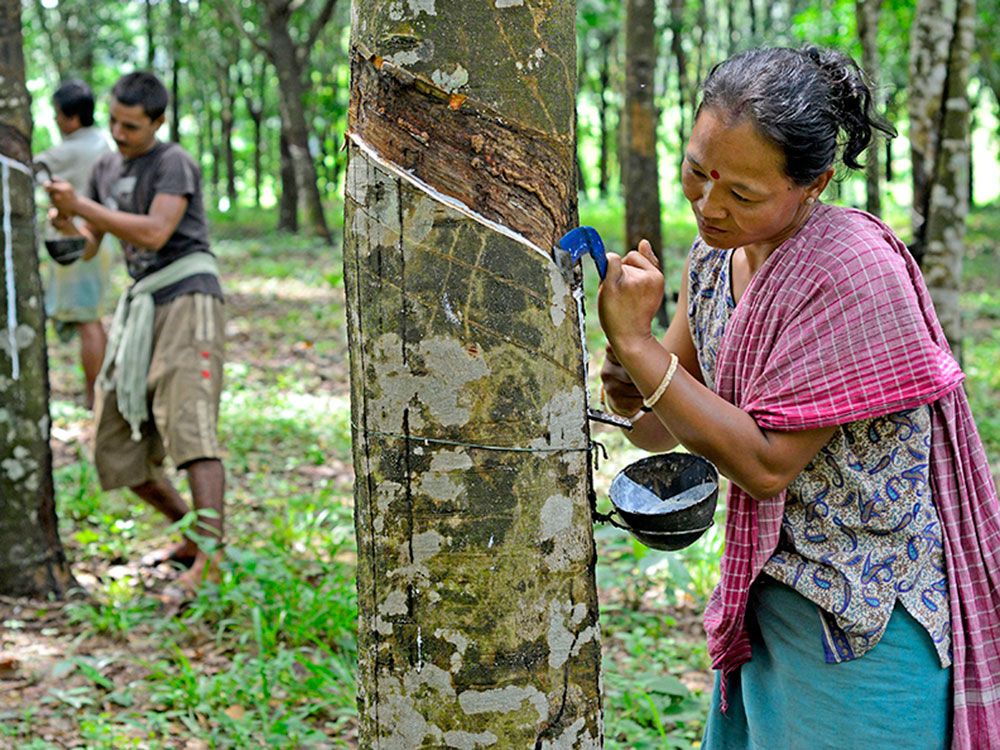 The introduction of rubber plantation, by Sister Rose, in villages across the northeast of India brought in progress to the lives of villagers. Residents not only improved their economic status but also ended their dependence on moneylenders who used to cheat them.

We would have been still poor working for others if Sister Rose had not entered our lives,” Jengsang Marak said, sitting on a designed teakwood sofa on the veranda of his concrete four-room house. When Rose Kayathinkara, a medical mission nun, first came to Chiramdare, Jengsang’s village, 32 years ago, he and more than 500 families lived in one-room bamboo huts. “We used to struggle even for one meal a day,” he told Global Sisters Report.

That was before Kayathinkara, who is popularly known as Sister Rose, introduced rubber cultivation to them. Today, concrete bungalows dot the village that sits on the slope of a mountain in the East Garo Hills district of Meghalaya state (which means “the abode of clouds”) in Sanskrit, in the northeast of India. Its residents now proudly display their bank accounts with thousands of rupees to their credit.

Like them, thousands of residents of 20 other villages, spread over 2,950 square miles in Meghalaya’s Garo Hills, now lead prosperous lives. They belong to Garo, one of the three main matriarchal tribes of Meghalaya who inhabit East, West, North and South Garo Hills, one of the wettest regions in the world. Divided into five civil districts, it is an area with poor road connections.

Jengsang, who is now 65, says Sister Rose’s efforts have helped the villagers not only improve their economic status but also end their dependence on moneylenders who fleeced them.

The flipside of such development was that Sister Rose, who is now 73, earned the wrath of businessmen and secessionists. While the businessmen charged villagers exorbitant interest rates for loans and underpaid them for their crops, the secessionists taxed them illegally, threatening their safety. The secessionists’ goal was to carry out their armed struggle for an independent Garo land.

The militants often threaten to kill Sister Rose. Five years ago, they tried to kidnap her companion, Sr. Cecilia Nedungat, mistaking her for Sister Rose. The nun escaped because the militants could not get their vehicle inside the convent gate. Sister Rose has refused the militants’ demands for money and told them categorically that her funds are for the people’s development. They responded, “Yes, we know. That is the reason we are asking you for a small amount.” However, the nun has stood her ground.

“Now, I am used to threatening messages,” she says, showing texts on her mobile phone. One read, “Count your breath; tomorrow I’ll kill you at 10 a.m.” Another said: “You will be dead soon. You are no sister. You are evil. I will kill you.”

When the threats became too sinister, the state government provided her police protection. Officers accompanied her wherever she would go. “We tease Sister Rose, saying that she is the only church person in this part of the world with police protection,” says Bishop Andrew Marak of Tura Diocese which covers the region.

The Prelate, a Garo, says the threats have only made Sister Rose stronger. “She is fearless. Her heart and soul are for the people,” he said. The Bishop says he has seen “drastic changes in our people” after Sister Rose pushed them to take their lives more seriously. The nun accomplished all this through her rubber revolution.

Jengsang still recalls Sister Rose’s first visit to his village to introduce rubber cultivation. “She spoke to us about this new cash crop and its advantages. We did not believe her words initially,” he says. So the nun came back with officers of the Rubber Board in Kerala, her native state in southwestern India where people have made rubber cultivation a lucrative business for more than a century.

“After she left us, we met with our village chief and decided to give it a try,” recalls Jengsang who was the first to plant rubber saplings in his village. His room window now opens to rows of tall rubber trees, as old as 29 years, planted on slopes with cups tied to them to collect latex. His sister, Palmaris B. Marak, said her husband was skeptical and traveled to Kerala, more than 2,000 miles southwest of their village, to get a “first-hand experience of a rubber plantation.”

Sister Rose also took a group of villagers to Kerala at her own expense because she was desperate to end the poverty among the Garo people. She came to the region in 1972, equipped with a degree in social work. She was first posted at Rajabala in West Garo Hills and lived in a one-room hut perched on a tree. “I found them too poor and tried helping them through animal farming and vegetable cultivation,” she said. “They were spendthrifts and would not save for the future. I had to find another method to improve their income.”

After 12 years, she was transferred to Mendipathar in North Garo Hills, 93 miles east, where she joined Nedungat who had been visiting local families for several years. “We stayed with the villagers in their houses, sharing what they would give. We had to wait until evening for them to return from the field, to talk and eat with them,” Nedungat says.

To instill in them new financial habits, Sister Rose started the Mendipathar Multipurpose Cooperative Society in 1990. The society runs stores that sell daily provisions at a minimum price. It also collects rubber and other farm products from the villagers and sells them in the open market, infuriating the market middlemen. “However, people appreciate her works and protect her,” the Bishop says.

The state government too has recognized Sister Rose’s efforts with several awards. Last year, on International Women’s Day, she received the district award for best woman entrepreneur. In 2015, she was named Best Social Worker in the Northeast. In 2012, she received a state award for meritorious work on behalf of villagers, and she has won numerous other awards for her social work over the years.

Church people in the region applaud Sister Rose for fostering faith among the people. “What Sister Rose has done is a different kind of evangelization. People need not only catechism but also food. She has filled her lamp with the oil of good deeds that has raised the economy of the Garo Hills,” Bishop Marak observed.

Fr. Salnesh D’Sangma of St. Mary’s Church, Chidimit village, also appreciates Sister Rose’s work among his people. “Sister Rose has contributed to the 60 percent economic growth of this area,” the priest said. His people, he says, were “very poor” until the nun started working among them. “Sister Rose has helped them become rich. They now own cars and jeeps and educate their children.”

What has impressed the priest the most is that the Garos have become strong in their Catholic faith as they prospered in life. “Earlier, their faith was shallow. Now, they attend all church services. They love priests and sisters. They contribute generously to the church,” he says. www.globalsistersreport.org