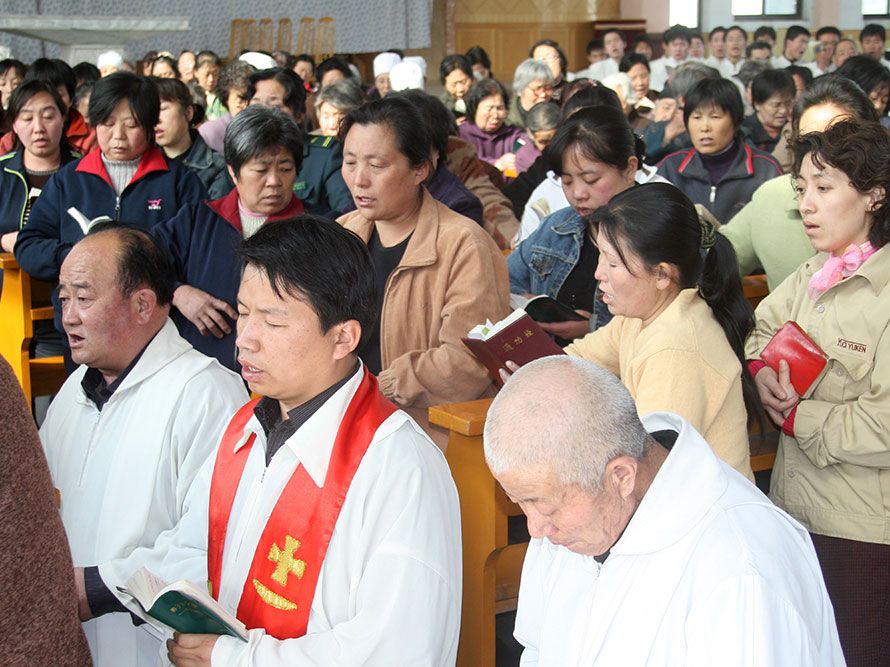 The Martyrdom of Catholics in China

After the communist party assumed power in China (October 1, 1949), the authorities unleashed a season of persecution and suffering against Catholics, both foreign missionaries and local clergy, religious and faithful. It was the time of the most violent persecution.

Under the Mao regime (1949 – 1976) many Catholics were imprisoned for thirty or more years. Many of their memoirs have been kept secret for a long time, not only in China, but also outside.

Today, it would not be acceptable to continue in the path of silence, or in minimizing the extension of the persecution suffered by many Catholic faithful. Christians all around the world have the right to know about the witness offered by many confessors and martyrs of the Church in China.

While the persecution suffered by Catholics during the 1950s is relatively, although, as mentioned reluctantly, well documented, there is not much documentation that describes the sufferings by Chinese Catholics during the ten years of the so-called “Great Cultural and Proletarian Revolution” (1966-1976).

I hope the young Chinese priests and faithful would gather from the lips of the elderly the stories of suffering and martyrdom that have not yet been recorded. That would be an enormously precious contribution to the edification of the Chinese and universal Church.

Cultural Revolution
Some information is already available. Many of those who visited China in the eighties and nineties have heard of accounts on how the Red Guards stepped up their attacks against the Christians who were considered enemies of the people. Churches were stripped of everything, even damaged or destroyed. Many of these were turned into storerooms, factories or homes. Statues, vestments, religious articles and books were destroyed by the attackers.

The Catholic faithful were accused of counterrevolutionary actions, as many had obvious contacts with people abroad. Many of them were taken out from their homes and forced to parade along the streets of their hometowns. They had to wear tall cylindrical hats with their crimes spelled out.

After the public humiliation, which included horrifying verbal and physical abuses, a number of faithful were sent to lodge in miserable dwellings, while the persecutors depilated and destroyed their houses. Catholic leadership, bishops, priests, religious men and women were arrested, trailed in insulting manner, found guilty and forced to labor camps or prison, where many suffered miserable deaths. For example, Bishop Xi Minyuan died in June 1966 as a consequence of severe mistreatment in prison.

Stories Of Martyrdom
Those who are acquainted with China Catholics, including priests and sisters, heard from them various narratives of persecution and martyrdom in the family or village. I myself happened to hear several of these stories.

A number of these are reported by Fr. Sergio Ticozzi in an article in the Hong Kong periodical Tripod (2016, no. 182). In Baoding (Hebei), Red Guards sacked the cathedral and burned religious items; then brutally rounded up the clergy and nuns around the pyre. Even if Fr. Antonio Li Daoning protested their love for the country, he was beaten until he fainted, and was then thrown into the pyre.

Sister Zhang Ergu suffered the same tragic fate on the same day. As she refused to trample on an image of the Virgin Mary, she was beaten to death and thrown into the fire. Another sister, Wang Qian, was burned alive by the Red Guards in Kaifeng. A priest died as a consequence of major burning injuries in a northern Henan church.

Scholar Anthony Clark narrates that a conversation with a pious gardener taking special care of a specific spot at the ground surrounding the church in the north of Beijing, revealed a tragedy that happened in the summer of 1966. The Red Guards beat an elderly priest to death and buried him on the spot, after he refused to abandon his faith.

In Taiyuan, Fr. Wang Shiwei, thrown into a prison, was chained in a way that he could not even lie down. After this torture, on February 15, 1970, he was taken out and shot.

Another tragic episode from the Cultural Revolution happened on August 24, 1966. The Red Guards attacked and cruelly beat about 70 Chinese nuns and the last seven foreign nuns belonging to the Franciscan Missionary Sisters. They were allowed, until that day, of running the Catholic School of the Sacred Heart for the children of the diplomatic corps in Beijing. The next day they underwent the ‘people’s trial’ and the foreign nuns were expelled. The trip from Beijing to Hong Kong was exhausting, and Sr. Molly O’Sullivan died the day after she reached free Hong Kong. The seventy Chinese sisters were sentenced to 20 years of incarceration. Little is known about what happened to them while in prison.

For the Catholic leaders already in prison or forced labor camps during the 1950s, the Cultural Revolution proved to be an even more dreadful nightmare. The interrogations, attacks in public trials, insults, beatings and violence escalated exponentially.

Repression Continues
Most tragedies and sacrifices suffered by Chinese Catholics, especially those that occurred during the Cultural Revolution, remain untold. Many victims and their acquaintances do not dare speak out of fear. For more Catholics, the time of suffering and persecution is not yet over. The harassment and oppression is perhaps more subtle, but it might be even more effective than in past generations.

Catholic leaders have to suffer from undue interference and abuses by corrupt local authorities. In fact, many worries trouble the Catholics today, whether they belong to the so-called underground (or maybe better ‘non-registered’) communities or those belonging to the open churches.

I have witnessed that both want to be loyal to their faith, to the Catholic Church and to the Pope. Yet they suffer from astute pressure by the regime’s officials and people who collaborate with them. The authorities try every means to control and manipulate the open communities, either through enticements or through harassment and oppression. In the meantime, political authorities aim at the elimination of the unofficial communities forcing the registration of its members in the Patriotic Association.

Officials involved in this sad effort do not spare repression or even violence. The most recent episodes are the ‘mysterious’ death of Fr. Pedro Yu Heping, the captivity of Bishop James Su Zhimin, the destruction of crosses and churches in Zhejiang, and elsewhere in China.

The Case of Fr. Pedro Yu
Most tragic is the case of Fr. Pedro Yu, an energetic 41-year-old priest from the underground community. He was found dead in the shallow waters of Ren River, near Taiyuan City (Shanxi) on November 8, 2015. According to ecclesial sources, who closely followed the case, he was a victim of rough interrogation. The police authorities hastily and conveniently decided to classify the case as a suicide. No one in China Church, and among those close to Fr Pedro, buy this verdict. He was a serene and strong person, never depressed, and totally devoted to his demanding ministry. A few days before his death, he had called friends and collaborators in Hong Kong and other countries to organize new training courses for young people and religious personnel in China.

Fr. Yu used to take young Catholics to remote and poor areas of the country, where he delivered talks on social and pastoral issues. On the day of his death, he was about to travel to a distant province for a catechetical seminar. He was active in promoting Catholic thought in China, publishing a theological journal and collaborating with cultural institutions in China, Hong Kong and other countries.

Officials in charge of implementing religious policy in China monitored Fr Pedro’s activism, especially his influence among the youth and his ability in using the internet for reaching out to young people. In some occasions, the authorities closed the website where he published translation of papal speeches and writings. He was linguistically talented, and his Spanish name ‘Pedro’ is reminiscent of the years he spent studying in Colombia and Spain. In Europe, he learned and appreciated the “Camino de Santiago” and introduced it to China.

Many Catholic faithful, both in China and Hong Kong (where he is fondly remembered) consider him a martyr. If this is the case, he would be the first priest to suffer a violent death in China after many years. To me, this case reminds me of another violent death suffered by a priest in the hands of communist agents: the polish priest Jerzy Popieluszko, today venerated as blessed, killed in 1984, during the repressive years against the popular movement of Solidarnosc and under the pontificate of John Paul II.

In a country ravaged by war, forgiveness is the contribution Christians can offer to a society divided along ethnic lines and rivalries. A missionary in South Sudan shares a couple of stories on how…

The Art of Choosing Well

One of the themes of the Synod on the Youth is vocational discernment. What is it, what are the prerequisites and its most basic steps? Experienced retreat director, author and professor at the Ateneo…

We often think of holiness as something that is only available to some who, by their vocation, are “predestined” to a path of holiness. On the contrary, holiness is a free gift to all. In this way, it…