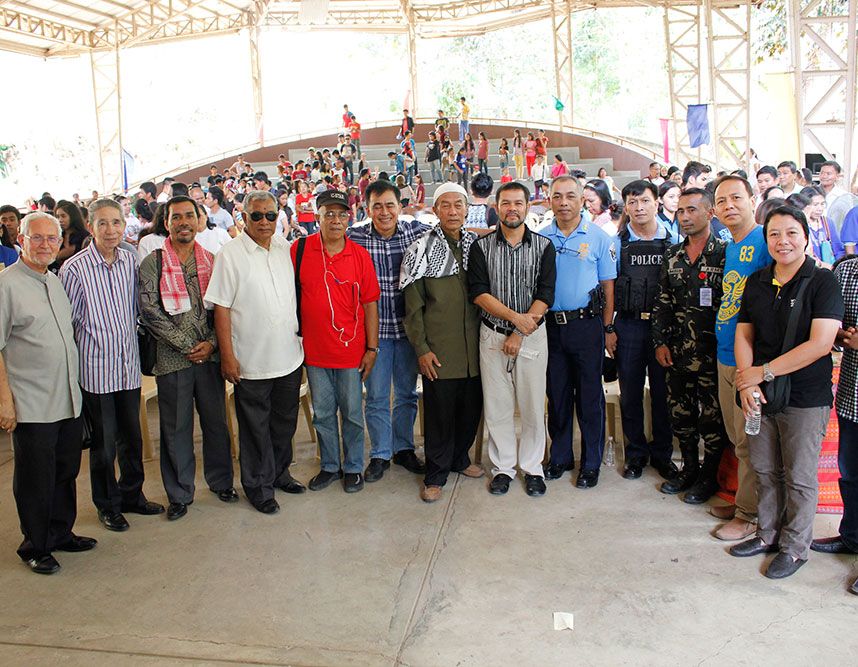 Zamboanga, a city of one million inhabitants with a substantial Muslim population, is home to the Silsilah Dialogue Movement founded by Fr. Sebastiano D’Ambra with the aim of promoting peace and dialogue between Christians, Muslims and faithful of other religions.

In some ways relations have worsened because here, as in the rest of the world, radical Muslim movements, even violent ones from abroad, have begun to spread for some years now. In 2017, the island was wounded by terrible violence perpetrated by a group of extremists affiliated with the so-called Islamic State that wanted to constitute a caliphate and put the city of Marawi to fire and sword sowing death and destruction.

The government intervened very harshly and after five months won the day. But the signs of devastation, both on people and buildings, are still clearly visible. Relations between Christians and Muslims are either conflicting or peaceful, depending on the case. In the Islamic community, there are many moderate faithful, who want to live in peace with Christians and are tired of the violence, but there are also extremists with whom it is difficult to live with.

Later, I returned to the Philippines, to Zamboanga, and in 1984 I decided to give life to the Silsilah Movement, a term that means “chain”, “bond”, but also “family tree”. It means that humanity forms a chain, that we are all creatures of God linked to each other. I wanted to give life to this movement because I believe in the spirituality of life-in-dialogue, dialogue with God, with oneself, with others, with creation. I believe interreligious dialogue is the way to peace.

The Silsilah Movement pays particular attention to formation: what are the main initiatives promoted in this area?
Dialogue cannot be improvised, for this reason we take great care of formation. We organize various courses in which Christians and Muslims not only from Mindanao, but also from other parts of the Philippines and abroad, participate. In addition to seminars and workshops, every year we hold a monthly course that allows us to deepen our mutual knowledge, the spirituality of dialogue and the understanding of history, the sacred texts, the fundamental principles of Christianity and Islam.

How many people are part of the Movement today?
The Movement counts on a small leading group, which includes Christian and Muslim people (among them also some imams), and a few thousand Christian and Muslim members present not only in Mindanao but also in the whole of the Philippines. They are former students and friends who have made the spirituality of dialogue their own and have committed themselves to living it and spreading it through various initiatives. I would like to stress that among the Christian and Muslim members solid friendships have been established, peaceful coexistence is possible and is also fruitful.

In which social works are Christians and Muslims members of the Movement involved?
In the poorest areas of Mindanao, for example, we follow together some kindergartens and we also assist people in need with the distribution of food. We also promote the care and protection of the environment and to this end we organize courses in biodynamic agriculture for the poorest farmers in our Harmony Village, a community at the outskirts of Zamboanga built on land that was donated to us. Among the many assistance projects we have promoted, one is aimed at 50 Christian and Muslim children who were orphaned a few years ago as a result of hard clashes between Christians and Muslims in an area of the city. We are supporting them in their studies and growth.

The school plays a fundamental role in building a peaceful and cohesive society.

We collaborate with numerous schools and universities by organizing meetings and seminars. We have also written a dialogue training manual that teachers can use to teach peace. In 2010, our Movement promoted the World Interfaith Harmony Week, dedicated to the love of God, neighbor and the common good, here in the Philippines.

I was recently appointed secretary of the Commission for Interreligious Dialogue of the Philippine Episcopal Conference which, every year, chooses a theme to deepen. The theme of the year 2020 will be interreligious dialogue and we are preparing initiatives that will also involve young people.

In addition to all the initiatives I have mentioned, there is a daily initiative that I consider essential: prayer. There are also groups praying for peace. Prayer is a powerful weapon, the only one necessary.

Is there a project that is particularly close to your heart and that you would like to carry out soon?
I would like to open a school of theology for Catholics, a school that can ensure a solid religious formation and, at the same time, educate for dialogue. As I said earlier, I think it is necessary for Catholics to strengthen their faith. Too many live a “watered down” Christianity without having experienced a real encounter with Christ.  Published in Vatican Insider

A Call to Witness

Being a call center agent may be a well-paying job. Yet, it can also be a means to helping the less fortunate and seeking answers to the meaning of life. Leomar Maranan describes how to find balance…