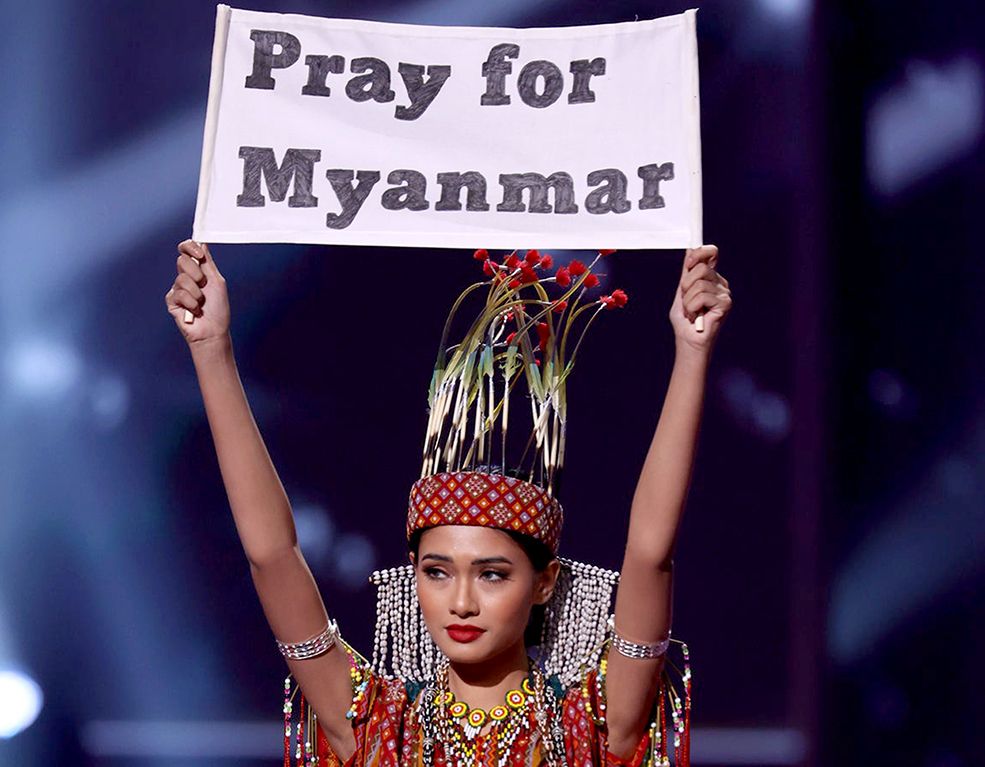 The situation in Myanmar is deteriorating day by day. The Burmese Sisters of Reparation, present in the country serving the local populations in the most remote villages, witness the daily suffering and give voice to the tragedy of their people.

This is the testimony of Sister Beatrice, one of the more than 380 Burmese Sisters of Reparation who, inside and outside their country, share with the families and people of Myanmar the drama of a civil conflict triggered by the coup of February 1, 2021. “Our beloved homeland is suffering terribly for its children who kill each other,” says the nun.

Since October 1895, the Sisters of Reparation have been present in the most remote villages of Myanmar where they serve the local populations, particularly women. Currently, the religious women are present in 13 of the 16 Burmese dioceses with 62 convents. However, some have been closed in recent months to escape persecution and reprisals.

Consequently, some of the many activities that the nuns carry out have been suspended: pastoral care to schools in the villages, homes for the elderly, health centers, reception of orphans, service in prisons, assistance to refugees and displaced persons who have now increased exponentially.

Convents Open Doors
This emergency situation has opened the doors of many convents to welcome people leaving their homes, especially the elderly and the sick, who are unable to flee into the forest. Unfortunately, the civil war was not enough to devastate this wounded country. It was compounded by the Covid-19 pandemic which is claiming many victims because people cannot be cured. By caring for the sick, some of the religious contracted the virus and one of them died.

In short, these are dramas that touch these nuns closely because they experience the tragedy of the peoples of Myanmar themselves. Their relatives abroad cry for their loved ones for not being able to assist in any way and for having great difficulty in maintaining contact.

Courageous Minority
These nuns are courageous and are part of a small minority of about 650,000 Catholics out of a population of 57 million inhabitants. They are courageous in staying and also in making their voices heard, letting flashes of news, stories and dramas filter out of the country that would otherwise remain buried under a blanket of silence that is now almost impenetrable. In fact, Myanmar has almost totally disappeared from the media’s radar. But the situation on the spot is anything but pacified.

In mid-September last year, AsiaNews agency reported that around 30,000 people were forced to flee the central Magwe region due to clashes between the army and people’s defense forces. At the same time, thousands of civilians had to flee their homes, often set on fire, in the Chin state and took refuge across the border of neighboring India. But these are just two of the many conflict situations that have exploded almost everywhere in the country, especially in the regions inhabited by ethnic minorities.

In particular, since shadow government last year, made up of opponents in exile, called on the population to rebel against the military junta, there has been a resurgence of clashes across the country. But attempts by militias to attack the military have often led to retaliation against civilians. More than a thousand have been killed since February 2021, and 250,000 displaced people living in desperate humanitarian conditions.

The military have accepted a ceasefire to ensure the distribution of aid, but they are not respecting the commitment. “A serious and unspeakable gesture, confirms a nun, is what the regime does with regard to the provisions that come from humanitarian aid. These are blocked, seized and burned, instead of being distributed to starving people. Unfortunately there are other increasingly cruel facts against the defenseless population.”

Living Under The Trees
This is what Sister Noemi’s family is experiencing and in particular her sister who ran away to the forest with her six children: “We have been living under the trees for more than a month and the food is almost finished,” the sister told her after a long and worrying silence. “We often hear the bombings, and one night we heard them right near us. We were afraid of getting caught, so I told my husband and kids to run away because otherwise we would all be dead. We went as far as possible, but it was difficult to find water, until we saw a small stream full of critters and rotten leaves and, to survive, we stopped there, hiding among the rocks. I am so afraid, but I pretend to be strong for the love of my children.”

“My sister,” says Sister Noemi, “in turn asked me in tears if we will still be able to see each other again. After a long silence, I tried to cheer her up, saying that everything is possible to the Lord and I promised to pray even more so that the Lord would help us in this long painful way.”

These daily stories recounted by the Sisters of Reparation give a lucidly painful picture of the crisis that has once again plunged Myanmar into a spiral of violence and divisions that are difficult to heal.

Also because, in addition to the media, even the international community-and Europe in the first place-do not seem interested in intervening to help pacify the country, unlike China which in peace as in war has many interests in Myanmar and aims to consolidate them further.

Christians Are Victims
In all this, Christians are often victims twice: both because they profess another religion than the predominant Buddhism; but above all because they mainly belong to ethnic minorities and are therefore considered to be in some way conniving with the rebels.

In fact, Christians of all denominations represent only six percent of the population but among tribal peoples they also reach 30 percent. In short, they are twice “different” and because of this they are doubly targeted.

In addition to the arrest and mistreatment of priests, pastors and religious, many Christians are also killed and kidnapped by the military and churches and places of worship desecrated, destroyed. “Before this horrible war,” says Sister Eugenia, “my parents used to participate in the Eucharistic celebration every morning and were already thinking, together with the priest, about preparations for their 50th wedding anniversary, but they had to flee due to the sudden arrival of the military.

“They fled from one place to another, always looking for new areas to protect themselves from bombing, even hiding the children under the branches. They brought with them a few things and also some statuettes of Our Lady and, despite the privations, they never stopped praying.  At one point they were too tired to go on and decided to stop. In that place, they arranged the statuettes as best as they could in a niche made in the trunk of a tree and there they gathered in prayer.”

Hope In The Darkness
The priest too had lost all traces of them and the other people of the village. When he managed to get some news, he immediately set out in the thick of the jungle looking for them. “He was able to reach my parents on their anniversary,” relates the nun. “As soon as they saw the priest, they burst into tears of joy at the thought of being able to receive his blessings. Immediately after, they told me that they felt a sense of profound peace and serenity in their hearts. The Lord sees and provides, my father told me, because the priest, in addition to giving his  blessing, also brought rice just on the day when our supplies were about to run out.”

Feeling that I could not hold back the tears, he added: “Do not cry my daughter because of our  many difficulties, for the Lord is always close to us; despite our sufferings, for us the most important things are faith and prayer.”

“Christians, like other people of good will,” confirms Sister Beatrice, “give hope to people by welcoming them, staying close to them, healing their wounds and consoling them, just like the mustard seed that has become a tree that gives refreshment around itself.

“At certain moments, however, a question torments us: where are you God? Is it all silence? Is God not listening any longer to our cries?” We are sure that He sees our suffering and our misery. God precedes us with the tenuous light of His Word which lights up hope in the darkness of this terrible night, precedes us, and guarantees us His tenderness.”  Published in Mondo e Missione

Macau has felt at home in a fusion of Eastern and Western traditions since the Portuguese first settled in Macau in 1557. Now, in 2020, Macau invites all Christians and non-Christians alike to join in…

Just over a century after he died as a martyr, Blessed Charles de Foucauld (1858-1916), who brought the Gospel to Islamic lands and lived among the Tuareg people in the Algerian desert, will be…