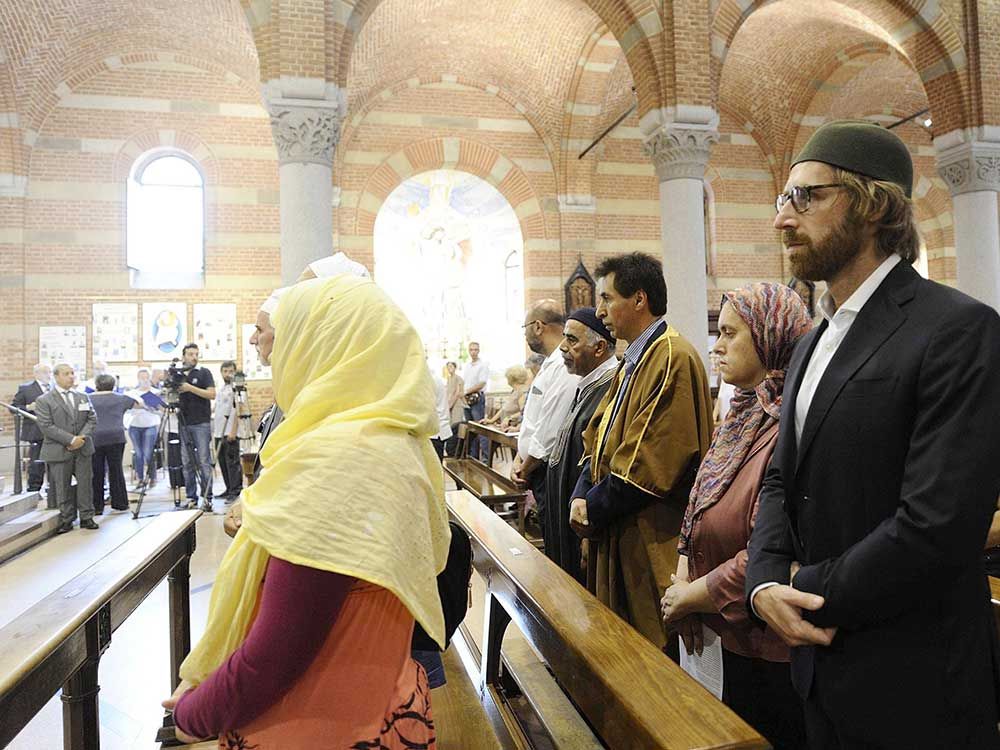 Christians and Muslims in prayer

Paolo Nicelli, PIME Missionary, professor and an expert on Islam

Last July, Muslims attended Sunday Mass across France to show solidarity in denouncing the killing of an elderly priest in a church by two terrorists. The interfaith celebration signaled the need for sharing and prayer between believers of both religions as a way to defeat fundamentalism and violence.

Most of the terrorist attacks on European soil, claimed by either the so-called Islamic State or Al-Qaeda, have highlighted the fragility of the West to provide a homogeneous answer to the problem of international terrorism. They have also underscored the short-sightedness of political institutions in refusing to accept the fact that Islamic terrorism cannot be separated from the broader and more articulated problem of uncontrolled migration from northern Africa, the Arabian Peninsula, the Balkan countries and from Asian countries such as Pakistan, Afghanistan and Bangladesh, notoriously famous for emigration to the West.

These same political institutions are also incapable or, perhaps, unwilling to admit the failure of their military strategy to contain the Taliban and jihadi (“holy war”), as in the case of Afghanistan. Instead, in the case of Bangladesh, authorities struggle to accept the failure of their permissive policy towards the construction of numerous Koranic schools from countries such as Saudi Arabia, led by imams trained in the school of Wahhabism (puritanical Muslim sect) and international Islamic jihadi.

These different situations, with different problems, share a common jihadi purpose: the destabilization of weak Western, African and Asian democracies through violence and destruction. Added to this is the great embarrassment of the governments of those countries involved in the attacks, which have to and will have to deal with international terrorism capable of stirring up hatred and resentment among the most marginalized young people in their populations.

Wrong reading of the Koran

We have learned from the media and expert analysis that the matrix of jihadi is found in an ideological and violent reading of the Koran, the Islamic tradition (sunna), especially of the Prophet’s sayings (hadith), as well as the Islamic law itself (sharia). This reading praises the justice of God, the revenge that He rails against deniers of the true faith, and the idolaters, who must be killed in order to affirm the true faith of Islam.

These are delusional speeches uttered by people who are unbelievers, as well as being psychiatrically unstable. But they should not be underestimated because they are capable of evil intelligence that wants to promote death. In fact, they empty religion of its formal content: God’s love for man and for all creation. They reduce God to a justification of their brutality and horror. This is the nihilism of jihadi, which in the case of the self-styled Islamic State, wants to erect a religious, political and military institution in the form of a true totalitarian caliphate, able to manipulate the conscience and mind of the people, to the point of gaining consent and support.

Now here is the uncomfortable question for all Muslims, as for all men and women of goodwill: can we consider jihadis believers of Islam? Are they representatives of all those Muslims who, in good faith, practice their religion, abhorring violence? Before, we called them “unbelievers” because a believer cannot reduce God to be the cause of His justice-violence, whether it be gratuitous or mass. But they have made a profession of Islamic faith, believe in the precepts of Islam and read the Koran and the sunna every day. Therefore, we must consider them Muslims.

In their own way they are belivers; but they are also sinners. That is, they are against the ethics and the Islamic religion because they betray Islam. They say they are Muslims but they go against the fundamentals of their religion. In fact, in Islam, it is forbidden to kill, especially children, religious; as it is forbidden to destroy places of worship. Yet, these “believers” do so systematically, planning to gain heaven through massacre and what they call “martyrdom.”

And yet, the questions we should be asking ourselves should be: what reading or interpretation of Islamic sources are they being fed with? What is the violent matrix that gives rise to their ideology? It is Wahhabism, in short, the puritanical and reformist current of Islam which, for more than two centuries, has inspired first, pan-Islamic movements, then Arab nationalists with their dictators, then the jihadi of Al-Qaeda and Islamic State, in their ideological and institutional distinctions.

This ideology wants to drag Islam centuries back to its beginnings and wants to adopt the model of the purity of the pious ancestors founded on a puritanical and violent jihadi ideology. They have mythologized that historical period of the origins of Islam to the point of making a totally ahistorical abstract, colored by their delirious interpretation.

This is where the jihadis pose themselves in direct opposition to Islamic ethics, accomplishing their religious and intellectual sin: they reinterpret Islam through their ahistorical categories without an interpretation of sources and without applying a critical historical criteria to the Koranic text and the sunna, to bring out the content of the Koranic precept, namely, to promote the good and avoid evil.

Jihadis read everything in literal terms, reduced to legal precepts, emptying it of its spiritual and analogical capacity, thus reducing the jihad (fight against sin and every structure of sin) to one form only, that of “holy war,” that is, to bestow “justice-violence” against those who do not accept their version of Islam, accused of being the corrupters of religion.

And that’s why it is important that Christians, Muslims and men and women of goodwill come together to pray to discourage violence that is inherent in religions where God is used to perpetuate violence, death, and nihilism. It is important to pray, so that it discourages the violence that is in us, so that our heart gives way to God’s mercy, to His love for men and women. This is the task for all representatives of religions and, especially, Muslims today: read their own religious sources through a spiritual and not literal nor legalistic hermeneutics – rather, a theological one. The Muslims in the West, as in the East, must recover the spiritual and moral reading of the Koran and the sunna, so it may open them to consider the other not as a threat but as an opportunity for encounter and human and spiritual growth. www.asianews.it

The Ati tribe’s 2.1 hectare property is by far the smallest ancestral domain in the Philippines. Other domains cover thousands of hectares of land that are sold or used for purposes of making the…