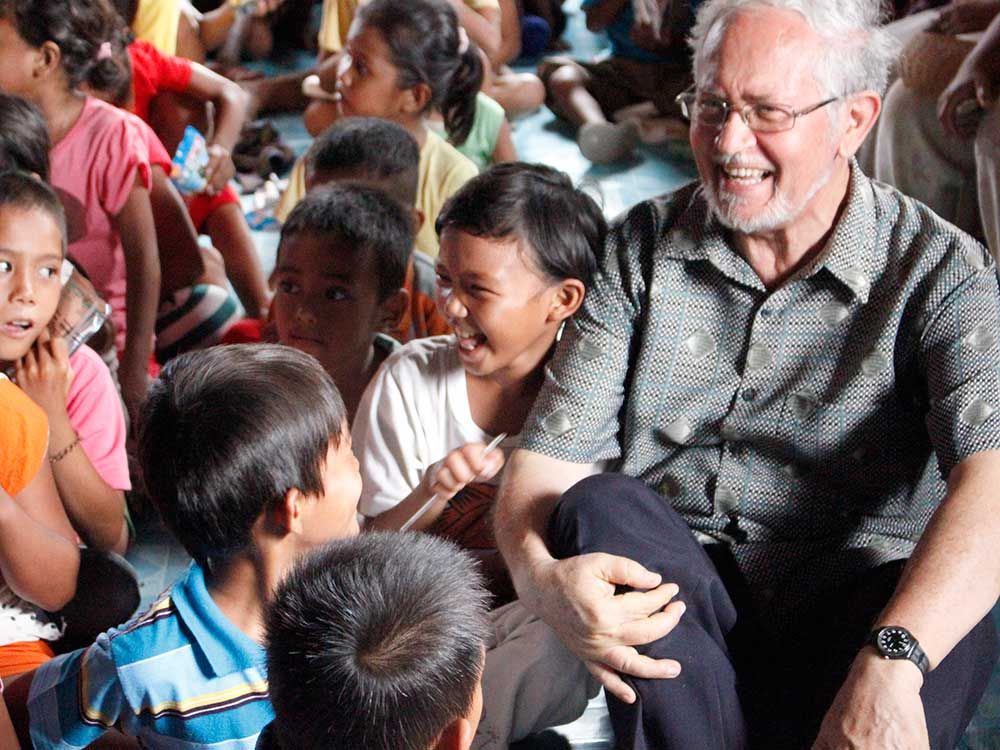 Home to Christians and Muslims, the southern island of Mindanao in the Philippines has been beset by religious conflicts. Hand-in-hand, people of both faiths continue to strive to work for peace, despite glaring differences, like links in a diverse chain.

I am a missionary in the beautiful city of Zamboanga, in the southern region of Mindanao. Through the Silsilah Dialogue Movement, a mission of interreligious dialogue and peace formed by Christians and Muslims, I have developed friendship with numerous believers, especially Muslims. I believe that it is still possible to build friendship with our Muslim brothers and, together, build a harmonious society starting from a spirituality that unites human beings as part of the same family created by God.

When I started the Silsilah Dialogue Movement with other Christian and Muslim friends in Zamboanga back in 1984, our dream was to become “bridges” and promote a spiritual “chain” and “link” (the actual meaning of Silsilah) amongst peoples of different faiths. This vision has been expressed in many ways: living with the poor, forming students and leaders, building bridges of solidarity and working for the protection of creation. Dialogue, for us, rests on four pillars: dialogue with God, with the self, with others, and with creation. In spite of all our efforts, religious conflicts linger in Mindanao. Yet, we continue committed to a peaceful co-existence and being a sign of hope in the midst of strife between Christians and Muslims.

The siege of Zamboanga in 2013 by some leaders of the Moro National Liberation Front (MNLF) triggered a real war inside the town, destroying and burning ten thousand houses, displacing more than one hundred thousand people, and killing hundreds of people among civilians, soldiers and rebels.

Slowly, the houses are being rebuilt but the wounds of division and prejudice remain, reinforced by the siege. This situation coincides with an increasing radical “ideology” that often emerges from a wrong understanding of Islam. Because of this, Christian-Muslim relations are more and more difficult today not only in Zamboanga but also in many other areas of Mindanao.

In the context of Zamboanga City, violence is claimed by those who identify themselves as Muslims. When I question my Muslim friends on their religious leaders’ reaction to this embarrassment, they often answer: “Father, they are also afraid!” “But afraid of what and of whom?” I query again. As our conversation goes on, the expression jihad or “holy war” emerges as justification for conflict and part of the Muslims’ religious obligations.

Nowadays, I observe, what I call, a “holy fear” creeping in some Muslim leaders who are afraid to speak out and act. They know who is behind the acts of “radical violence”; however, they opt to remain silent. At the grassroots, people live in “holy ignorance.” They rely on their leaders who often do not disclose all they know out of fear or vested interest.

Since my arrival in Mindanao in 1977, I have related with several good and sincere Muslim friends who share the common aspiration of bringing about harmony among Muslims and Christians. However, violence, prejudice, and harassment continue to be part of the daily life of people in this region. Nevertheless, we cannot tolerate this situation anymore, especially violence with religious nuances. Paradoxically, the Islamic faith holds a rich spirituality of peace and an experience of mercy that permeate the whole holy Qur’an.

During the siege of Zamboanga in 2013, rumors spread rapidly that Muslims and Christians were about to wage a war against each other with the intention of creating animosity and conflict between the two communities of believers.

The Interfaith Council of Leaders of the Silsilah Dialogue Movement gathered to prepare a statement and later went on television announcing that the siege was not a religious war, as some stated to add more ‘fire’ to the conflict. We organized a great prayer meeting in a relocation area occupied by thousands of people who had been forced to leave their places while the siege was going on.

After the siege, a Muslim friend, who was commander of the MNLF, told me that he saw me on television saying that the siege in Zamboanga was not a religious-motivated war and, therefore, there should not be any hostilities between Christians and Muslims. “Because of this sincere appeal, I cancelled the rebel offensive in the city,” said my commander-friend. God touches the hearts of people and transforms situations of war into opportunities of friendship and peace. Real friendship is one of the key elements of dialogue and peace.

Often, I am saddened at knowing what Christians and Muslims think about each other. I hear stories like these: “Father, I am a teacher in Basilan and some of my Muslim students sometimes say to me: ‘We can kill the Christians.’ When I ask who told them this, they answer: ‘Our fathers.’”

Recently, a friend from Jolo told me: “Father, there is a plan to kill or kidnap twenty Christians in Jolo. Maybe it is part of the initiation of a certain group,” she continued, and gave me the identity of the group and the possible leaders behind it.

Another good Muslim friend told me: “Father, now the Department of Education tries to put Muslim teachers in Muslim areas, especially islands. The reason is not only because they know better the local language but because they are safer than the Christians in these areas.”

The list of cases and stories could continue. For me, it only reveals the existence of a certain ideology, strategy and plan that clearly is not in line with the good intentions of Christian- Muslim dialogue. The problem cannot be solved by adding thousands of soldiers or checkpoints in the streets but by changing the attitude and way of thinking of people. Religious leaders can help only if they overcome their fears and vested interests.

We organize various activities geared towards the promotion of dialogue and peace in Zamboanga, as well as in other parts of Mindanao, and in Metro Manila. In these areas, the Silsilah Dialogue Movement has started up the so-called Silsilah Forum Groups intended to build friendship and mutual trust between Christians and Muslims.

Since its inception, the Silsilah Movement has been involved in the development of a culture of dialogue that leads to peace, harmony and co-existence among peoples of different faiths. In the year 2000, we launched a parallel ‘war’ to ex-President Estrada’s ‘all-out war in Mindanao.’ Ours was called “Harmony Chain Initiative,” under the slogan ‘From Mindanao to the World.’ Basically, it was an invitation to pray and meditate for peace, according to each other’s religious tradition, using different approaches. A universal prayer was proposed – “Harmony Prayer” – and it has been endorsed along the years by the bishops, the government and many other groups and institutions around the world. Currently, the initiative is taking place in about thirty countries.

“Courage and Mercy” is not a mere slogan but rather inspirational topics that help us to be united as Muslims and Christians, sharing solidarity, especially at a time when some people spread rumors and incite divisions through prejudices. Christians are called to be humble and reflect about the increasing materialism that is destroying the real spirit of Christianity that affects a constructive dialogue with other believers. And Muslims should show more the ‘peaceful and merciful face’ of Islam, rejecting all forms of extremisms in the name of religion and God.

Justice and mercy in a balance

While some biblical texts and the traditional teaching of the Church endorse capital punishment as a deterrent and safeguard of the common good, contemporary Church pronouncements emphasize the…