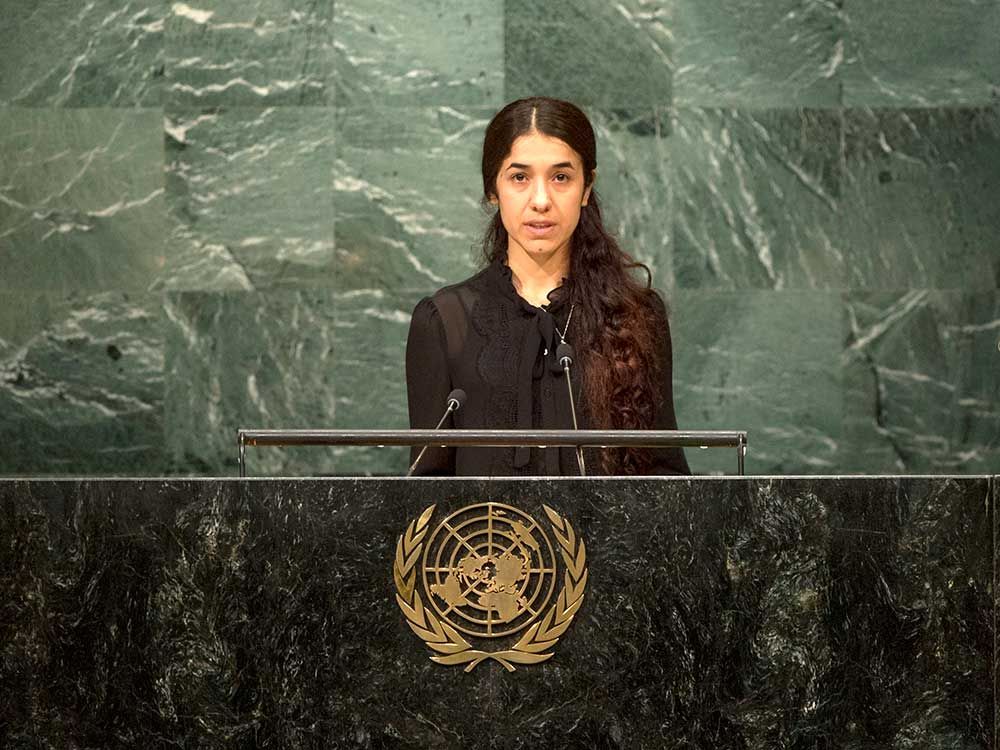 Yazidi Nadia Murad (in photo) – who survived being kidnapped and forced into sexual slavery by IS (Islamic State) – was honored by the U.N. for her work to help human trafficking survivors.

Murad was appointed Goodwill Ambassador for the Dignity of Survivors of Human Trafficking. She is the first survivor of human trafficking to hold the position. In early August 2014, Murad’s hometown of Kocho in Northern Iraq was attacked by IS. Murad, who belongs to the Yazidi minority religion, described IS’s impact as “a nightmare that has struck our society.”

IS executed men and older women from the village in the attack, including Murad’s mother and six of her brothers. Murad and other women and children were captured as “war-booty” and trade merchandise.

IS’s attacks on the Yazidis have been described as attempted genocide, since IS aims to kill all Yazidis which it describes as infidels. “The sole aim of IS was to destroy Yazidi identity through forced rape, the recruitment of children and the destruction of our temples,” said Nadia Murad, describing the Islamic State’s action as an orchestrated “collective genocide against Yazidi identity” and religion.

Murad escaped in November 2014 when her captor left the door unlocked and a neighboring family smuggled her to a refugee camp, Duhot, in northern Iraq before she sought and was granted asylum in Germany. Murad’s advocacy against IS’s trafficking of Yazidis led her to testify before the U.N. Security Council in December 2015. She called for the case of genocide against the Yazidis to be brought before the International Criminal Court and for an international budget, to compensate Yazidi victims, to be established.

Murad also expressed her wish to witness the liberation of occupied Yazidi territory and urged states to open their societies to Yazidi refugees. According to the U.N. Commission of Inquiry on IS’s June report, some 3,200 women and children are currently enslaved by IS. Murad would “bring much needed attention to international efforts to end human trafficking and help keep it on the Security Council’s agenda,” U.S. Ambassador to the Economic and Social Council Sarah Mendelson said.

The international response should be “commensurate with the scale of human trafficking” said Mendelson, noting that human trafficking generates an estimated 150 billion dollars in revenue annually with over 20 million victims. U.N. Secretary General Ban Ki-moon described Murad as a “fierce and tireless advocate for the Yazidi people and victims of human trafficking everywhere.” Ban also described the crimes against Yazidis by IS as possible genocide. “The crimes committed by IS in Iraq against the Yazidi may constitute war crimes, crimes against humanity and even genocide.” He called for the immediate release of thousands of Yazidis being held in captivity.

Human rights barrister, Amal Clooney, who represents Murad, described IS’s violence towards the Yazidis as a “bureaucracy of evil on an industrial scale.” IS have released a pamphlet entitled “Questions and Answers on Taking Captives and Slaves” which describes acts such as beating female slaves, raping female slaves who have not reached puberty, buying or selling or gifting female slaves.

Clooney also expressed her disappointment in the U.N.’s failure to stop the IS’s attacks on the Yazidis. “I am ashamed, as a supporter of the United Nations, that states are failing to prevent or even punish genocide because they find their own interests get in the way. I am ashamed, as a lawyer, that there is no justice being done and barely a complaint being made about it. I am ashamed, as a woman, that girls like Nadia can have their bodies sold and used as battlefields. I am ashamed, as a human being, that we ignore their cries for help,” said Clooney.

MINING: Health of the population in jeopardy

After the government of Peru in South America reduced the environmental quality standards to facilitate the sale of the metallurgical complex of La Oroya, the Archbishop of Huancayo, Msgr. Pedro…

At the beginning of each month, a “special ecumenical prayer for peace and harmony among communities, by all of our Churches and friends,” has been proposed by Msgr. Thomas Menamparampil (in photo),…