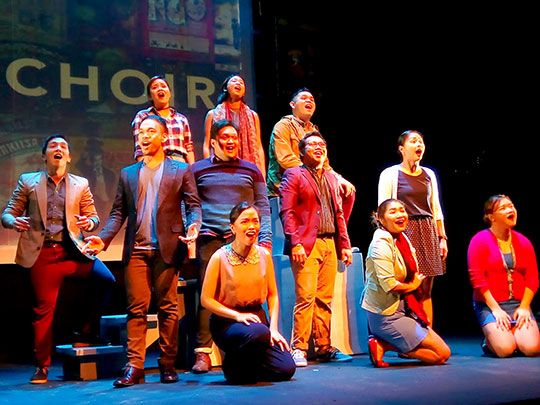 PETA marked a milestone in its long career recently. As the theater company celebrates its 50th year, it was given the prestigious Ramon Magsaysay Award. Find out what made this organization worthy of such an award.

As the top theater company in the Philippines celebrates its 50th year, it fills its golden season with outstanding and diverse productions. Yet, the icing on the cake is its being given  the Ramon Magsaysay Award.

“In contemporary theater, we really are one of the pioneers of Philippine theater,” said Maria Gloriosa S. Cabangon, Executive Director of PETA. “Championing plays that are in the Filipino language, ninety percent (of our productions) are original. We have contributed to the anthologies of work of Filipino plays in Filipino.”

Apart from encouraging the use of the national language, Cabangon shares that other strengths of PETA is that it focuses on social relevance and it continuously innovates its artistry by being experimental with different styles and forms.

Cecilia B. Garrucho, President of PETA emphasized this further. “Every work has to be somehow connected to people’s lives, to our issues. During the time of Martial Law, you could do serious protest plays, but the audience changes – especially the youth. You have to engage them, and if it is too serious and too heavy, why would they even come? You have to make it entertaining, fun to watch. You’re laughing at the same time you’re thinking. You’re asking questions, that is how we have developed the material.”

Golden season
Such is the case of the productions which PETA has lined up for its 50th season. One production is Caredivas (which ended last July). It is about overseas Filipino workers in Israel who are caregivers by day, and gay nightclub performers by night.

“It’s a musical and it touches on the challenges that many Filipinos face when they work abroad,” Cabangon shared. “At the same time it also tackles gender aspect, them talking about their identity, sexuality.  But also, how five people have developed friendship, love and respect for each other, which is significant to their survival as Filipinos working abroad.”

Garrucho added, “You’re laughing because the gays are so funny, there are so many jokes, but you’re also thinking, if my parent or a relative was an Overseas Filipino Worker (OFW), that is what they are going through. When they send me money, I don’t know the backstory. They go through so much trouble just to send me money. It makes you think, every play is like that. But we have to engage and entertain the audience, especially the young people.”

However, PETA presents it differently as A Game of Trolls is set in the present time with the story revolving on a young man who has been doing a lot of trolling. Cabangon revealed, “In fact in his trolling, he actually began as someone who supports Martial Law, and much later it’s like a job. In the process, he goes through a series of experiences, and in the end, he becomes an advocate on why Martial Law should not happen again.”

Mixing drama, comedy, visuals, and music, A Game of Trolls has been deemed suitable for those who have not lived during the dictatorship of Marcos.

Plays around the country
PETA performs also in different parts of the country, not just to entertain but also to educate. It created a program called Lingap Sining (Nurturing through the Arts). The group has been invited to Iligan to share their craft with the displaced families of Marawi, who are victims of the war.

In Leyte, they created a campaign on disaster risk reduction education for those affected by Typhoon Yolanda (international name Haiyan). “Our playwrights had to go to Leyte to interview people,” Cabangon said. “I think the most important input that we asked of them is that if we will make a play about Leyte and what happened, what is it that you want us to tell.”

With that PETA created a play entitled Padayon wherein the positive qualities of the victims of the natural calamity were shown. The small cast of PETA actors had to quickly learn waray (a Filipino dialect). PETA also asked a local group to be part of the play.

As Garrucho explained, “we could really connect with the audience, and they were laughing. It was funny, it was hilarious and it is something they appreciate. We’ve been down, and should we really look back on that. It’s fun moving forward and seeing how strong the whole community was.”

A song in the play was a reflection on what happens when they fall in line for relief goods. It was titled Pila, Pila, Pila. “We presented side stories while they are lining up for relief goods,” Cabangon said. “There are those who fall in love, there are those who fight – things like that – everything that happens while lining up. There are even those who ask, why do we need to fall in line?  They were laughing also because the stories came from them.”

Reaching out in Asia
However, it is not only in the Philippines that PETA seeks to create an impact. They also performed in other countries in Asia. In 2012, the seven-year program of the theatre group in the Greater Mekong Sub-region ended. PETA went to Thailand, Cambodia, Laos, Vietnam, Myanmar, and Southern China to mobilize, mentor, and support artists to explore how the arts can be used for social advocacy.

“We do not teach them the arts anymore,” Cabangon said. “You are here, first and foremost, to be good artists. You have to be good with your craft, that’s important. But it should not stop there. You should also be able to use that craftsmanship of yours for a greater good. It’s not just about yourself, you should be able to use it in the service of others. It does not have to be always political, but it has to have meaning to the people and the community.”

Garrucho shared that they performed with puppeteers in Myanmar, shadow players in Thailand, circus troupes in Cambodia, and other artists. She adds, “the idea was to convince them that while they 'puppet', they can inject the story of child trafficking for example.”

Cabangon went on. “How can you mobilize the arts community to use arts as a social advocacy?  In the Philippines, this is how we do it, maybe you can also explore it.”

Real stories
“From the start, our founder, Cecile Guidote-Alvarez, found it hard to find written material in Filipino,” Garrucho said. “So what she did was she got works of Filipino writers in English, and had it translated in Filipino. For her, the Filipino language was important, as how can the majority of the people understand if it is in English? From hardly any material to now numbering 540 productions, we are doing more and more Filipino plays.”

“The very concept of PETA is that it’s a theater that is very much linked to what is happening to society and to people,” Cabangon remarked. “Necessarily, we have to keep ourselves abreast with what is happening. Not just abreast, we have to be able to make a stand in critical issues that the company thinks is important, and that it is translated creatively on stage.”

“You meet real people, you hear real stories, you see real problems,” she said. “You know what poverty index is. But this is reality. That keeps us grounded, that keeps us humble, that keeps us abreast.”
As the group received the Ramon Magsaysay award, Garrucho said that it is an honor but also a responsibility. “You have to live up to that honor by continuing your work and to keep going far into the future as much as you can by passing the work on.”