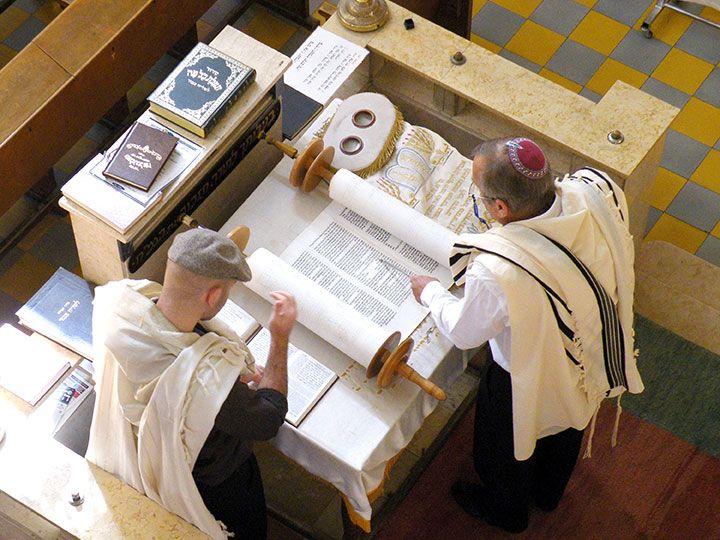 The Law is the content of the covenant between God and the chosen people. The Law is their great wealth, the reason for their glory in front of all the other nations. The heart of the Law is love: the Torah is their object of meditation, prayer, love and contemplation. In the New Testament, Jesus is the New Law.

“When Jonathan saw that the circumstances were working in his favor, he sent a selected mission to Rome to confirm and renew his treaty of friendship with the Romans. He also sent letters to the same effect to the Spartans and to the other places…”

“The following is the copy of the letter Jonathan wrote to the Spartans: ‘Jonathan, the high priest, the senate of the nation, the priests and the rest of the Jewish people to the Spartans, their brothers, greetings. In the past, a letter was sent to Onias, the high priest from Areios, one of your kings, stating that you are indeed our brothers, as the copy subjoined attests.”

“Onias received the envoy with honor, and accepted the letter, in which a clear reference was made to friendship and alliance. For our part, though we have no need of these, having the consolation of the books in our possession, we venture to send to renew our fraternal friendship with you so that we may not become strangers to you, for a long time has elapsed since you sent us the letter” (1 Maccabees 12:1-12).

This long quotation describes a rather unknown but significant detail in the history of Israel. The Maccabees, who have paid with a long struggle and much blood for their newly found independence and search for alliance with contemporary political powers, affirmed their pride in the unique wealth that God has given to the chosen people of Israel: the Scriptures which contain the Law of God.

A very special moment
The Law appears in a very special moment in the history of the chosen people. God has proven His love for them and His faithfulness to the covenant made with their fathers Abraham, Isaac and Jacob by bringing about the liberation of His chosen people from the slavery of Egypt. Now God brings His people deeper into His covenant by giving Moses the Ten Commandments, the Law (Exodus 20, Deuteronomy 5).

The Law is the content of the covenant for the chosen people: if they want to be God’s friends, they must keep God’s commandments. There is an essential link between monotheism and morality. We cannot please God or worship Him if we are bad, if we are crooks. It goes against God’s holiness and His goodness.

Torah, the Law, refers first of all to the Decalogue, the Ten Commandments, and, at the same time, to the historical circumstances of the revelation to Abraham and Moses contained in the first five books of the Scriptures, the Pentateuch. Law, commandments, precepts, ordinances, statutes: these are all terms that we find in Deuteronomy, the second exposition of the Law, more meditative and with greater awareness of the Law as a unique gift of Yahweh.

Importance of the law
The authority of the Jewish tradition reposed on the conception of the Covenant. The significance lies in the Israelite belief that the obligation of their laws flowed from the Covenant, that life under the Law was the duty which Yahweh’s covenant promises laid upon them. All Law was ultimately the will of Yahweh and was endowed to a degree with the supreme obligation which was imposed upon Israel through Moses.

The conception of the Law as the revealed will of God has no parallel in other Near Eastern collections of legislation. Hence, the conception of Law as a sacred covenant obligation is unique with Israel and it is fundamental in the Old Testament idea of society as governed by the will of God, and of history as determined by man’s attitude towards the Law.

The Prophets, fighting for God and the Covenant against the unfaithfulness of the people, already point out that the heart of the covenant is love, in this way anticipating and preparing the New Testament: they do this with the divine allegory of marriage: Yahweh is the husband and the chosen people are the bride (The Song of Songs).

In this they again reflect the very important passage of Deuteronomy 6:4-9 (“Shema, Israel”) that represents the Jewish confession of faith: “Listen, Israel: The Lord, our God is one Lord, and you shall love the Lord your God with all your heart.” The Law is the prime way by which the people’s love for God is fulfilled and expressed.

“A lamp for my steps”
After the exile, the Law was no longer the rule of an independent society: Judaism preserved it by making it a guide of life, identifying the Law with wisdom and finding in it all knowledge, human and divine. The joy of the Jew in the Law is reflected in the “Torah Psalms” 19 and 119. The Torah is object of meditation, prayer, love and contemplation: Psalm 119, the longest psalm, is all this.

The terms used: commandments/laws/decrees/precepts/ways/word…show us that the whole Jewish spirituality is centered on the Torah: “I will meditate on your precepts and fix my eyes on your ways” (verse 15); “I will delight on your statutes; I will not forget your word” (16); “Lead me in the path of your commandments for I delight in it” (35); “Your word is a lamp on my feet and a light on my path”  (105). This contemplative prayer is born of love for the Law and generates joy.

The law as wisdom
The Wisdom Books of the Old Testament are centered on the human condition and describe the drama of human beings subject to fragility and mortality. Yet, in this grim picture of human nature described so well in the book of Qoheleth, enters the concept of our dignity because, created in the image and likeness of God, human beings are the only creatures capable of receiving God’s Revelation.

It is appreciation and obedience to God’s Law that becomes wisdom by which we are able to recognize the existence of God and appreciate His covenant. “The beginning of wisdom is the fear of the Lord” (Proverbs 1:7). This fear is the sense of awe, reverence, respect, obedience, and love.

The opposite attitude is foolishness or stupidity as it is stated forcefully in the beginning of Psalm 14: “The fool said in his heart, there is no God”: this foolishness is a consequence of a corrupt behavior, the disobedience of the Law.

Jesus is the law
Jesus does not abolish the Ten Commandments: the Beatitudes do not take the place of the Decalogue, but are Jesus’ “Blessed Attitudes” that He proposes also to us. Jesus completes and perfects the Law, making it new and showing all the implications (Matthew 5:17-48), and yet the two most important commandments are taken from the Old Testament.

The novelty introduced by Jesus is the joining of the two commandments and saying that the second is equal to the first. Moreover, Jesus puts Himself as an example of brotherly love: “This is my commandment: love one another as I have loved you” (John 15:12). Above all, Jesus presents Himself as the object of our love for the brethren: “Whatsoever you do to the least of my brothers it is to Me that you do it” (Matthew 25). By doing for Jesus, we recognize and honor His divinity – Jesus is the New Law.

Jesus rejects the Law as a sufficient means of righteousness. In addition to the Law, a person must accept Him as one whose words are not only equal to the Law, but who comes as a new Moses revealing the Father. If one accepts Him, then one’s sinfulness will not be an obstacle to the kingdom of heaven, for the Father is forgiving.

But those who place their confidence in their observance of the Law make an obstacle of the Law. Because the Law is of itself an insufficient means of reaching God; it must be fulfilled and reach its fullness in Him. The Law is fundamentally what Jesus insists that it is: the revealed will of God. Those who accept this revelation cannot make it an excuse for rejecting the fullness of the revelation of God to which the Law is directed, namely Jesus the Christ.

“Profit should not be the only goal of companies”

According to economist and member of the Focolare Movement, Luigino Bruni, the way ahead to change the economy and eradicate poverty is by proposing different, nonprofit oriented companies that…