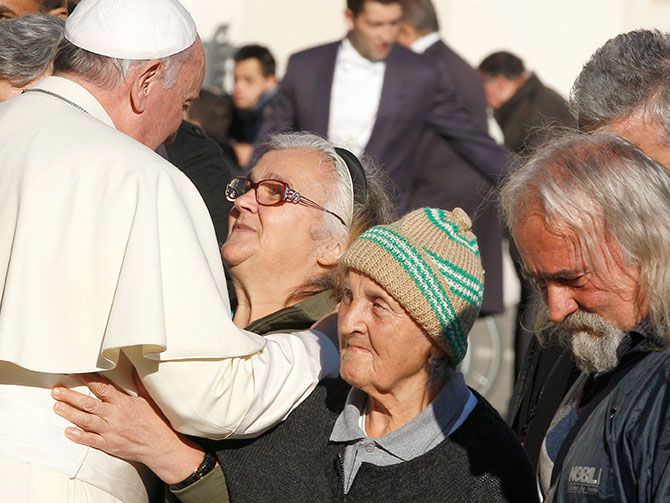 November 19 has been declared by Pope Francis as the first World Day of the Poor. This is to make us reflect that the only way to uplift the lives of the poor is to see them as Jesus Christ sees them, as a brother, a sister. We are invited to share what we have with those who are marginalized.

Due to material poverty many people cannot live in a dignified and serene manner since they do not have the basic human needs: food, shelter, health, education and work. This is the kind of poverty we are called to fight against.

But there is another kind of poverty by which people share everything they possess with others so that all may have what is necessary to simply live well. It is the poverty proclaimed by Jesus as one of the Beatitudes: “How happy are the poor in spirit; theirs is the Kingdom of heaven.” (Mt 5:3)

The above statement is part of the Social Doctrine of the Church and it reflects also the mind of many men and women who have been sharing their riches with their brothers and sisters. They recognize that the energy for doing that comes from love. It is love that enables them to say: what is ours belongs also to others and we share it with joy.

Martin de Porres
Martin de Porres, a Peruvian saint, is a good source of inspiration for all those who dream about great changes and are ready to commit themselves in order to make their dreams come true.

Martin was born on December 9, 1570, in Lima, Peru. He is the son of a Spanish army officer and a negro woman, a freed slave, from Panama. Before entering the convent of the Dominican friars, Martin exercised his profession as barber and nurse. At first he was admitted in the convent as a person in charge of humble services which were appreciated by the community. Later on he became a lay brother.

He committed himself with passion and efficacy to protecting the slaves. His infirmary became a center of charity for all without any distinction, but in a special way for poor negroes. During the celebration for the canonization of this saint (May 6, 1962), Pope John XXIII said: “Saint Martin, in his total openness to Christ’s teaching, loved his brethren with a love that sprang from humility and an unclouded faith. He loved them as God’s children and as his own fellow human beings.”

In the spirit of the beatitudes, Saint Martin was always happy with the distinctive signs of humility and charity. He was able to establish the first college in America exclusively for poor children.

Poverty in spirit
While St. Martin de Porres was helping the poor, he lived and promoted the poverty exalted by Christ Jesus in the Beatitudes: poverty in spirit which always goes together with simplicity. This is the poverty which must be at the heart of mission.

In one of his books, the American Jesuit John Powel wrote that if he had lived at the time of the Incarnation and God the Father had put him in charge of preparing everything for the coming of Jesus, he would have invited the best musicians and the best dancers in the whole Roman Empire, including  all the powerful people.

By doing this he wrote that he would have made the most foolish mistake. People would have been attracted so much by all the futile things around and would have missed the presence of the Savior. In His wisdom, for the circumstances of the birth of Jesus, God chose the quiet of the night and the simplicity and poverty of the place His parents were able to find.

Jesus, the Light of the world, lived in humility and as a marginal person together with Mary and Joseph, without any recognition by the world that was badly in need of His presence and saving action. Truly Jesus lived as the hidden corner stone of the building of God’s kingdom He had inaugurated with His birth. This makes us understand that not only for the salvation of the world   must we proclaim the importance of the Paschal Mystery in the earthly life of Jesus, but also the many years of His hidden life were equally important.

In the chapel of the Carmelite monastery of Nova Nada (U.S.A), there is a cross with the body of Jesus completely naked. According to many historians, Jesus was hung on the cross naked. For me this is a very touching detail: in the moment of greatest intensity for the salvation of the world, Jesus was not busy with frenetic activity; He was in the situation of active passivity and extreme poverty of the cross. He died naked without any power, any mask, any veil, any disguise.

The eucharist
There is a statement of the Second Vatican Council which is loaded with meaning: “The Eucharist is the source and, at the same time, the summit of all the life and activity of the Church.” In the documents of the Church, there are other statements which affirm the importance of the Eucharist and yet Jesus becomes present during the Eucharistic celebration, while what our senses can control is little: the bread and some wine. Jesus then remains present in our tabernacles under the species of bread.

In the Gospels, Jesus identifies Himself with all human beings as they are, in their humanity, in their fragility, in their poverty. And He is so happy for this, that He acts as if He could not stay without us.

I cannot forget what an elderly confrere of mine told me soon after I arrived in Africa in 1975: let us always remember, he said, that for us missionaries, recognizing Jesus present in our brothers and sisters, no matter how fragile they are, is a privileged way of adoring Him.

Sharing with joy
Whoever operates in the field of mission must be aware that he has this call from God: to imitate Christ in His poverty and simplicity, choosing the means He chose; not power at any cost and no matter what, not imposition, not doubtful human alliances, but meekness, mercy and love given to the point of poverty and crucifixion.

In this way, the revolution of love needed for lifting up the conditions of the poor of the world will be realized. A revolution of love is in the heart of mission which was inaugurated and lived by Jesus and which is the only one able to transform human hearts and make life more dignified, richer and more real. This revolution of love can be expressed like this: “What is mine is yours and I share  everything I have with joy”.

Assuming this revolution, we fight against the two philosophies practiced by so many throughout the world:

The philosophy of selfishness and isolation which could be expressed like this: “What is mine in mine and I keep it; woe to the person who touches it.”

The philosophy of the thieves: “What is yours is mine and if you do not give it to me I will grab it by force.”

In the second philosophy, let us remember that there are thieves worse than those who rob material things.There are fanatics, groups and even nations robbing the dignity, freedom, peace and happiness of the many people they oppress.

We all have something to give. In order to act, we need only love and good will.

There are five different basic types of Christian Prayer: Adoration, Petition, Intercession, Thanksgiving, and Praise. In this article, the author deals with the prayer of thanksgiving and…

Hope for a Renewed World

Hope is a necessary virtue in our pilgrimage on earth. It is by hope that we are saved and find the source of energy to live with faith and passion. In a world permeated by pessimism, God gives His…