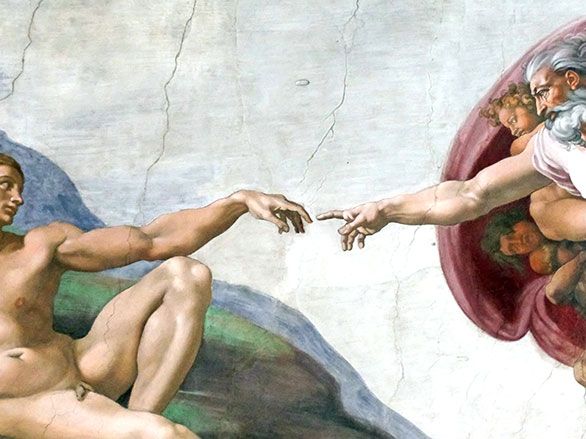 When David wanted to build a temple, God was reluctant to accept: heaven is his dwelling and the earth his footstool. But Yahweh overlooked his transcendence and entered history – first the ark and the tabernacle, next the temple, were then symbols of His presence among His people. In the fullness of time, Jesus’ flesh is the real throne of God’s Presence.

Worship in the Old Testament consisted in sacrifices of animals, performed in an official place, the temple of Jerusalem, by a specialized priestly group, the tribe of Levi. Animals took the place of  human beings (substitution); the blood, the symbol of life, was the seal of the covenant that meant binding us with the strength of life itself. To violate the covenant was to deserve to die.

In the beginning, sacrifices were done in the open air. Classic examples of sacrifices of animals in  important moments of the history of the covenant were the ones performed by Abram in Genesis (15:1-21), where God passed as a flaming torch between the halves of the victims, and in Exodus (24:1-8), when Moses sprinkled the blood of the victims on the altar – the symbol of  God, and  on the people.

“The mercy seat”
It was at this moment that the two tablets of the ten commandments appeared and with it, the ark of the covenant to house them. The lid of the ark was plated with solid gold and it held the statues of the two cherubim at the two ends. In the middle was the most sacred space called “the mercy seat” or “God’s throne”. “God was enthroned upon the cherubim” (Psalm 80:2).  It suggested that the ark was the throne upon which Yahweh stood invisibly upon the cherubim. Since there was no image of Yahweh, only the footstool was represented. God’s throne was empty.

All the same, the ark was the symbol of Yahweh’s personal presence, the place where atonement was received, where divine communication was granted. It was carried into battle to symbolize Yahweh’s kingship and leadership. It was also the symbol of the covenant of Yahweh with Israel: He was present because He had elected them as His people and imposed upon them the commandment which the ark contained.

Longing for the temple
The first temple, David’s dream, was built by Solomon and inaugurated with solemn prayer and abundant sacrifices. During all the vicissitudes of the exile, the wandering Jews had a strong nostalgia for the temple of the Lord. Every restoration, with Esra, with the Maccabees, etc. was centered around the temple where regular sacrifices were resumed as symbol of the normality which had returned to Israel.

The temple was the object of devotion: longing, love, joy: “How lovely is your dwelling place, Lord, God of hosts. My soul is longing and yearning for the courts (the temple) of the Lord. The sparrow finds herself a home and the swallow a nest for her brood…” (Psalm 84:1-3).

The whole section “The Psalms of ascents” (120-132) develops the spirituality of pilgrimage, the various sentiments, worries and joys of the pilgrims going up to the temple of Jerusalem.”I was glad when they said to me: ‘Let us go to the house of the Lord!’ Our feet are now standing within your gates, O Jerusalem!” (Psalm 122:1-2).

A polemic against the temple and the sacrifices was developed by the Prophets and that finds echo in the Psalms (Psalm 50:9-15). The tragic destiny of prophet Jeremiah was due to his words against the temple where the official worship became corrupted and about the temple’s coming destruction in the conquest of Jerusalem by the Babylonians. This was a prophecy and a preparation for the New Testament.

Jesus’ body
The episode of the cleansing of the temple by Jesus is related in all four Gospels. John places it at the beginning of the public ministry of Jesus as a keynote declaration: “Destroy this temple and in three days I will rebuild it” (John 2:19). Jesus here affirms that He Himself becomes the cultic center, the place where God is present in His dwelling: as such He is greater than the temple (Matthew 12:6). It is in harmony with this saying that he should have predicted the destruction of the temple, as all the Synoptic Gospels relate.

Jesus, facing death as an act of supreme obedience and filial love, becomes the true temple that is destroyed by men’s evil power but raised to a new life by the Father. Jesus’ priesthood is not ritual but personal. Jesus is the mediator of the New Testament, bridging the infinite gap between God and humanity with His obedience and sacrificial love.

According to Jesus’ example and command, all Christians are constituted priests because of their baptism, continuing in the world Jesus’ mission through their mediation of love. The Eucharist, which is the memorial of Jesus’ Paschal Sacrifice, is the worship of the New Testament, “the source and the summit of the Church’s life.”

Ultimately, the theological significance of the temple in the New Testament is based on the saying of Jesus which identifies His body as the new temple. His body in turn is identified with the Church, and the Church herself is the new temple. The Church is the place of God’s presence, not merely symbolic but real through the indwelling of the Holy Spirit. The Apostles and the prophets are the foundations of the temple and Christ is its corner stone and principle of unity.  The Christians are the living stones of this temple and its consecrated priesthood.

When the earth is renewed by the descent of the heavenly city as in Revelation 21, there is no temple in the city, because the Lord God and the Lamb are its temple. This is not inconsistent with the vision; rather here, in the last page of the Bible, the symbolism of the temple arrives at His fullness. For the symbolic presence of God among His people is at last replaced by His dwelling among them.

Many have said that the Philippine February 1986 revolution was bloodless with the Holy Rosary as the weapon. It was believed to have been guided by Our Lady Who Commands Soldiers and could even be…