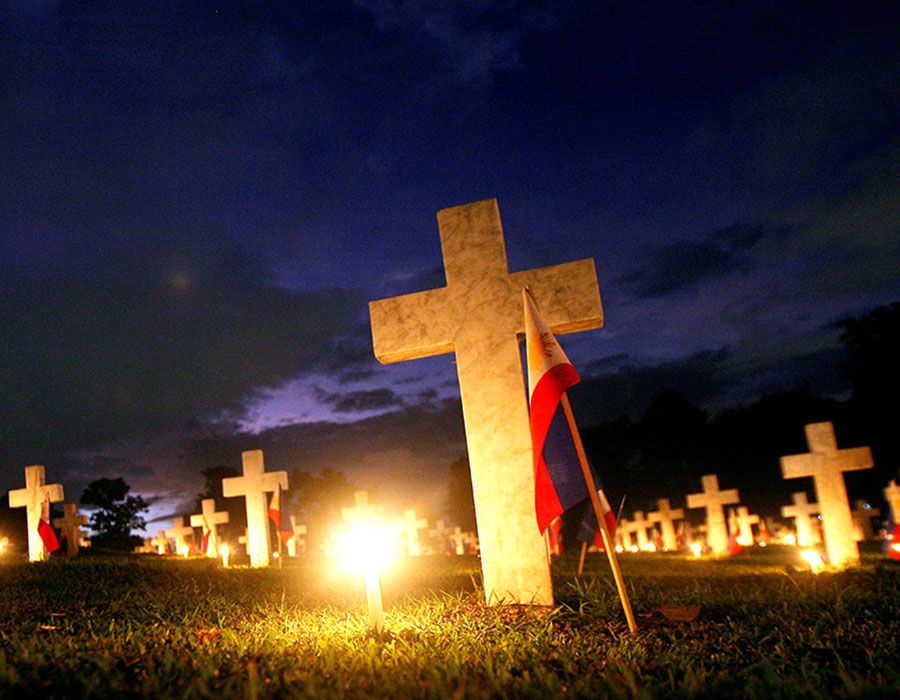 Every year on November 1, millions of Filipino Catholics visit cemeteries across the country to honor their departed loved ones. All Souls Day reminds us of the inevitability of death and why we should lead meaningful lives.

Although All Souls Day is November 2, the majority of Filipino Catholics visit cemeteries across the country to honor their departed loved ones on November 1, All Saints Day. This is why older-generation Filipinos refer to the annual observance as Todos los Santos, short for Dia de Todos los Santos, Spanish for All Saints Day. It is also called Undas. According to the educational website Philippine History, Undas is derived from the Spanish honrar (“to honor”). How did honrar become Undas?

Family Reunion
For 16-year-old Nico Ramos, All Souls Day is a twice-a-year celebration. “One on my mother’s side of the family, another on my father’s side,” says the grade 10 student of Don Bosco Technical Institute, Makati. Nico, his parents and four siblings go to a memorial park in Taguig City every first of November to pay their respects to his mother’s deceased parents. “We say a prayer for our departed relatives and then we eat a potluck dinner with our uncles, aunts and cousins. It’s a happy family reunion.”

Nico’s family visits the Ramos cemetery plot in a Central Luzon province a few weeks before or after November 1 when there are fewer people and less vehicular traffic. “We go on a four-hour drive on a weekend to join our relatives on my father’s side in visiting my grandfather’s tomb. My grandmother who is very religious leads the prayer for the whole family.”

The annual observance of All Souls Day, explains Nico, brings their family closer and gives them the opportunity to keep in touch with relatives, both the living and the deceased. When asked about his thoughts about death, the young man’s answer belied his age. “I’d only be scared of death if I didn’t live a meaningful life. Death comes to us all. Rather than think about death, I focus on being a good person while I’m still alive.”

A Different Perspective
It has been 15 years since Maria (not her real name) last visited a cemetery. “I don’t see the point of visiting bones or ashes because I believe the spirit of my departed loved ones are with me wherever I am,” says my friend who requested anonymity for personal reasons. In the case of a close friend who passed away a few years ago, Maria has an additional reason for not visiting the columbarium where the deceased man’s ashes are interred. “It’s a stark reminder that he’s gone, it’s too sad.”

As a child, Maria remembers going to the cemetery with her parents every year on November 1. “Even then I already felt it was a pointless activity, but I did enjoy seeing my relatives, maybe that was more the point.” Raised by Catholic parents and educated in a Catholic school as a child, she admits feeling “a bit guilty” about her non-traditional beliefs. “But I have to go by how I feel and believe, and not how I was taught to do things.”

Maria had previously decided she wouldn’t get a funeral or columbarium plan, but later changed her mind. “I realized that my family doesn’t share my beliefs and would want to visit ‘me’ after my death.” Although she no longer visits cemeteries and columbaria, Maria offers prayers for her departed loved ones. “I pray that they are happy wherever they are. I sometimes ask them for help, just for small things.”

Now in her 40s, she confesses to being scared of pain and suffering more than death. “I hope that I don’t have to suffer too much before crossing over to the other side, and that I don’t go before my parents.”

Memories From A Bygone Era
November 1 is doubly special for my mother Consuelo who was born in Pandi, Bulacan on All Saints Day 84 years ago. Her earliest recollection of Todos los Santos is just after the end of the Second World War when she was 11 years old. “On the morning of Undas, my mother and I would walk to the church to hear mass. At lunchtime in our house, our family would eat nilugawang manok [chicken and ginger congee] to celebrate my birthday.”

At around four in the afternoon, she, her mother and siblings would walk to the cemetery. They would pray the rosary and light candles at the tombs of their departed loved ones. Assisted by a sakristan (acolyte), the parish priest would go around the cemetery blessing tombs with holy water. Sometimes the priest would be accompanied by cantoras (singers) who sang church hymns. “There was no eating or drinking. Back then, Undas was more solemn and less crowded.”

In the evening, a group of people would stop in front of my mother’s house, sing a traditional song for the dead, and ask for alms. “My father usually gave 10 centavos, which was considered generous in those days,” she recalls. This is called pangangaluluwa (noun, from kaluluwa, Tagalog for “soul”), a tradition observed in Bulacan to this day, and the roving minstrels are said to be nangangaluluwa (verb). After the pangangaluluwa, it was bedtime for the whole family. At midnight, the eve of All Souls Day, they would wake up and pray the rosary for the souls of their departed relatives.

My mother continues to observe Undas by hearing the early-morning mass in the same church where she and her mother heard mass in the 1940s. However for the past several years, she has had to forgo visiting the tombs of departed loved ones because of her arthritic knees. “In my old age, I often think about death with a mixture of fear and hope,” my mother says. “I pray that God forgives my sins and allows me to enter heaven.”

Fulfilled Life
Like my mother, 72-year-old Professor Randy David admits that he has “reached the age when one is inescapably visited by thoughts of mortality — no doubt partly as a result of attending too many wakes and listening to eulogies to honor contemporaries who have gone ahead.”

Writing on the eve of Undas last year about “The terror of death” in his newspaper column Public Lives, the respected Filipino journalist, sociologist and academician thanked our culture “for adequately equipping us with the means to deal with the fact of death in such a way that it does not intrude into our everyday lives.” Our culture, Prof. David explained, makes it “possible for anyone to talk about who died and from what causes, and not be bothered by the thought that this will happen to us, too. We quickly bounce back from grief, and, indeed, it is taken as a sign of a mental health problem if one person’s death triggers in us an enduring personal distress.”

Prof. David also shared the intriguing findings of the book “The Worm at the Core: On the Role of Death in Life”, a product of 25 years of in-depth groundbreaking research by three experimental social psychologists that reveals how our unconscious fear of death drives almost everything we do. The authors Sheldon Solomon, Jeff Greenberg, and Tom Pyszczynski write, “We discovered that subtle, and even subliminal, reminders of death increase devotion to one’s cultural scheme of things, support for charismatic leaders, and confidence in the existence of God and belief in the efficacy of prayer. They amplify our disdain toward people who do not share our beliefs even to the point of taking solace in their demise… They magnify our phobias, obsessions, and social anxieties.”

According to Prof. David, the authors try to explain their findings by connecting them to the two basic human attempts to cope with the fear of death. The first is by seeking refuge in the stability of meanings within the “scheme of things”; anything and anyone that disturbs this imagined stability is seen as a threat and must be confronted. The second is by grounding our self-esteem in the contribution that we think we are making to the scheme of things.

The American existential psychotherapist Irvin Yalom, over a professional career spanning five decades, has helped many people in the twilight of their lives cope with the terror of death. In the article “How to Die” written by Jordan Michael Smith and published in the October 2017 issue of The Atlantic, the 87-year-old Yalom grapples with his own mortality and shares his thoughts on death. “If we live a life full of regret, full of things we haven’t done, if we’ve lived an unfulfilled life,” Yalom says, “when death comes along, it’s a lot worse.”