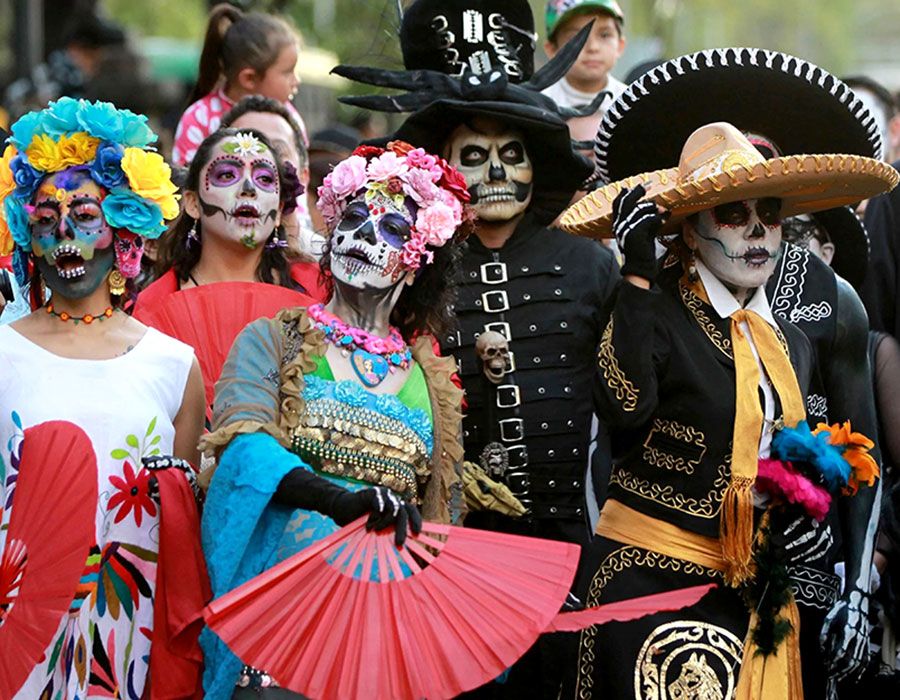 From October 31 to November 2, Mexican popular culture represents death with humor and affability. According to Aztec ancestral traditions mixed with Christianity, in these days the ancestors return from the other world to visit the living.

Formerly, Mexican families buried their dead in the land on which their home was built. It was a way of expressing that the dead man was still part of the family, even if his soul was in a better place called Mictlán, a quiet and pleasant dwelling, where they rest placidly.

To celebrate the bonds between the living and the dead, in the 18 months of the Aztec calendar, there were at least six festivities dedicated to the dead. One lasted for almost a month, the ninth of that calendar. According to the belief of the Aztecs, these days the dead had divine permission to visit relatives and friends. Then there were great dinners at home.

With the passing of time and the development of cities and migrations, the family was not all gathered in the same place, just as it was no longer possible to bury the dead in the house itself. As a result, families began to celebrate the Day of the Dead in the cemetery and to have their family reunion there.

When the Spanish missionaries arrived in Mexico, they tried to Christianize the feast, but only managed to change the date to coincide with the Day of the Dead in the Catholic calendar. In fact, in the tradition that has reached the present and is transmitted to the new generation, the Day of the Dead mixes humor, songs, dances, costumes with death fantasies, sweet “skulls” with the names of the relatives, the Virgin Mary, and crucifixes. Even the newspapers publish humor in strips with skeletons, and there are even plays performed by the “dead”.

In 2003, the Day of the Dead was declared an Intangible Cultural Heritage of Humanity by UNESCO, which considered it “one of the most relevant representations of the living heritage of Mexico and the world and as one of the oldest and strongest cultural expressions among indigenous groups from the country.”

Rituals For And With The Dead
The Mexicans mark two moments for the arrival of the souls of the ancestors. Between 31 October and 1 November, they celebrate those who died as children. November 1 is the Day of the Angels. Children wear colorful satin fabrics and white shoes, becoming the center of the ceremony. The girls chant verses purposely composed for the ritual. November 2 is dedicated to those who went to the other world during adulthood.

In these celebrations there is no pain or mourning for the cordial “ visitation” of the deceased is a source of joy, not sorrow. For the Mexicans, the dead should be received with a feast and with the things they enjoyed while alive. Therefore, they adorn the tombs and bring offerings to the ancestors. The Day of the Dead is a time to enjoy company.

On the two nights, vigils are held throughout Mexico in honor of deceased relatives. One of the typical foods and one of the most traditional symbols is the sweet “skull”, made of sugar. This delicacy is a gift for the dead and the living. The dead people’s favorite food and tequila for adults is served. Children get toys.