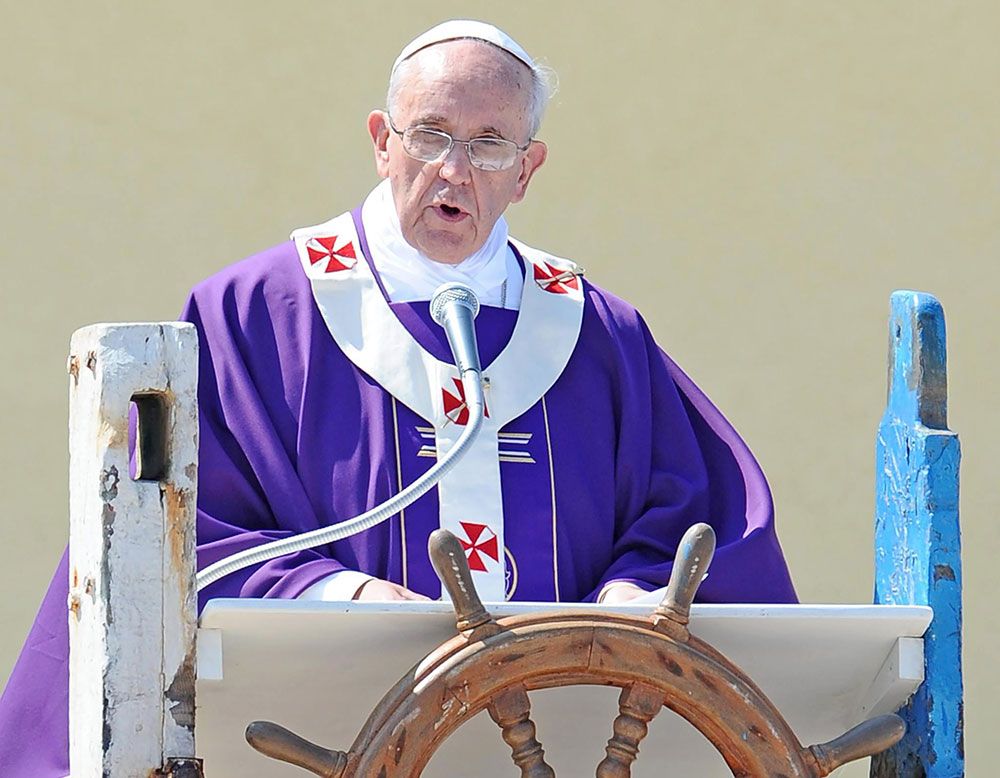 "Where is your brother?” Pope Francis cites these words from the Book of Genesis. He has only recently been elected to the Chair of Peter and is now standing under a blazing sun, near an altar set up in a small boat made of blue, green, white, and red driftwood. He forcefully repeats the question that God asked Cain following the first fratricide in history.

“Where is your brother? His blood cries out to me, says the Lord. This is not a question directed to others; it is a question directed to me, to you, to each of us,” says the new pope. Less than four months after his election he has chosen to travel to Lampedusa for his very first trip outside of Rome. This is where migrants perished at sea while trying to cross the Mediterranean. “These brothers and sisters of ours were trying to escape difficult situations to find some serenity and peace,” Francis says, standing at an ambo decorated like the helm of a ship.

“They were looking for a better place for themselves and their families, but instead they found death,” history’s first Latin American and Jesuit pope continues. A few minutes later, he says grimly: “We have lost a sense of responsibility for our brothers and sisters.”

Since his visit to Lampedusa seven years ago, Francis has never stopped rolling out this thread of solidarity. Sometimes he does this even more explicitly, as in his first message for the World Day of Peace on January 1, 2014. The title of the text sounds like a program-Fraternity, the Foundation and Pathway to Peace. And the pope describes solidarity as an “essential human quality.”

This is only a question of recognizing that the common solidarity of humanity finds its source in the same God. Francis is convinced that it is also necessary to grasp the very concrete consequences–chief among them, peace between peoples. But the 83-year-old pope also sees solidarity as a principle to be implemented at the political level so that everyone has “access to capital, services, educational resources, healthcare and technology.” Solidarity is thus an essential ingredient for “defeating poverty.”

Everything Is Connected
In Laudato Si’, his 2015 social encyclical, Francis insists that “genuine care for our own lives and our relationships with nature is inseparable from fraternity, justice and faithfulness to others.” And from this stems the principle he repeats often in the text and has continued to reiterate ever since: that “everything is connected.”

The pope made this link again in September 2015 while taking part in an interreligious meeting at the 9/11 Memorial in New York City. He evoked the hours following the September 11 attack. “No one thought about race, nationality, neighborhoods, religion or politics,” he said.

“It was all about solidarity, meeting immediate needs, brotherhood. It was about being brothers and sisters.” Fraternity was summoned again in the historic joint document that Francis and Ahmad Al-Tayyeb, the Grand Imam of Al-Azhar University, issued on February 4, 2019 in Abu Dhabi. “Faith leads a believer to see in the other a brother or sister to be supported and loved,” the document says.

“Through faith in God, who has created the universe, creatures and all human beings (equal on account of his mercy), believers are called to express this human fraternity by safeguarding creation and the entire universe and supporting all persons, especially the poorest and those most in need,” it declares.

It is therefore natural that Pope Francis adapted this concept throughout the health crisis of COVID-19, making it the foundation of human dignity, the common good, the preferential option for the poor and the universal destination of goods. It is expected that the pope will continue to unfold these concepts in his new encyclical Fratelli Tutti, which he signed last October in Assisi at the tomb of papal namesake, Saint Francis. Published in La Croix International

The Doctor of God

The Italian Comboni Missionary, Fr. Giuseppe Ambrosoli, will be beatified in Kalongo, Uganda, on 22 November 2020. For more than 30 years, he dedicated his life to helping the people, expanding a…