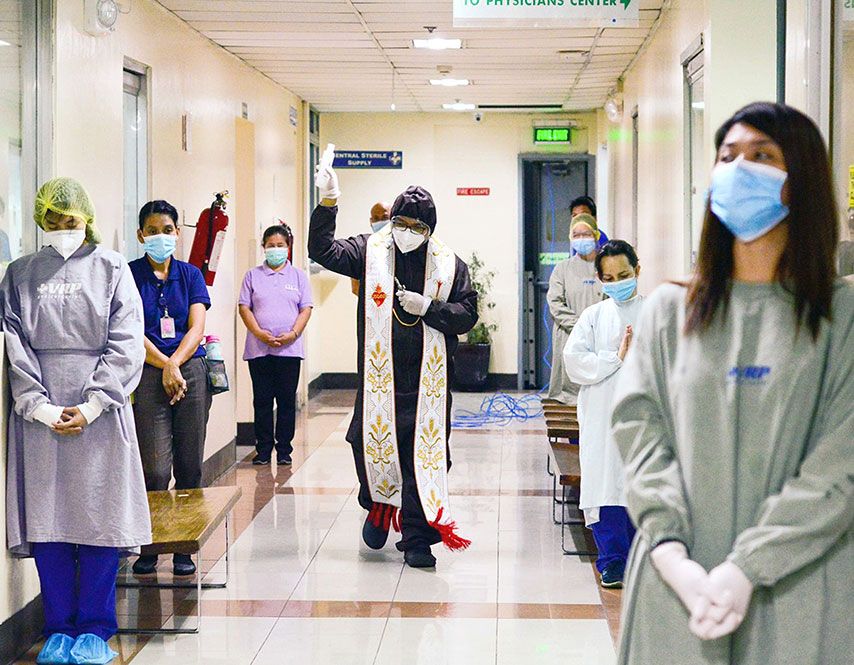 Where There is Pain, There is God

Human beings will never understand why suffering exists, admits the priest and theologian Robin Ryan but concludes: “Even in the midst of our pain, there is God.”

We all know what it is like to feel pain and loss. Whether from the loss of a loved one, a cancer diagnosis, or a natural disaster, everyone experiences suffering. According to Fr. Robin Ryan, an associate professor of Systematic Theology at the Catholic Theological Union (CTU) in Chicago and a Passionist priest, the presence of suffering is the one thing that challenges our faith the most.

For Fr. Ryan, the solution is for Catholics to articulate their personal beliefs about suffering through ongoing conversation with others. As such, his book, God and the Mystery of Human Suffering: A Theological Conversation Across the Ages, offers no definitive answer to the questions of suffering, but instead shares the wisdom of thinkers ranging from Thomas Aquinas to Elizabeth Johnson. The goal is for readers to refine and enrich their own personal views on suffering and God’s presence in the midst of pain.

What’s so mysterious about suffering?
A problem is something that’s solvable, at least eventually, but a mystery is not something you can solve. It’s something you encounter that you have to grapple with and learn to live with and try to make sense of the best you can, but there is no overarching explanation that can put a mystery into some nice, rational box.

If God is all-powerful and all-good, why do bad things happen?
That question is the basis of what is known as “theodicy,” or the rational attempt to explain how God can be omnipotent and all-good and yet allow suffering and evil to exist. Again, we’re standing before mystery. There is no way to wrap your mind around suffering and no explanation that will leave the mind at rest.

Theologians today say that suffering is a scandal and we have to allow ourselves to be scandalized by it again and again. Jürgen Moltmann is a German theologian who was conscripted as a teenager into the German Nazi Air Force and later put into a prisoner of war camp for three years.

In the camp, an American chaplain gave him a Bible. He came across the psalms of lament first, and then Mark’s account of Jesus’ Passion. He said something along the lines of, “When I read Jesus’ death cry, ‘My God, my God, why have you forsaken me?’ I realized this is someone who understands me, and I came to understand him.”

So rather than trying to answer the question of why, theologians today say that the more important question for us is where: “Where do I find God in suffering?”–and it’s here that the Christian story of the Cross and Resurrection has something to say.

What can suffering people learn from the Cross and Resurrection?
The Incarnation tells us that God chose to save us by punching into this world–with all of its beauty and its tragedy–to save from within, rather than sending heavenly armies marching in. In Christ, God knew exactly what suffering was: Christ truly entered into suffering. God, in some ways, is forever different because of humanity.

This is an assurance of God’s compassion and God’s presence with the suffering person. The Resurrection assures us that God can be found in the one who is suffering, even when it seems like a Godless situation.

Does God suffer with us?
The traditional answer is no, because God is immutable and to suffer is to change or to be changed. Because of the Incarnation, the Son of God suffered on the Cross, though in His human nature, not God’s divine nature. So even though the person of God suffered in a way, that suffering was kept separate from God’s divine nature. Traditional theology brought suffering as close as possible to God, but didn’t quite let it touch God.

Modern theologians, including feminist theologians, say that God is impinged upon by our sufferings and this isn’t a bad thing. The ability to freely enter into the suffering of another is an excellence, not an imperfection.

Did Jesus have to suffer on the Cross to save humanity?
Jesus came to offer salvation and to proclaim the nearness of God’s kingdom. He made that reign of God present in His words and His deeds: touching the leper, dining with sinners, etc. His suffering was a result of living that ministry in a world where people reject God’s visitations. The suffering needs to be seen as an outcome; He got Himself in trouble by the way He lived.

Does the Church ever fall short when it comes to caring for suffering people?
Sometimes pastors want to have quick answers for people, rather than sit with them. Even in preaching, we want to sound convincing and like we know something. We fall short when we resort to prefabricated packaged answers. We need to reflect on what our words convey about who God is. What kind of image of God is underneath what I am saying?

Take, for example, the old adage we tell people after a child dies that says something like, “God wanted another angel in heaven.” It makes God into a celestial kidnapper; or take what we say about someone’s death or another tragedy being “God’s plan.” When people use this language, I think they’re trying to express that God is at work in our lives, that God guides us and is present to us and is leading us along the way.

Unfortunately, this language can also make it seem like God is the master chess player who’s looking down on the chess board, moving all the pieces around, and knocking a few over in the process; or that God is a master software programmer. He knows all the on and off switches and exactly what circuits to use. It makes it sound like God gives you this suffering as part of your trip through the maze to get home.

What is your pastoral response to people who are suffering?
I encourage people to cry out to God, echoing the psalms of lament. It’s okay to be angry at God; people should speak as honestly as they can. When it’s appropriate, I encourage those to whom I minister to trust that God is with them and to hold on to God’s hand through the suffering.

If someone asks me “Why did this happen?” I just say, I don’t know why. I don’t have any answers. I believe God is present with us and works to bring some good out of pain, and I believe that it’s still important for people to hear that–but I don’t tell people that right away. I let people pour out their pain first.

Does your response to a huge tragedy–like terrorist attacks or a natural disaster–differ from your response to personal suffering?
In either situation–personal suffering or a huge tragedy–what I try to do as a pastor and a Passionist is to be present. I think the best thing is to try to be Christ to that person. Don’t just come up with answers but be Christ’s presence. That’s the best thing you can give someone in that situation. In the case of larger tragedies, we find ways to express solidarity–whether it’s a prayer service or spiritual and material assistance.

Can we learn anything from suffering?
When you’re talking about suffering, you draw on your own experience, no matter how academic you may be. So by listening to a lot of voices at the table, you gain more wisdom than if you just listen to one set of them or one person.  Published in www.uscatholic.org

Philippine migration has both its positive and negative aspects. A balance of the benefits and costs of migration remains a challenge for Filipino migrants, their families, the government, the church…