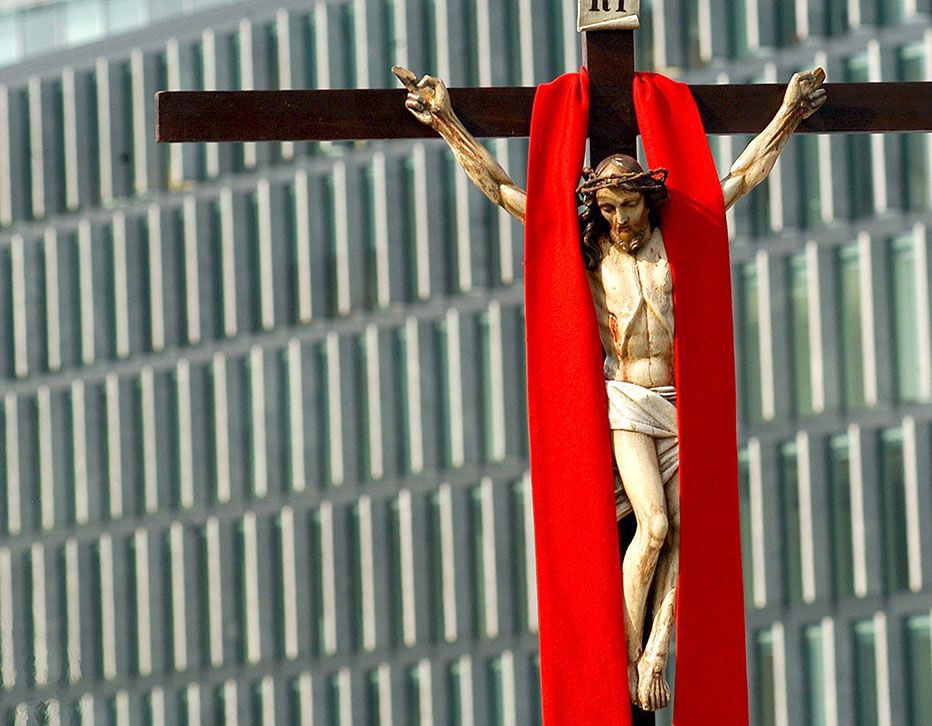 Why Did Jesus Suffer and Die?

The suffering and death of Jesus was the consequence of His radical Incarnation and insertion into the whole human condition, and of His deep desire to transform that human condition according to the mind of a God of mercy.

Since my childhood, right through my seminary formation in the 1960s, and into my faith formation as priest and religious, the way I understood the suffering of Jesus could be summed up thus: it was necessary–Jesus Christ had to die for my sins. By His suffering and death on the Cross, Jesus paid for my sins and the sins of all humankind, and only the suffering and death of Jesus could make “satisfaction” for all this–but, is this the way we should understand Jesus and His suffering?

Scholars have been drawn to a treatise by Anselm, the 11th century Archbishop of Canterbury, titled “Why God became Man.” Anselm’s understanding seemed to be that God was offended in an infinite way by the sins of humankind and this required atonement or satisfaction.

These offences could only be made up for and satisfied by the sacrifice of someone who was equal in dignity to God. Since Jesus was both human and the Son of God, He was able to offer Himself on the Cross and, in this way, “atone” for the sins of all. So, by dying on the Cross, Jesus, even though He is without sin, makes “satisfaction” for sinners of all times. That is how all are saved and redeemed.

The Merciful Redeemer
The Jewish Scriptures and the teachings of Jesus reveal a God of infinite compassion, mercy and forgiveness. If this is so, then why would “someone” have to suffer crucifixion and die in order for the sins and offences of humankind to be forgiven?

Reading through the Old Testament, it is clear: God is the merciful and compassionate redeemer of humankind and all creation. This is a God who “gathers the lambs in his arms,” (Isaiah 40: 11) who cares for the stranger, the orphan and the widow (cf. Deuteronomy 27: 19), and even for the two sparrows sold for a penny (Matthew 10: 29–31), a God who in Jesus enters into every pain people experience, e.g. the widow of Nain (Luke 7: 13). In Exodus, Moses encounters God on Mount Sinai, a God who proclaims: “Yahweh, Yahweh, a God of tenderness and compassion, slow to anger, rich in kindness and faithfulness.” (34: 6)

It was because Jesus proclaimed this God to the people and religious leaders, and because of the choices or options He took in faithfulness to this God of love and mercy, that His life would inevitably lead to the mystery of the Cross and death.

He brought the Good News to everyone, but all He said and did seriously questioned the political and religious power structures and systems, and the way laws were interpreted and applied to people. His word and life were a clear contradiction of the ways people were dehumanised by the prevailing power systems. In the end, the suffering and death of Jesus was the consequence of His radical Incarnation and insertion into the whole human condition which includes death, and of His deep desire to transform that human condition according to the mind of a God of mercy.

An Oppressed People
Reading through the Gospels, one can see how often Jesus suffered in different ways, even to the extent of feeling abandoned at the very moment of His greatest weakness: “My God, my God, why have you abandoned me?” (Mark 15: 34)

One also needs to interpret the life and sufferings of Jesus in the context of His “signs of the times”. The context of His birth, life and death was one of great violence and anger in that society. The citizens of His time were an oppressed people, abused and excluded. As a result, their anger and bitterness against the Roman oppressors, Herod and his sons, and the whole ruling class was ever present.

In the third chapter of Mark’s Gospel, we read how the Pharisees went out to plot with the Herodians on how to “destroy” Jesus (Mark 3: 4)–all because Jesus healed a man with a withered hand on the Sabbath.

Jesus could not abide with the systems in that society which dehumanised and excluded the poor and the outcasts from the possibility of healing and new life. Even in His hometown, His people were full of anger against Him and wanted to throw Him off a cliff–but He just seemed to “walk through them” without any hint of the violence they wanted to perpetrate against Him. (Luke 4: 28–30)

Radical Nonviolence
The response of Jesus to this violent society was firstly, to give witness to the truth that there is no violence at all in God, rather mercy and forgiveness, and to offer His people an alternative to this violence both by His preaching and the witness of His life. The witness He gave was to build an inclusive community by consciously opting for nonviolence and love, even love of one’s enemies, as a way of life.

Jesus articulated this vision in the Sermon on the Mount (Matthew 5: 39–49)–a core teaching. The three examples are a call to maintain personal dignity in responding creatively and non-violently to abuse, e.g. offering the other cheek when one receives a dismissive backhanded slap across the right cheek. It involves an option to not only resist and work especially against the systems of injustice which oppress the little ones of the world, but also to resist without allowing ourselves to be pushed towards opting for the violence one wants to resist.

It is an active nonviolence which includes everyone in the quest for a peace that can be sustained for the common good of all, and the healing of a broken people and creation.

A Sign Of God’s Love
This theme of nonviolence as an essential characteristic of Jesus’ witness, preaching and life, is so important for the violent world in which we live, and has been the subject of much research. In fact, nonviolence, respectful encounter and dialogue are the only way forward if we hope for a different kind of world, and this includes the violence being done on a daily basis to our creation.

Such a radical call as in the Sermon on the Mount will have consequences; namely, the real possibility of personal rejection, even leading to suffering, symbolised by Jesus setting out for Jerusalem, the seat of power that oppressed His people, in spite of sensing the evil that awaited Him.

For Jesus, that journey did end in crucifixion–a consequence that began with His Incarnation into the human condition and ended on Calvary. Except that, it did not end there! The human condition, its sinfulness and brokenness, which Jesus took on fully was redeemed and transformed by a life that ended in death and Resurrection, all of which was fundamentally a sign of God’s love, forgiveness and mercy for all.

Jesus died on the Cross because He was radically one with all human beings and the whole human condition including death, and because He proclaimed and lived an alternative that challenged the unjust power systems of the time.

So, instead of the “satisfaction” theory, perhaps it would be helpful to imagine salvationand redemption as the way God walks with people whom God truly loves. Jesus is Emmanuel, “God with us,” or, in the words of John, “the Word (who) was made flesh, and dwelt among us.”

Jesus chose to be one with every form of human suffering in our world including death, and by the very fact that He died but rose again, we the People of God know in faith that suffering and death are not the end but merely the beginning of a whole new experience of life in all its richness and meaning.

We as human beings are called to enable that mystery of redemption in Jesus to continue to transform every form of human suffering and dying, including the “dying” of the creation, through the choices we make in life.

Why did Jesus suffer and die? Was this to “satisfy” a God who had been offended by sin and who required fitting reparation? Or was it the consequence of sharing radically in our entire human journey so that what Jesus proclaimed and lived would enable everyone to experience the forgiveness and healing grace freely offered by a compassionate God—because our God of mercy desires that we and all creation may “have life and life to the full?” (John 10: 10).

The Special Synod for the Amazon wishes to contribute to the new ways of building up the Church and an integral ecology. The objective is to create conditions that allow the populations that inhabit…

COVID-19 and the Psychological Life of Children

The psychological life of children is being affected with the prolonged lockdowns due to COVID-19 pandemic. Children are obliged to stay at home and take online classes, depriving them of physical…