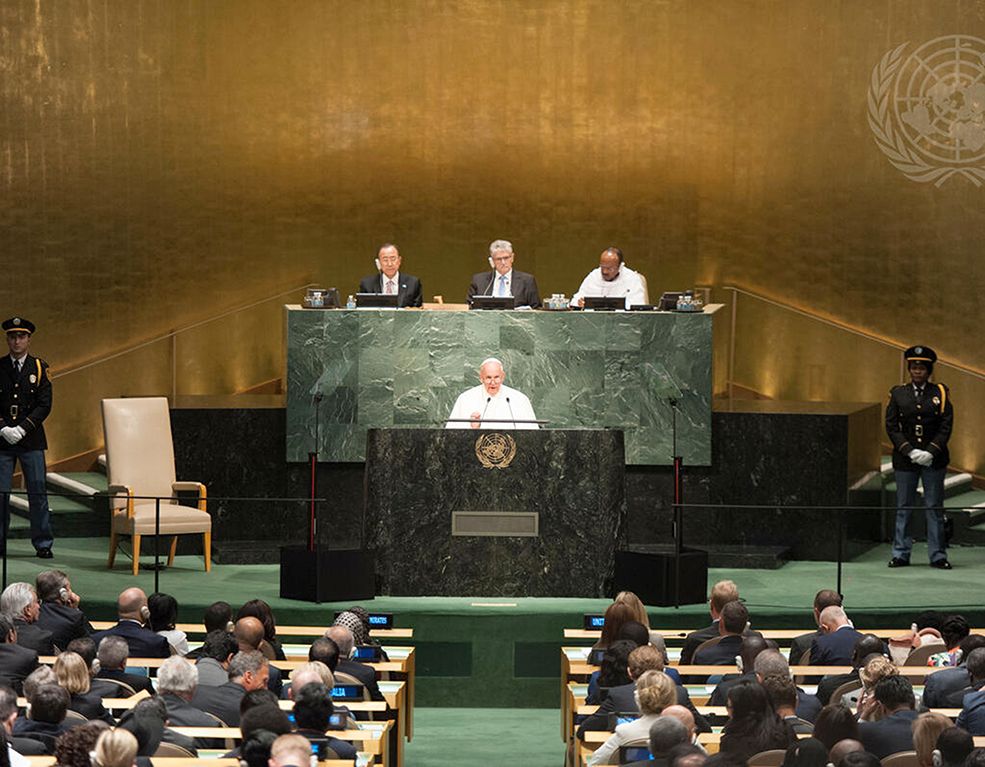 For A Better Kind Of Politics

By Peter Knox | Society of Jesus

In his last encyclical, Pope Francis calls for a politics characterized by fraternity and social friendship. He stresses the need for a global judicial, political and economic order that can increase and give direction to international co-operation for the development of all peoples in solidarity.

Despite the deep crisis that the United Nations is going through and in spite of its many failed interventions, the Pope asks that this international institution be “reformed,” to prevent it from being de-legitimized, so that “it can give real concreteness to the concept of the family of nations.”

As a leading moral voice in the world of today, the Pope has had the opportunity to speak to the United Nations on several occasions. This is evangelization of the world par excellence. I remember his visit to the UN Office in Nairobi (UNON) in 2015. The UNON houses the world headquarters of UN-Habitat and UN Environmental Program.

Moral Boost
Some months after he had published his encyclical Laudato Si’– On Care For Our Common Home, and two weeks before the Paris Summit on global climate change, Pope Francis gave the leaders of the world a ‘moral boost’ that galvanized the minds of many of them to support the Paris Accord to combat global warming.

This vision of Christians working side-by-side with, and for international organizations is expressed in Gaudium et Spes, the famous Pastoral Constitution on the Church in the Modern World of the Second Vatican Council that was held on 7th December 1965.

The Council saw that the Church is part of the world, and that we Christians cannot plough our own furrow separate from all the brothers and sisters who make up our societies around the world. As we are not isolated from the grave concerns of the world, so we need to be part of the solutions.

Since the foundation of the UN in 1945, the Holy See (the Catholic Church) has always had observer status at the organization and has permanent diplomatic missions at the headquarters of many of its programs, in Rome, Geneva, New York, Nairobi, among others. In addition, thousands of local Catholic organizations around the world partner with UN programs for the benefit of those most in need of shelter, refuge, food, education, healthcare and peace.

I imagine that many of us were happy that the Nobel Committee has recognized the UN World Food Program for combatting hunger and saving the lives of millions of people, by awarding it the Nobel Peace Prize for 2020.

The most threatening diseases of our time are not COVID-19 and AIDS, but isolationism and individualism. Cutting oneself off from others and not caring about the social consequences of one’s actions bring suffering to everybody.

The Second Vatican Council bishops would be horrified by countries that want to go it alone, aspiring to be independent from their neighbors. Unilateral withdrawal from international treaties, such as the Paris Accord on the climate, or from the European Union, are completely contrary to the spirit of Vatican II and of Fratelli Tutti.

Our Common Home
Everybody loses when the solidarity of the whole human race is weakened. Ultimately, the planet, our common home, also suffers when human beings are not working together in harmony the good of everyone. As this applies on an international scale, it is also relevant for us in our families, schools, communities and villages. Withdrawal and separation are not the way to deal with conflicts and disagreements. Rather, we should engage with even greater commitment to overcome obstacles

Of course, some people are highly critical of the UN, and ask what the organization has achieved over the 75 years of its existence since the end of the Second World War. American President Trump has labelled the organization a “bloated bureaucracy”–and no doubt, it is–just like the African Union and European Union, and many governments.

Other opponents point out how the UN lacked the political will to prevent the start of the Rwandan genocide in 1994. Others still accuse UN forces of not preventing the massacre of thousands of Bosnians in Srebrenica. In 1995, there was a conflict of ideologies between the UN’s World Conference on Women and the Catholic Church regarding their respective positions on women’s health and the use of contraception and abortion.

Yet, Pope Francis says that the Organization should not be “delegitimized, since its problems and shortcomings are capable of being jointly addressed and resolved.” (FT, n. 173) Like any other human organization, the UN has its limitations and failures, and some of these are unforgiveable. But that is not a strong enough reason to turn one’s back on an organization that is trying to foster human dignity, the fraternity of nations and peoples, and the health of the planet.

Christians do not have the only insight or the final word in every issue. There is always more than one face to any problem. In fact, Pope Francis writes: “The image of a polyhedron can represent a society where differences co-exist, complementing, enriching and reciprocally illuminating one another, even amid disagreements and reservations. Each of us can learn something from others.” (FT, n. 215)

As we read Fratelli Tutti, we see Pope Francis sharing the inspiration of St. Francis of Assisi: that we might have a universal brotherhood and sisterhood. On the international scale, this is expressed in the relations between states and at the level of the UN. On the personal scale, our fraternity should extend to people of other religions, outlooks, sexualities, ethnic groups, languages, among others–but do we also extend our hand of friendship to our planet, and to the many living creatures, plants and animals, that share our home, and make it what it is?