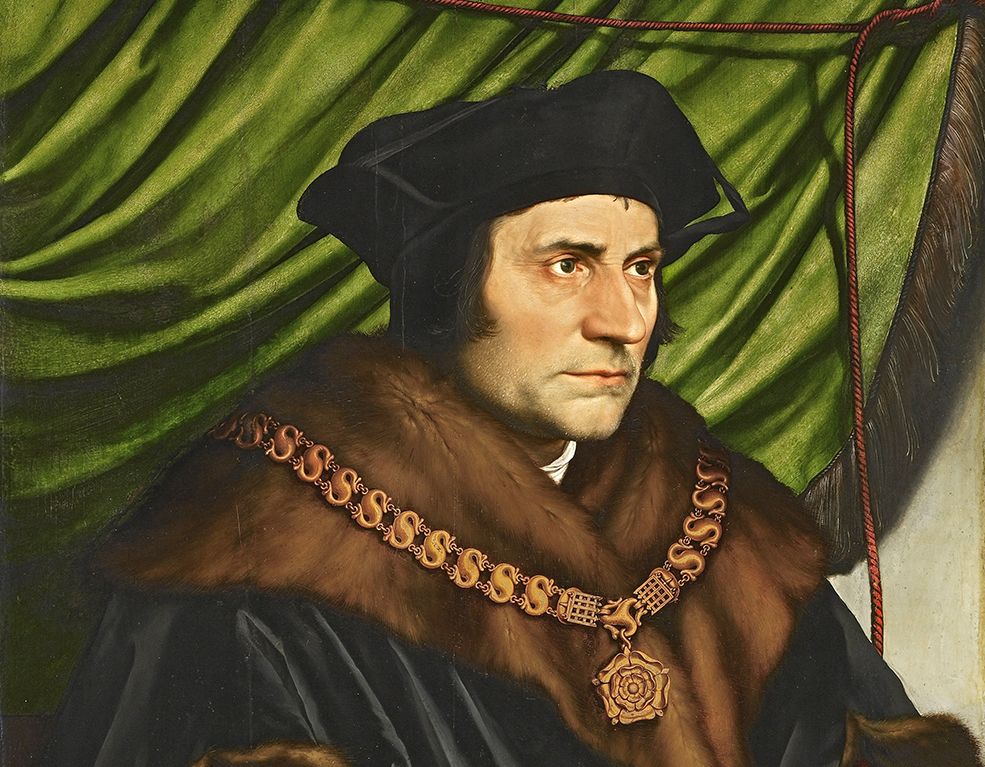 How did Thomas More shift from being a highly regarded individual by King Henry VII to being beheaded in 1535? Thomas More was born on 7th February 1478 as the second child of Sir John More and Agnes Graunger’s six children.

Sir John More–an academic, an intellectual, and a high-ranking lawyer who later became a judge– sent his son to St. Anthony’s, the top London school. Sir More then procured a place for his son in the household of John Morton, the Archbishop of Canterbury and Cardinal, who as Lord Chancellor was one of the most powerful men in England in the reign of Henry VII.

The Cardinal was highly impressed by young Thomas, enough to nominate him for a place at Oxford University. There he spent two years receiving a classical education before training as a lawyer.

It seemed as if young Thomas More was set to follow in his father’s footsteps, but from 1503 to 1504 he lived near a Carthusian monastery. He regularly participated in the monks’ spiritual exercises and thought very seriously about becoming a monk.

Monk or Lawyer?
He chose neither, and in 1504, he stood for election to Parliament. He would, however, put his legal training to good use in the service of parliament and King Henry VIII who came to the throne in 1509.

He also continued to follow the disciplines he had learned with the Carthusians throughout his life. He was not just a parliamentarian, however. His classical training stood him in good stead. He and Erasmus worked together on translations of Lucian, the first century Assyrian satirist and rhetorician.

More considered himself sufficiently stable in life at this time, thus setting up his own household and marrying Jane Colt, whom he taught music and literature, in 1505.

Sadly, the marriage was short. Jane gave birth to four children–Margaret, Elizabeth, Cicely and John–and died in 1511. No doubt to secure a stable home for his children, he had married a widow, Alice Middleton, to run the house.

They had no children, but he treated Alice’s daughter from her first marriage as his own and became the guardian to two other girls, suggesting that he was not only a clever and pious man, but also one with a large heart. And he educated all these children in the classics, despite the gender bias that usually excluded girls from education at that time.

Politician And Writer
A member of parliament from 1504, his standing as a trustworthy and successful politician was forged during that decade. The new king clearly valued him, appointing him to the important role of Privy Counsellor in 1514.

He was sent on vital foreign diplomatic missions with the Archbishop of Canterbury (the country’s highest cleric), and from 1521 More was appointed to a succession of top jobs–Under-treasurer at the Exchequer, Speaker of the House of Commons, and in 1525, Chancellor of the Duchy of Lancaster, responsible for law and order in the north of England. By the end of the decade, he was Lord Chancellor, England’s highest political post.

He was also achieving success as a writer. His History of King Richard III, a first in terms of historical biography, influenced writers in coming centuries. Concurrently, he wrote Utopia in 1516. This fictional tale of an island paradise, narrated by a traveller from Europe who had stayed with the island’s people for some time, not only gives us the word ‘Utopia’ to describe unattainable perfection, but also offers an insight into More’s mind set.

The life he describes in great detail has been categorised as ‘communist,’ perhaps because it talks of food security achieved by farming cooperatively and a collective work force that routinely alternates between urban and agricultural labor. Rulers are elected, and consumerism is non-existent. Personal wealth, greed, and materialism are all absent from Utopia.

Electing a prince rather than following a hereditary line could well have irked a monarch not long having taken over from his father as a ‘divine right,’ but it was not these supposedly fictional views expressed in Utopia that halted the previously unstoppable success of Sir Thomas More.

It was trouble over a woman, over religion, and over the power chess game in Europe that lost More his place at Henry VIII’s side–and his head.

The Reformation
At the start of the Reformation movement, Martin Luther was not alone in wanting to bring the Church into the modernity of the 16th century. Doctrines were questioned and some practices interrogated. Sir Thomas More saw such proposed reform as heresy and “a call to war.”

He prevented Luther’s books from entering England, put suspected Protestants under investigation, and had those carrying translated bibles (particularly William Tyndale’s translation, which More believed was heretical), arrested and tried–often resulting in the horrific punishments of the day. Intriguingly, his fictional Utopian which disagreed with the country’s orthodox religion was merely banished.

There was savage persecution of “heretics” and during his chancellorship, six people were burned at the stake for heresy. But More claimed in his Apology, written in 1533, that he only applied corporal punishment to two heretics: a child caned in front of his family for heresy regarding the Eucharist, and a “feeble-minded” man whipped for disrupting prayers.

Such punishments are not acceptable in the 21st century, but compared to the accusations made against More of much greater crimes against humanity, these admissions are mild.

Why did Henry turn from the king rebuking Luther to the monarch destroying his former trusted advisor? That, of course, is where the woman comes into the picture. Henry did not directly succeed his father. His older brother, Arthur, was first in line and at the age of 14, he was married to Catherine of Aragon, the daughter of an Iberian king.

Just 20 weeks later, Arthur died, and on the death of Henry VII, Henry ascended to the throne and married his dead brother’s widow. Catherine, however, did not produce the desired heir and a young courtier by the name of Anne Boleyn caught Henry’s eye.

Henry VIII’s Marriage Annulment
The man of singular virtue, Sir Thomas More, did not support Henry in his bid to have the Pope annul his marriage to Catherine, even though Henry used biblical “evidence” to justify his ploy. Nor, when Pope Leo X refused to grant Henry’s wishes, would More accede to the king’s attempts to separate the Church in England from Rome.

No doubt More had long been aware of Henry’s many extra-marital affairs. This latest attempt of the king to have his own way must have been the final straw. In fictional Utopia, More had written: “They punish severely those that defile the marriage bed; if both parties are married they are divorced, and the injured persons may marry one another, or whom they please, but the adulterer and the adulteress are condemned to slavery.”

In 1532, More resigned from the House of Commons, citing poor health. The real reason, however, was his disapproval of Henry’s disregard of the laws of the Church and his divorce from Catherine. Henry married Anne Boleyn on 25 January 1533 amidst a storm of political and religious reactions throughout Europe. More did not attend Anne’s coronation that June, angering the king further.

Retribution was sure to follow. In February 1534, More was accused of being complicit with an alleged witch, Elizabeth Barton, who publicly opposed Henry’s break with Rome. In April 1534, More refused to swear to Henry’s Act of Succession and the Oath of Supremacy.

This amounted to More essentially refusing to accept the king as head of the Church in England, which More believed belittled the power of the pope. In fact, it saw the establishment of the Church of England–“protestant” politically if not spiritually.

Martyr For Integrity
More was sent to the Tower of London on 17 April 1534, and was found guilty of treason. He assured his family that he was ready for what inevitably followed: he was beheaded on 6 July 1535. His final words on the scaffold were, “The King’s good servant, but God’s first.” Anne Boleyn was beheaded on 19 May 1536 and Henry would marry another four wives.

The Catholic Church honoured More three centuries later, when he was beatified. He was canonized in 1935. The Church of England named him a “Reformation martyr”. An honorable man fit to intercede on behalf of today’s politicians and statesmen–they would do well to remember his “singular virtue.”

To be a missionary in the Muslim world is to care for the Christian minority and be witnesses to the Muslims through health care and education. Mission for the author is not about proselytising, but…