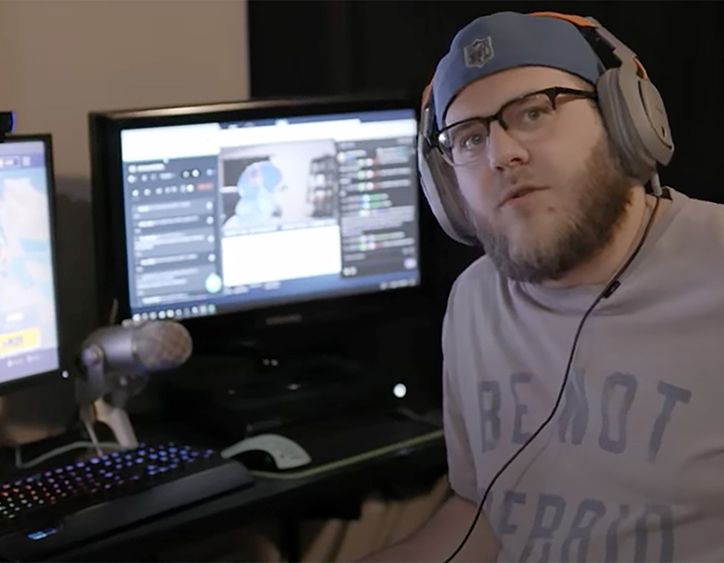 Millions of children of all ages follow streamers on platforms like Twitch, where talented gamers show off their skills and engage with viewers through chat. While some might question the value of gaming communities, one streamer identified their enormous potential for evangelization.

Jonathan Blevins runs the Twitch channel BeardedBlevins, where he and several like-minded streamers are injecting Catholic perspective into gaming culture by trying to find “the good in gaming.” Using his skills as a father and a former youth minister, Jonathan’s family-friendly streams are wholesome and lighthearted; everything a “game” is supposed to be.

In the last few decades, the video game industry has changed a lot. What started as an ultra-social activity, where entire towns of children played together at local arcades, games became a more solitary endeavor with the advent of home consoles.

These convenient systems made gaming easier and more prevalent, but even though companies like Microsoft and Sony eventually began offering online play, the players missed the feeling of being part of a community.

This is one reason why game streaming platforms like Twitch have become so popular. It harkens back to a time when younger siblings would sit around the TV to watch their older brother conquer a map they couldn’t, or when dozens of friends would gather around as three or four of their number competed in tiny split-screen boxes. The medium, while open to trolls and toxic players, lends itself well to engagement and the promotion of a supportive community.

A supportive community is just what Jonathan has built on his Twitch channel, BeardedBlevins, through a welcoming atmosphere and magnetic joy. Jonathan draws in viewers with a quick wit, a humble faith, and of course exceptional skills behind the “sticks” (gamer-speak for the controller).

We found Jonathan’s approach to evangelization to be like a refreshing breath of air after diving underwater. He makes overtly Catholic references from time to time and his streams usually end with Blevins praying for those who tuned in, but the real evangelism comes from the example Blevins sets.

Rather than preaching outright to the kids who tuned in, Jonathan shows them how one can live in the secular world while consistently keeping a Catholic perspective and gravitating towards the values of the faith. Blevins’ laid-back style casually tosses out pearls of wisdom in a manner that teaches without the viewer even knowing they have learned.

Jonathan Blevins was kind enough to answer Aleteia’s questions about evangelizing through gaming.

Q.: Where did the idea for the BeardedBlevins come from? What led you to seek “the good in gaming”?
A.: My wife and I were hosting weekly hospitality nights in 2018/19 where we would invite everyone and anyone to our house for a meal and for fellowship. One of the friends that I made during these events was in marketing and we were discussing the idea of me streaming. I decided that night that I would try it out the following week and he was adamant that I had some marketing materials and a consistent “brand” on all of my social media pages. We came up with BeardedBlevins that night and I changed all of my handles immediately and announced it the next day. So I aimed to bring good to gaming and to show people that great things can happen when Christ is at the center.

Q.: How do viewers react when you discuss faith in a video game setting? What level of engagement have you drawn?
A.: We have seen all kinds of reactions but usually it is met with fascination and curiosity as well as gratitude. We aren’t hosting teaching sessions and lecturing people. Faith comes up naturally after viewers have already begun to trust us because we are friendly and loving. Then when they inevitably ask questions about faith or life in general, they are very open to whatever we have to say. The number one comment we get from people is “wow, I have never heard someone share faith in such a loving, non-confrontational way.”

Q.: Which video games would you say have the greatest potential to start a conversation on faith? Which is your favorite to stream and why?
A.: Any game that isn’t wildly gory or using foul language can be a vehicle for conversation. We choose to play Fortnite because it allows us to play as fast or slow as we want while being able to read the chat at a fast pace and keep up with the conversation. It is also super fun and entertaining game to watch in general.

Q.: Your streamers are very laid back. What are the best ways to keep your cool when competitive shooters, like Fortnite, get heated?
A.: Competition is one of the biggest reasons why anyone enjoys video games. We want to work together with our friends/teammates to accomplish a goal. Winning is fun. But it is just a game. It is not easy for me to forget that. I don’t think I have ever “raged” on stream unless it was for a meme. I think it is important to show that you can be competitive, try to win, and keep your cool when things don’t go your way.

Q.: Your channels discuss your Catholic faith, but I’ve also seen talk of sports, spicy food challenges, and group discussions on world events. How do you strike a balance between secular and religious topics and how do you feel this helps you evangelize your viewers?
A.: To use one of the biggest buzzwords in the Catholic world right now … Authenticity. We are just ourselves. I have always been me on stream and that is all I know how to be. I love sports, food, bourbon, hot takes, and my Catholic faith. For some reason people like to hang out with me and care what I have to say and so the ones who aren’t super into the faith part endure it or have had conversions throughout it … and the ones who are there for the faith aspect alone get to see that you don’t have to talk about Jesus every second of every day to live out your faith. Everything we do can have God at the center if we are entering into it with the right disposition of our hearts.

Q.: Have you ever prayed to a saint to ask for help with a game? Which saint do you think would be the best gamer?
A.: I have never prayed to win a video game or to do well. I often ask St. Francis of Assisi for his intercession before streaming. I think Thomas Aquinas would have been the best gamer of all time but I am thankful that he didn’t have video games to distract him from the clear call he had from God.  Aleteia

To be an authentic peacemaker, inspired by the Gospel and a nonviolent approach, requires special skills. Archbishop Thomas Menamparampil shares a few lessons that he has learned working for peace in…

A Call to Walk Together

Pope Francis inaugurated the Synod in October last year. Dioceses around the world followed suit. It is a new experience because this Synod is held in a “way new,” as it is intended to be carried out…

Bishops have been at the forefront in attempting to address environmental issues plaguing the Philippines and the planet.