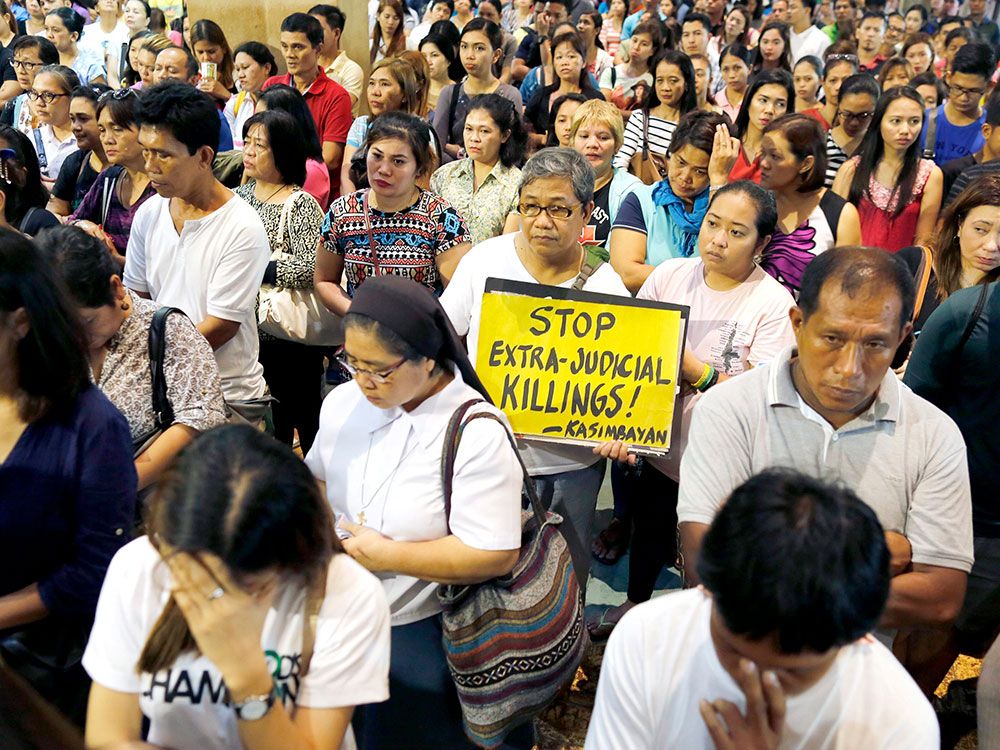 Speaker Pantaleon Alvarez and Capiz Rep. Fredenil Castro want to bring back the death penalty in the Philippines as a deterrent to crime. It can be said that the death penalty is already effectively and practically in force daily. As many as ten suspects are killed every day in the war on illegal drugs.

Some of the drug users and dealers suspects are killed in what is said to be police shoot-outs. Others are the work of vigilante death squads. They bind the hands and feet of the victims, gag them with tape and shoot them and leave them in a public place with a crude sign saying: “I am a pusher.” With the sign left on the body, it is presumed that the victim was a drug pusher. It is another case of a false accusation, a wrongful killing.

The suspects are lined up on lists prepared by the local barangay officials and given to the police. In the gated communities of the rich, the officials are not cooperating with the police demands for a list of suspects. Many end up dead and most of them are poor, small-time “suspected” drug users. The big drug lords have yet to fall.

The normal way to apprehend a suspect would be to investigate, get evidence of illegal drug possession then arrest the suspects and charge them in court by the prosecutor. This is being bypassed at present. The daily death penalty is setting a culture of fear and death where impunity is the norm. There is nothing to prevent anybody from accusing their enemy to settle a score, to steal a wife or girlfriend or to get rid of a political or business rival by marking them for death by denouncing them to the police as drug dealers.

The legislators are determined to bring back the death penalty. As proposed in House Bill No. 1 by Speaker Alvarez and Rep. Castro, the law will provide lethal injection as the method of the government to carry out the death penalty. It would be given to those convicted of human trafficking, illegal recruitment, plunder, treason, parricide, infanticide, rape, qualified piracy, bribery, kidnapping, illegal detention, robbery with violence against or intimidation of persons, car theft, destructive arson, terrorism and drug-related cases.

What is very clear in the Philippine judicial system is that it will be the poor, who cannot afford a lawyer, who will likely get convicted. The rich and wealthy, if ever charged in court, will be able to have brilliant lawyers to get them acquitted. Studies show the death penalty is no deterrent at all.

When the death penalty was active in the Philippines in past years, children, repeatedly raped by their father, were very reluctant to pursue a case in court. They feared they would be responsible for putting their own father to death and have to endure the scorn and rejection of her family.

The most plausible argument against the death penalty is the clear danger of a false accusation and a false and wrong conviction. The death penalty is final and, if the convicted is found to have been innocent, there is no way to correct the mistake. There is no resurrection from the grave in this life.

In the United States, hundreds of men convicted wrongly and received the death penalty have been consequently proven innocent and released after many years on death row. The convictions were overturned by new DNA evidence that proved the convicted was, in fact, innocent.

The Philippine judicial system is not superior to that of the United States with all its faults and weaknesses. Nor can it rely on DNA forensic evidence to prove the innocence or guilt of a suspect. That is, if ever he gets his day in court. Nowadays, it seems the court process is too cumbersome and the delivery of the daily death penalty is sufficient.

For a “Grammar” of Care

This is the right time to unleash the Catholic Church’s “secret weapon.” A nonviolent weapon with tremendous power to neutralize evil forces, the Catholic Social Teaching is a priceless tool to help…

Children are the worst affected by the growing inequality in the Philippines. They are the first victims of an economy dominated by a tiny rich elite that owns as much as 70 percent of the national…

Disarming our hearts, disarming the world

Our world is awash with both conventional and nuclear weapons. It is one of the largest businesses in the planet. Let us urge our national and international leaders to work toward building a world…