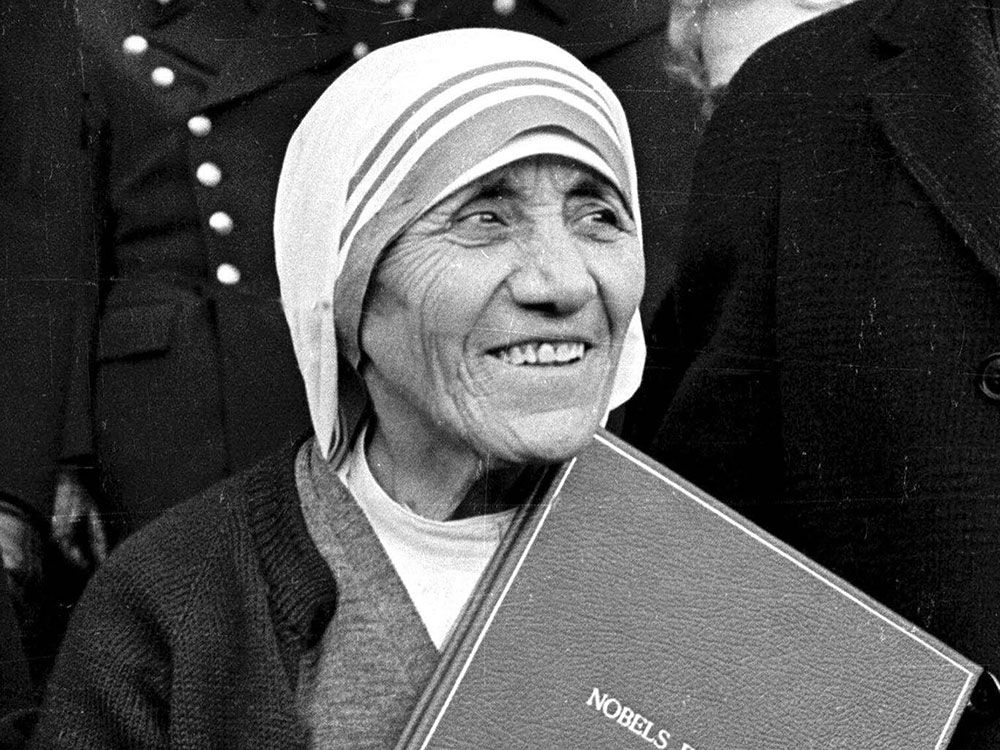 A mystic in action

Most impressive in Mother Teresa's spiritual profile, who was declared saint on September 4, is her visible sense of compassion, selfless attention to others, bubbling enthusiasm, and unfailing resilience in the face of difficulties – an example to emulate in our days.

As a young seminarian, I first met Mother Teresa in 1958 at Bandel Church. Her work was about ten years old and was hardly known beyond the neighborhood. Those who knew her closely spoke of an ‘impossible’ measure of generosity implied in the new initiative. She was young, quick on her feet, and walked to the church or around the Marian Shrine with a group of young Sisters at an amazing pace. Such an external expression of dynamism was combined with spiritual depth, a profound sense of vocation, and contagious joy.

As a bishop, the first time I met her was when I was travelling from Mumbai to Kolkata (Calcutta). All of a sudden, I noticed Mother Teresa sitting a few seats ahead of me. It was a late flight and when we reached Kolkata it was past midnight. She asked me whether someone was waiting for me. If not, she said, she would take me to the place I was intending to stay. I thanked her for the offer but insisted that I knew Kolkata well and that she should not trouble herself at so late an hour to help me but she would have none of that. Her Sisters had been waiting for her with a jeep. She put me in the front seat, and the Nobel Prize winner and her companions sat sideways like little girls on the back seat of the rickety old jeep.

We missed the road, wandered round the city and, finally, ploughing through many winding lanes, reached the religious house where I was going to stay. Even after I got down from the jeep, Mother would not move away until the gatekeeper opened the gate and recognized me. As I thanked her, I asked her to pray for me. And she replied “I will” in a way that I can never forget.

I have met with Mother Teresa on several other occasions, discussed work with her, travelled in her company, and opened several convents for her Sisters in the dioceses where I worked.

It was on September 10, 1946, while travelling to Darjeeling on the little train, that young Teresa of the Loreto Sisters heard an inner voice asking her to come out into the streets of Kolkata and look after the poorest of the poor. Industrialization had brought wealth to the city but had thrust a large number of people into degrading conditions. She had only a few cents in her pocket when she ventured on that mighty undertaking which was to stun the world. She accomplished the unbelievable. Though frail, she was vibrant and exuded energy all the time.

Mother Teresa never ran short of ideas and always found fresh energies within herself – and from the obscure slums of Kolkata, she won the attention of the world. Jyoti Basu, the Communist Chief Minister of West Bengal, was her main supporter in her early days. Volunteers came from the ends of the earth to help, all too happy to work with her.

It was a curious combination of things: a communist leader helping a fervent Catholic missionary, and a large number of volunteers, many of them indifferent to the faith, finding joy in working with a fervent believer. Several Hindu friends, too, extended generous assistance to the emerging heroine of Kolkata’s streets. Soon enough, she was meeting prime ministers and presidents and addressing international audiences. Her message was always the same: love the poor, show compassion. She related with everyone as she did with Kolkata’s poor. For her, all were equal. She had no other topic for conversation but the needs of the poor.

The dignity of the person

If Mother Teresa has a message for our times, it is precisely about the dignity and worth of the human person, no matter in what fragility the person is clothed. For her, it was not a loss of time waiting on the blind, the deaf, the dumb or lepers, attending to their basic needs or taking part in homely events in their company.

She saw the ‘glory of God’ shining through the piercing eyes of dying individuals. Whether a person was in rags, covered with filth or worms, smelling at the sores, or showing an extremely bad mood, that individual was a human being, made in the image of God. For Mother Teresa and her Sisters, that person was Jesus Himself. She was convinced that a human being deserved our full attention, love, respect and care, whether he/she was in the womb, slum, jail, lying terminally sick, or at the moment of death. Mother Teresa could serenely speak of a “beautiful death” any person would have when dying under their care: full of dignity, surrounded by love. She considered it a privilege to be of assistance at such a moment.

Mother Teresa recognized the seed of greatness in every human being in every human condition. Each person is unique, and every individual uniquely precious. She did not argue the point but established the truth in action, in life. That was her style. In her own manner of communicating, she was eloquent beyond description.

If the worth of the individual is so great, that “life” must be equally precious. Human life is not a commodity that we can deal with according to changing moods, attitudes, and ideological trends. Lack of love for life is lack of love for humanity, whether the person concerned is in the womb, the cradle, the school, society, trapped in debt, hated, dubbed a terrorist or terminally ill. The value of one’s life is not measured in utilitarian terms.

A person in a coma is not a piece of vegetable. When we speak about his/her personhood, we are referring to something more transcendentally truthful, something which artists and poets have imagined, sages and saints have experienced and described. Loving him/her is not love wasted if only we understand love – not as a passing moment of excitement but a profound experience of the soul, a door into a mystery.

The world does not become a better place when a baby in the womb is aborted or a person in his weak moments is eliminated, through euthanasia, but when they experience love from those who surround them.

In today’s contexts of violence, Mother Teresa has a message. Lifting a street victim in her arms, she cries out to the world “Life is precious.” To those with grievances, to those fighting for “just causes,” she would say: “Stop being a victim and start being responsible.” We make ourselves victims of parental mistreatment, educational mishandling, social imbalances, historic injuries, personal humiliations. We blame our genes, DNA, ancestors, authorities, powers that be, the type of education we were given. Mother Teresa’s message to everyone is: “Be an adult today, and take on responsibility for the rest of humanity.” That, she did.

The sense of the sacred

Mother Teresa had the courage to bring the lost sense of the sacred back into a world that was seeking to walk away from it. When we ignore the inner stuff that we call the soul, it makes itself felt: physical symptoms of inner uncertainties, spiritual anguish, anxiety, a sense of emptiness and of general unease. Heroism becomes an unintelligible value in a softening society; the spirit of venture ceases to exist.

When the human being is reduced to becoming a consuming machine, there is no room for genuine romance, poetry or mystery in life; one feels ill at ease in the world of the serious, the profound, the universal, the spiritual. There is no place for rewarding relationships. Why set yourself free from slavery to Pharaoh or to political or economic oppressors, merely to enslave yourself to habits that make you less of a person? Why clamor for education and enlightenment for all when you have made a compromise with a blindness that limits your horizon? Why press for human rights when daily you renounce your right to be a better person and a generous agent in human society?

Mother Teresa confronts you today with a few more challenges. She says: "Question your life of compromise, dialogue with the challenges you face, keep close to pain and those who have to live with it. Listen to the message that human agonies have for you. You may be surprised to find", as she did, "that pain is a wonderful teacher, that an inner agony can be a gift. "

In fact, the pains she suffered were not merely linked with the hardships of her ministry but also with the strains of her spiritual journey in search of God who seemed to be constantly absent. While she was perfectly sure that the work she was doing was God-mandated, He Himself seemed to keep a distance, leaving this much-admired nun in deep inner distress. St. John of the Cross calls this experience the “dark night of the soul.” Mother Teresa struggled with this deep spiritual pain of inner emptiness for years. We would have known nothing of it if her diary had not been preserved against her own will.

Such an experience can help you to unwrap your cozy little lives and give you a chance to know the secrets of your soul and firmly hold that God is near. Stop having recourse to quick-fix solutions and palliative cures for your anxieties. Attempt rather to get closer to what seems to defy you until your ability to take on challenges has grown. It will make more meaning when you do it for Jesus and for the poorest. That would be the substance of Mother Teresa’s whisper to you today.

Conscience of the world

Now a few words of criticism. The chief criticism I have heard of Mother Teresa is that she was what she was, not what others wanted her to be. For example, she has been accused of associating with the high and mighty, not denouncing those who headed unfair structures, and even of accepting assistance from them. Indeed, she rejoiced that there were many who traced injustice to the roots. But she pleaded that her own mission was different, it was assisting humanity where it was most wounded.

President Bill Clinton frankly admitted that no one in modern times has stung the conscience of the world as Mother Teresa has done. Lao Tzu best summarizes what the great saint from the streets of Calcutta is: “The wise shine because they do not want to impress. They achieve great things because they do not look for recognition. Their wisdom is contained in what they are. They refuse to argue, so no one argues with them.” But their message convinces.

The Three Comings of Christ

Advent is the season when we prepare for the coming of Christ at Christmas. Christ comes in three ways. Christ did come in the past, Christ does come right now, and Christ will come in the future. Our…