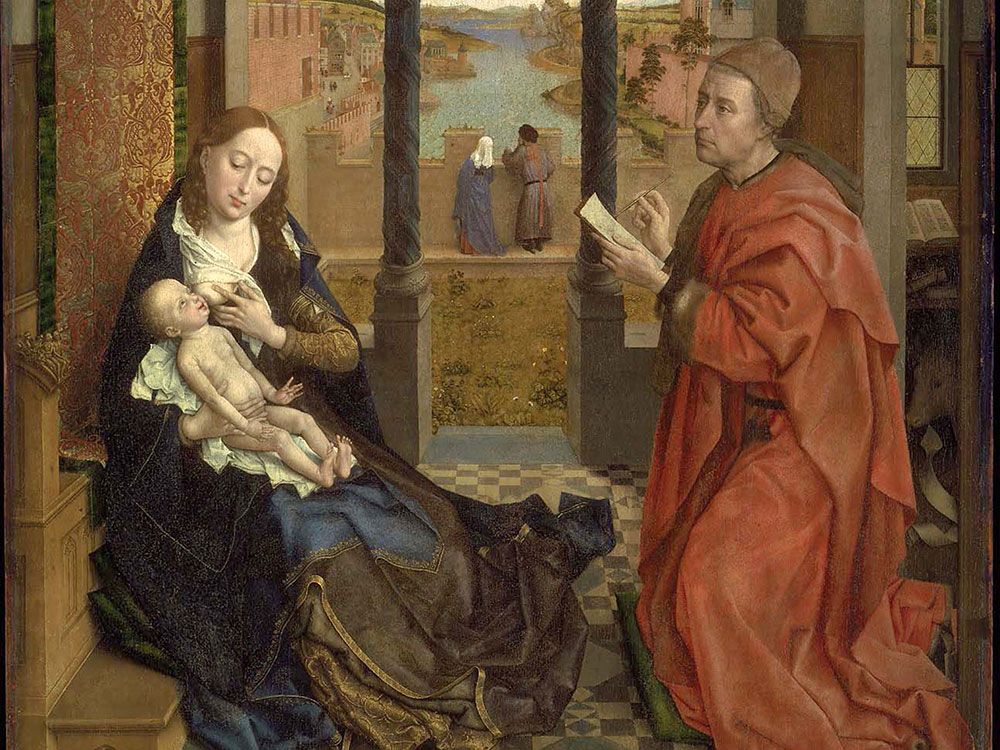 We do not have the account of Luke’s vocation but his diaphanous figure, as a disciple and missionary, appears in filigree in his two works: the Gospel and the Acts of the Apostles. A look at Luke’s profile can help us to live for the service of evangelizing and feeling the joy of the Gospel, which Pope Francis invites us to do.

According to tradition, Luke is originally from Syria (Antioch), of Greek culture, with pagan roots. He was a doctor by profession (“my dear friend Luke, the doctor”: Colossians 4:14). He was Paul’s collaborator (Philemon 1:24) from his second apostolic journey, around the year 49 (Acts 16:10). He remained loyal to Paul in the last years of his life before being martyred in Rome (2 Timothy 4:11). According to tradition, he was also a painter (he painted the first icon of the Virgin Mary).

These particular qualities outline a person who we like at first sight. But it is especially his human sensitivity and faith, coming through in his writing, that make him an attractive, inspiring, modern figure. Investigating Luke’s personality a little freely, I can spot some characteristics that would make an ideal identification for the “new evangelist.” I’ll choose four of them!...

One of the characteristics of the Gospel of Luke is happiness. If “gospel” is “happy news,” the first announcement (of the angel Gabriel to Zechariah) is a “gospel:” “He will be your joy and delight and many will rejoice…”(1:14). The same angel tells Mary: “'Rejoice, you who enjoy God's favor” (1:28). Mary’s Magnificat is an explosion of happiness (1:47). But “the great joy… to be shared by the whole people” is the birth of the Messiah (2:10).

All of Luke’s Gospel is an account of great sowing of happiness. With His new word, His prodigious actions, His proximity to everyone, Jesus awakens marvel and praise wherever He goes! The Gospel finishes saying that the apostles returned to Jerusalem “full of joy,” praising God (24:52-53).

The missionary, the evangelist, is above all a harbinger of happiness, the carrier of a message that warms the spirit, bringing hope back into our hearts and a smile to our faces. He must, therefore, be a happy person who takes his mission seriously, as a bringer of good news (Isaiah 40:9).

“The new evangelization is carried out with a smile, not with a frown,” the Cardinal of New York, Timothy Dolan, recently reminded the Pope and the College of Cardinals. And he recalled the appeal of the other Cardinal, John Wright, from his days as a student, in a Mass in St. Peter’s, given to the seminarians of the Ateneus Romanos: “Seminarians, do me a favor, for me and for the Church: when you walk through the streets of Rome, SMILE!”

It is what we often lack: A SMILE! It is not the “white collar” which should make the “new evangelist” stand out, but his big, open, frank and contagious smile!...

Singer of the goodness of God

Luke’s book is the “Gospel of Mercy.” Jesus came “to proclaim a year of favor from the Lord” (4:19). Salvation is now within the reach of everyone “and all humanity will see the salvation of God” (3:6) – An opportunity to take advantage, without delay, today. The word “today” is a “key word” in Luke’s Gospel, beginning with the birth of Jesus, then His inaugural speech at the synagogue in Nazareth and His meeting with Zacchaeus, until His penultimate word said on the Cross, said to the “good thief” (2:11; 4:21; 13:32; 19:9; 23:43). “…the poor, the crippled, the blind and the lame” are invited to the great banquet of the Kingdom (14:21-23), all sorts of people, even those whom the old Law excluded from worship.

Luke highlights Jesus’ goodness, sweetness and compassion. The patristic tradition calls him “the scribe of Christ’s meekness.” Jesus shows a particular predilection for the weakest. He says He has been sent to “bring the good news to the afflicted” (4:18). He sits down at the table of sinners and women “of bad repute” because He came to save the “lost” (5:32). A mirror of the goodness of the Father, welcomed with His profound experience of prayer – another subject dear to Luke. Seven times, he alludes to Jesus’ prayer (a number highly symbolic) and, three times (also significant) He clarifies it.

It is the second characteristic that would need to stand out in the new evangelist: GOODNESS, the essence of the evangelist. Perhaps, we need to change our attitude towards society. To have his heart seduced by the Love of God, yes, but he must also be fully embodied in reality, impassioned by everything human and attentive to humanity’s suffering. Recently, the monk Enzo Bianchi said: “The crisis of faith nowadays, rather than being a crisis of faith in God, is a crisis of human trust, it is a lack of trust in others, in life, in the future and, above all, it is a weakness in believing in love” (cf. 1 John 4:16).

The new evangelization will work if it is an act of goodness: coming from the Heart of God, going to the hearts of men and women of today, transmitting the heart of the Gospel to them, through the sensitive and passionate heart of the evangelist!...

Enthusiastic of the diversity

Luke presents an image of Jesus welcoming everybody, throwing Himself at the “pure” and “upright” Pharisees for their criticism (5, 30). He teaches tolerance: “Anyone who is not against you is for you” (9:50). Even His adversaries recognize that He “favors no one” (20:21).

But His unreserved openness to diversity is the fruit of the Pentecost. Proselytes coming “from every nation under heaven” (Acts 2:5) rush to the Cenacle. And, in spite of the abundance of “fish,” “the nets didn’t break.” Luke points out the harmony of Jerusalem’s first community which “had only one heart and one soul,” sharing everything in common (Acts 4:32-35) and capturing affection from everybody (Acts 2:47).

In ever widening circles, the Gospel goes beyond its boundaries: from Judea to Samaria, as far as the great pagan cities; from the synagogues to the diverse cultural environs of the Greek-Roman Empire, towards the “earth's remotest end” (Acts 1:8). In spite of the inevitable difficulties (Acts 6:1), the Church will choose to be open to universality. Initiated by Peter (Acts 10), he found in Paul his main paladin and was sanctioned in the “council of Jerusalem” (Acts 15).

Today, “diversity” (in its widest manifestations: ethnical, cultural, religious, philosophical, ethical) has come in through our ports – a phenomenon that, to a certain extent, is unstoppable. And it is frightening! The temptation to put up new barriers and segregating walls, to keep the “foreigner” out, is tempting! For the Church too. Enzo Bianchi warns against this “temptation to assume defensive positions, to surround ourselves in citadels that inevitably rely on numbers and enclosures: it is easy to give in to that lack of faith in the Lord from the past, the Lord who loves human beings, the Lord who “wants everyone to be saved” (1 Timothy 2:4).

In biblical language, “diverse” is translated as “holy.” God is “Holy of Holies,” the “Totally Diverse” par excellence. But His “diversity,” revealed in Jesus, does not scare us. It is an incommensurable wealth shared with lavish generosity. The new evangelist must be a “saint,” convinced that diversity is a gift of reciprocal enrichment!...

Driven by the wind of the spirit

Luke is also the man of the mission. When the Christian community lived with the expectation that Christ would return imminently, Luke prophetically emphasizes the urgent and fundamental task for the Church to announce the Gospel, to be Jesus’ witness “to the earth’s remotest end,” helped by the power of the Holy Spirit (Acts 1,8). The Book of Acts is also called the “Gospel of the Holy Spirit.” Here, we find more than fifty references to the Spirit. It is this which impels the Church to go out to the streets of the world to show the “Path” (Acts 19:19.23). And it is the great protagonist of evangelization (Acts 8:29.39; 13:3; 16:6-7).

Today, there are obvious signs of a certain tiredness and lack of enthusiasm in the communities of the “old Christian tradition.” The “new evangelization” is a call to bring back our courage and let us be led by the Wind of the Spirit. The “mission in the Holy Spirit” represents the young people of the Church, a sign of the Church’s vitality, a guarantee of its perennial spring. It allows new communities to spring up and it rejuvenates the “old.”

The new evangelist is he who opens the sails of his boat to the Wind of the Spirit, navigating with speed and confidence towards new worlds. As “those who hope in Yahweh will regain their strength, they will sprout wings like eagles; though they run, they will not grow weary; though they walk they will never tire” (Isaiah 40:31). On the other hand, a mission based on simple human strategies tries to advance at the oars’ pace. It will quickly succumb to fatigue rowing against back winds.

On June 29, we celebrate the feast of St. Peter, a good chance to visit the vocation of this apostle par excellence. Although we know St. Peter well, his figure never ceases to fascinate us. He is the…

Chairs represent a role, a vocation that one has to fulfill in his or her earthly life. Throughout salvation history, we have been witness to chairs being vacated and filled, according to God’s plan.…