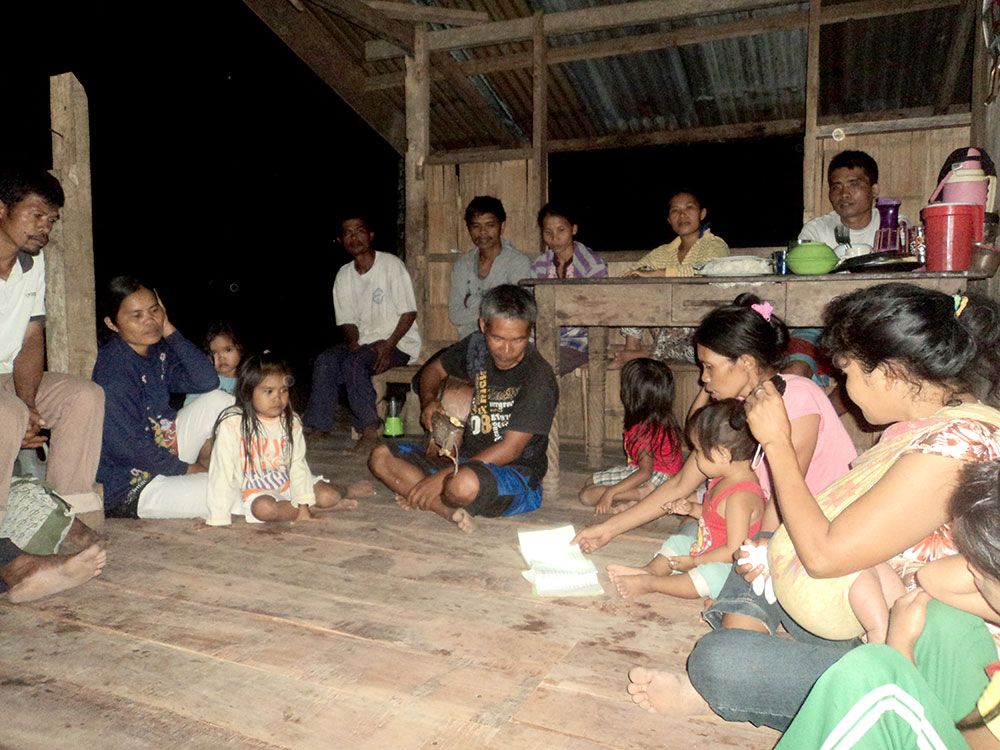 The creation and consolidation of BECs throughout the southern island of Mindanao by missionaries were major pastoral thrusts later adopted by the Local Church. These ecclesial communities have been instrumental in the evangelization of indigenous peoples and in recognizing their rights to ancestral lands.

The village of Kasunugan is located at the foot of Mt. Golo, the mountain range that traverses  Davao Occidental and Sarangani Provinces. It is a place of Barangay (Filipino word for village, district or ward) Molmol, part of the town of Jose Abad Santos (JAS) located both at the coastal and mountain area of Davao Occidental. There are roughly a hundred households in Kasunugan who are mostly Lumad.

With the entry of the lowlanders and their contacts in the bigger barangays and the town proper (where they market their produce), influences from the outside changed various elements of their indigenous culture from the food they eat, the clothes they wear, to the houses they build. Within just two generations, much of the indigenous culture got dissipated as the younger ones rejected their ancestors’ way of life.

Protestant missionaries – mostly indigenous pastors – settled in the uplands of JAS as logging operations dissipated the forests. Many were baptized in various Protestant denominations. In the 1970s, the Canadian PME missionaries reached this isolated town and also evangelized. Their first base was Kasunugan where the priests built a chapel and a convent where they could stay. They gathered children and adults for catechesis and soon they were baptized in the Catholic faith. In Kasunugan today, there are more Catholics than Protestants.

First BCC
By the time the PMEs reached Kasunugan, the Local Church of Mindanao-Sulu – specifically the Prelature of Tagum – had given birth to the first BCC in the country. The Maryknoll missionaries pioneered the building of BCCs in some parts of Tagum in the late 1960s.

The BCCs across Mindanao arose owing to the setting up of the Mindanao-Sulu Pastoral Conference (MSPC) by the Mindanao Bishops.  In their letter announcing the convening of the first Conference in 1971, they wrote: “...we hope to come up with some guidelines… for the building up of the Christian community in these southern-most islands of the Philippines.”

All Catholic households living within a village or town district with their own chapel were listed down as members of the GKK, no matter how big or small was the number of the total household population.

Role of the laity
BCC formation led to the active participation of the laity in the Church, necessitating the training of lay leaders who took on the major tasks in the BCCs as prayer leaders, facilitator of meetings and taking care of finances. The BCCs relied primarily on the role of the laity, but they succeeded only if there was full support from the parish priest.

From 1971 to 1976, three MSPCs took place which helped to cement the growing reputation of the Mindanao-Sulu Church as truly serious with its call for renewal and participation in human and spiritual formation.  Within a period of just five years, BCCs would sprout in the majority of parishes in Mindanao-Sulu. It was in this context that the Diocese of Digos (now covering the provinces of Davao del Sur and Davao Occidental) integrated BCC as its major pastoral thrust.

This explains why the PMEs immediately founded the GKK in Kasunugan after the evangelization process took place. In the course of their BCC organizing, from Kasunugan they moved on to nearby villages and set up chapel-based BCCs. Adult and youth catechesis were provided. To make attempts at inculturation, the IPs’ mother tongue was used.

The missionaries learned the language so they could translate the guides for sacraments, Mass prayers and songs in the Lumad language. Bible-sharing sessions at home were also introduced and their leaders were formed to take over some of the functions, especially during their Sunday para-liturgical celebrations.

In just a few years, from Kasunugan the BCCs expanded to more than ten chapels across the mountain range. Eventually, the PME moved towards the coastal area and within a decade, also the villages along the coast had their BCCs.

From BCC to BEC
Then came the conduct of the Second Plenary Council (PCP II) and the issuance of the Acts and Decrees in 1990-1991. The name BCCs shifted to Basic Ecclesial Communities (BECs) but the Cebuano-Bisaya term remained GKK. Eventually the PMEs left the place, and soon a diocesan priest, Fr Sonny Villahermosa, took over.

Being part of the Diocese of Digos, Fr. Sonny tried his best to align the further development of the BECs and the formation of lay leaders within the diocesan thrust which was to take seriously the call of PCP II for the new evangelization thrust.

The lumads’ rights
In Congress, a bill was passed, namely the Indigenous Peoples Rights Act (IPRA) in 1997. This law, which provided for the recognition of the Lumads’ prior rights to their ancestral domain, guaranteed the possibility that finally they would be able to secure their Certificate for Ancestral Domain Title (CADT) through the assistance of the newly set-up National Commission on Indigenous Peoples (NCIP).

Fr. Villahermosa took advantage of this law and began the process of doing research work required by the NCIP so that the CADT could be issued. Through the network of the BECs, the IPs soon had meetings with the NCIP staff so they could understand the law and make sure to work towards fully enjoying their rights.

The process took a long time but eventually the NCIP en banc approved their application covering close to 2,500 hectares – the only remaining land that had not been claimed by outsiders who managed to get titles to the land they bought.

While technically, the Lumad had a title to their ancestral territory, the problem was that there was no one they could turn to in order to assist them in developing the land so that its productivity could be improved, thus benefitting the households within the domain.

After the issuance of the CADT, the Lumads had to come up with an Ancestral Domain Sustainable Development and Protection Plan (ADSDPP) that will guide them in the development of their territory.  Neither the local government or surrounding NGOs could assist them. So from 2001 (when the approval came) up to 2014, nothing happened as the GKKs continued to hold their regular prayer and community action schedules.

Redemptorists take over
Bishop Guillermo Afable, Bishop of the Diocese of Digos, then managed to convince the Davao-based members of the Congregation of the Most Holy Redeemer (C.Ss.R or Redemptorists) to take over the Nuing Mission station.  Their itinerant mission team (RIMT) responded favorably to his invitation and found their way to Nuing in 2014.

The Redemptorists and lay missionaries first acquainted themselves to the history and pastoral realities of the mission station, visited all the GKKs, met the leaders and tried their best to understand the pastoral landscape.  Soon they found out what happened to the CADT of Kasunugan and the entire Barangay Molmol.

Again through the GKKs and in collaboration with the Protestant groups in the uplands, and tapping into the resources of government, a process was put in place towards working on the ADSDPP. The research arm of the Mindawon Initiatives for Cultural Dialogue of the Ateneo de Davao University (ADDU) also provided back-up assistance.

The tedious process involves doing a strategic planning for their ADSDPP and the training of the members of the Tribal Council and the indigenous peoples organization – many of whom are GKK leaders – so that they can develop skills in planning, implementing, monitoring and evaluating activities related to the ADSDPP.  A number of areas are covered: acquiring leadership skills in facilitating meetings, keeping minutes, building up networks, tapping government resources and the like.

Meanwhile we continue to reach out to the households within the domain – and the GKK assemblies and prayer gatherings provide good occasions for these – so that they deepen their knowledge about IPRA and CADT and they are better able to realize the importance of their indigenous knowledge, skills and practices (IKSP). We have even incorporated aspects of their indigenous rituals into the meetings and gatherings. We have also looked into how we can better inculturate the liturgical celebrations and administration of the sacraments.

All these efforts are ways to live up to the challenge of PCP II: “Our concern here must be to actively support, promote and accelerate the process of law on their behalf, and be on their side so that their ancestral domains, their culture, rights and the integrity of their environment could be defended, preserved and promoted.” (PCP II Acts and Decrees, no. 379).

Truly it has been the GKKs across the mountain range that made it possible for us missionaries to respond to PCP II’s call.  The BECs in this locality have thrived because faith and life are integrated, culture and evangelization are interfaced and the signs of hope flow like the mountain streams.

In recent history, a few committed citizens contributed a great deal to the cause of peace. They are inspiring examples to the world. The memories of their prophetic personalities should remain alive…