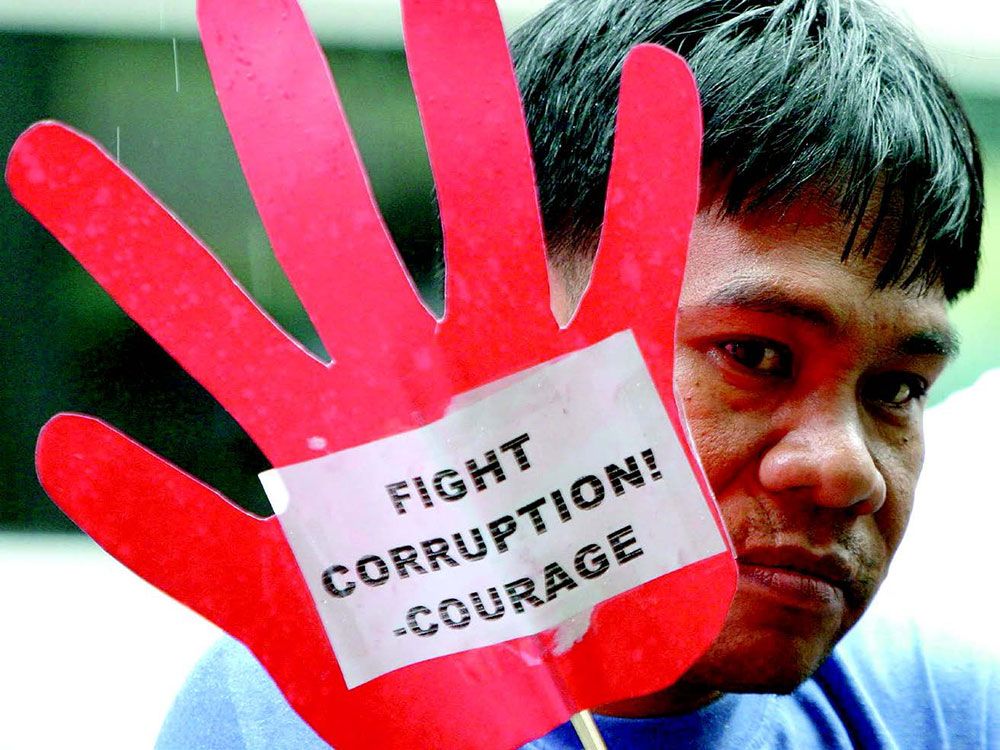 The scourge of corruption

Corruption reigns when people in business, in politics, and in the judiciary defraud and steal, smuggle, peddle drugs and hide behind a mask of innocence. Sadly, the Philippines in 2016 ranked low, 101 out of 176 countries, on the Transparency International Corruption Perceptions Index.

It is a brutal and painful reality that we live in a corrupt society. Politicians are considered the most corrupt of all. Even senators are on trial in the Philippines for looting the public coffers. One was able to get a Supreme Court decision to post bail for a crime for which there is no bail allowed. The decision was a miracle of compassion, some said.

The judiciary is open to corrupt practices. A recent case in the Philippines is that of a female US national who kept five Filipino children in her house illegally and severely neglected them, and when rescued and medically examined, it was found that they had been sexually abused and used in making pornography. Despite strong evidence of guilt, the judge dismissed the case on the slim and questionable grounds the rescue of the children by government social workers and police was illegal. Massive bribery was suspected to have been involved.

The good people who would never pay a bribe or act in a corrupt manner are disadvantaged as they are inhibited and prevented by their good conscience from doing wrong, taking advantage of others, committing an injustice, stealing, lying or cheating. They are the silent majority of good Filipinos but they must not remain silent. They are Filipinos of integrity and honesty. They are the moral people with a conscience built on knowledge of right and wrong. When temptation presents itself, they resist. But when threatened, they fear for themselves and their families.

The corrupt person has no conscience and is continually looking out for a way to exploit others, advance his ambitious goals of greed and dominance. In any situation where the official has power to give or withhold anything to which the member of the public has a right to receive – a driver’s license, a business permit or a police clearance – the official will be thinking, ”Aha, what’s in this for me?”

We are challenged and called upon to speak out and expose corruption wherever we suspect it is happening. Pope Francis is calling on us to say “No” to corrupt practices and to take a stand for integrity, honesty, human dignity, justice, good governance and human rights. Exposing corruption is dangerous as the powerful will silence the whistle-blowers and the human rights advocates who take a stand against corruption.

Daybreaks and new years are both beginnings; like Jesus, we are invited to begin our days and new year talking to God, thanking Him and asking for His blessings.