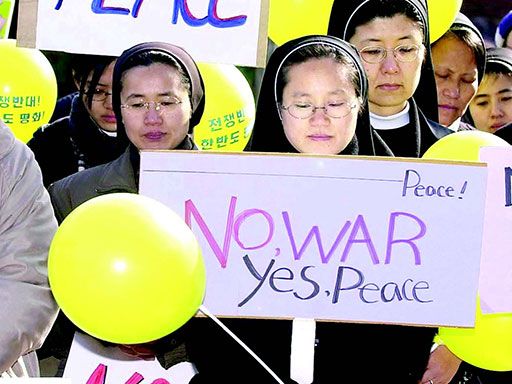 In a message sent to the South Korean people, the bishops slammed Pyongyang’s missile tests, but also warned all the “unreasonable provocations” that can increase the tension.

In their statement, the bishops asked “neighboring countries” (China, Japan, Russia, United States) to avoid their military escalation, or “unrestrained action,” which could only cause the “death of innumerable people, the fatal devastation of both sides, the regression of human history, and deep wounds for the whole of humanity.” Everyone is called to engage in “dialogue for peace” and work for the “coexistence of humanity, which is, in fact, the main purpose of diplomacy and politics.”

The statement makes a special exhortation to the bishops’ “fellow Koreans” in the North and South to stop using economic resources for “astronomical” military budgets, and use instead  some of those resources for the “human and cultural development” of the Korean peninsula.

The bishops called on Christians and the peoples of the world to be “peacemakers”. Establishing peace in the Korean peninsula could be the “U-turn” that brings peace to the world.

The Vatican Secretary of State, Cardinal Parolin (in photo), says a visit to North Korea would require serious preparation and consideration. But it could also “give support to the process of peace…