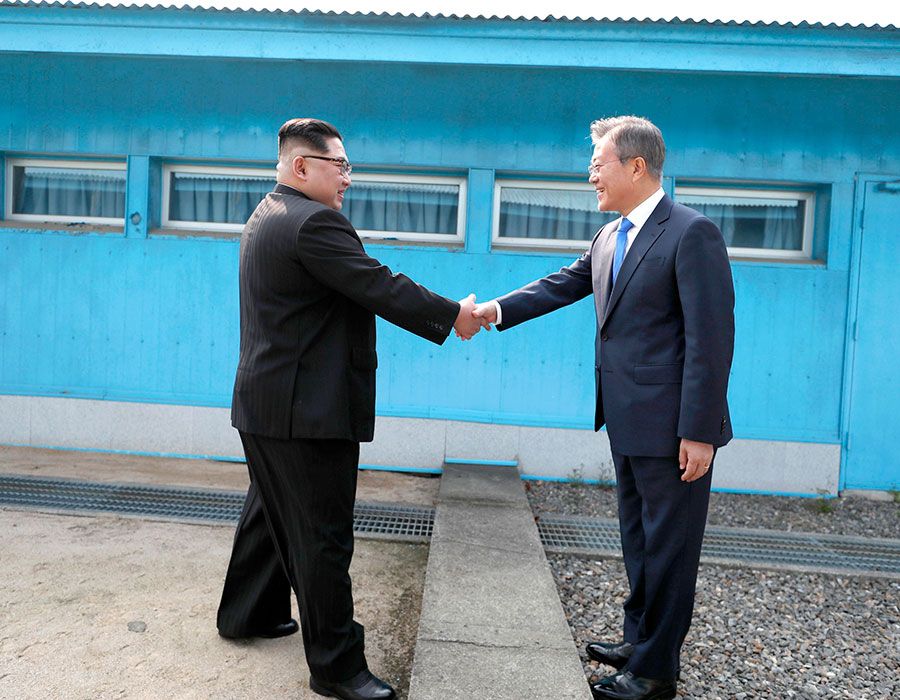 In the “Land of the Morning Calm,” a devotee of Our Lady of Fatima ordered his presidential residence to be blessed on May 13, shortly after his election. He then asked for the advice of the Pope. He believes that the Christian view of a “just peace” can prevent a “nuclear Armageddon.”

In September 2017, in his usual Twitter diatribes, Donald Trump did not hesitate to criticize Moon Jae-in’s “talk of appeasement” against Kim Jong-un. “Dialog is not the answer!” admonished the President of the United States. Less than a year later, America and the two Koreas almost formed an “axis of good” – due largely to the work of the new president of South Korea.

On April 27, at a historic summit in the demilitarized zone that divides their countries, Moon and Kim promised the “cessation of all hostile acts,” the beginning of “a new era of peace” and the “complete denuclearization of the peninsula.” The compromise was sealed in the Panmunjom Declaration, opening the door to another meeting between Kim and Trump, held in June 12 in Singapore.

Initially, this seemed like an unstoppable process. “I did not expect this diplomatic breakthrough [between Moon and Kim] given the ferocity of the rhetoric just weeks before, but the history of the relationship between the two Koreas is full of twists and turns, and when things happen in the region, they happen very quickly,” says Sea Kirsteen Kim, author of A History of Korean Christianity.

“When they dialogue directly and mutually, the two Koreas disturb other powers that have interests on the peninsula - the United States, China, Japan and Russia,” says the Professor of Theology and Global Christianity at Fuller Seminary in Pasadena (California). “It is therefore advantageous for them to move quickly and declare a fait accompli, because the other powers are rarely in agreement.”

The pacifist Moon has always been adept at dialogue. But what prompted the man whom Trump called “Little Rocket Man” to change his bellicose attitude? “It’s hard to say,” Kirsteen Kim admits. “Maybe it was the pressure of sanctions,” in effect since the first nuclear test in the North in 2006, or perhaps the eccentric leader of Pyongyang feels that his atomic arsenal gave him negotiating power.

Trump assured that it was his “hard policy” that brought Kim to the negotiating table, but Kim was outraged. Less than a month before the Singapore summit, he threatened not to appear, accusing Washington of wanting to “corner” him, as he did with Muammar Gaddafi in Libya, by demanding an ambiguous “unilateral denuclearization” that he considers “unworthy.”

The Sunshine Policy
The “good intentions” of the North Korean leader, despite the enthusiasm generated by the inter-Korean summit in April, never convinced Kirsteen Kim: “It is hard to imagine Kim giving up his weapons because they were, above all, these that allowed him to be heard by the president of the United States. I do not see any reason to trust Kim. North Korea has already reneged on countless promises.”

Could this rapprochement between South and North be possible if the presidency in Seoul was not Moon Jae-in, a practicing Catholic, faithful follower of the “diplomacy of encounter” promoted by Pope Francis?

“Yes, Moon’s defense of dialogue owes much to his Catholicism, but it is a conviction prior to Pope Francis and much in line with the Sunshine Policy of former President Kim Dae-jung, who was also Catholic and allowed the first direct talks [with Pyongyang] in 2000,” notes Kirsteen Kim. “Another president, Roh Moo-hyun, who facilitated the second meeting with the North in 2007, was also heavily influenced by Catholic social teaching.”

“The Sunshine Policy aims to change the rhetoric on the peninsula, recognizing the humanity and dignity of the North Korean people, and softening positions through the establishment of warmer relations,” explains the British academic in California.

It is a policy which “rejects any military solution or the annexation of one Korea by the other, proposing a period of peaceful coexistence of the two States in a federation, before eventual reunification. To this end, and irrespective of progress in intergovernmental contacts, it has been possible to encourage bilateral economic agreements and the reunion of separate families.”

Career Without Blemish
Moon Jae-in, 64, elected in May 2017 with 41% of the votes among thirteen candidates, could not be more different from her predecessor, Park Geun-hye, sentenced to 24 years in prison on April 6 on charges of “abuse of power, acceptance of bribes and disclosure of State secrets.”

Moon, by contrast, has an unblemished career of anti-corruption and a life dedicated to democracy. He was arrested in 1975 during protests against two military dictators, Park Chung-hee, father of his predecessor, and Chun Doo-huan. Prevented from being a judge or prosecutor, he decided to work “outside the system” as a human rights lawyer.

From 2003 to 2008, he was the chief of staff of former President Roh Moo-hyun, also a Catholic, whose government fostered harmonious relations with the North. To him is due the Kaesong Industrial Region, where about 500,000 North Koreans worked with South Korean engineers and administrators. This complex of factories was shut down in 2016 because Pyongyang was diverting the workers’ wages to finance nuclear ambitions. Moon has promised that he will reopen it and resume the suspended meetings of 60,000 families separated by the 1950-53 war if there is progress in the negotiations.

Roh’s suicide in 2009, after allegations that he received millions of dollars in kickbacks, deeply shook Moon. “He defined my life,” writes the current president in his memoirs. “He was my destiny.” In 2012, Moon run for president, losing by a narrow margin to Park, but gaining a seat in Parliament.

Park Geun-hye had promised to improve relations with neighbors on the other side of the ‘most dangerous frontier in the world,’ but nothing advanced. So during the election campaign, Moon made peace and reconciliation with the North a political priority.

Fatima And The Vatican
One of Moon’s first actions after being elected was to ask his parish priest to bless the Blue House, the presidential residence, on a symbolic date, May 13, as a sign of devotion to Our Lady of Fatima. And two weeks after his inauguration, Park’s successor sent an emissary to Rome to meet with the Pope and the Vatican secretary, Cardinal Pietro Parolin.

Involving the Holy See in the reconciliation effort “was more than symbolic,” says Viktor Gaetan, correspondent for the National Catholic Register newspaper, in an article published in the magazine Foreign Affairs. “This alliance allows Moon a broad and discreet network of resources to explore non-military options, including a group of Korean and Japanese bishops, as well as the support of Catholic leaders in Taiwan and Hong Kong. Francisco and Parolin have opened high-level communication channels with Beijing and, thanks to them, have provided Seoul with information and analysis that does not depend on Washington.”

In aligning with the Pope, Gaetan adds, “Moon also gains an alternative narrative,” different from the “axis of evil” in which, “in demonic terms,” George W. Bush included North Korea in 2002, and Trump’s caricature of Kim Jong-un “as a suicide maniac.”

The Pope has a very different position from the U.S. in relation to the Koreas. He opposes, for example, the “war machine” which is the anti-missile system THAAD (Terminal High Altitude Area Defense). He disagrees with the imposition of economic sanctions because they “penalize more the people than the elites.” And it encourages dialogue as “the only viable and moral strategy.”

In the country to which a Ming dynasty emperor, fascinated by the serenity of the landscape, gave the name of “Land of the Morning Calm,” Moon’s Christian vision for a “just peace” is welcome. Surveys indicate that 77% of South Koreans want to re-approach to the North, convinced that the peninsula can overcome an “artificial divide” and avoid “nuclear Armageddon.”