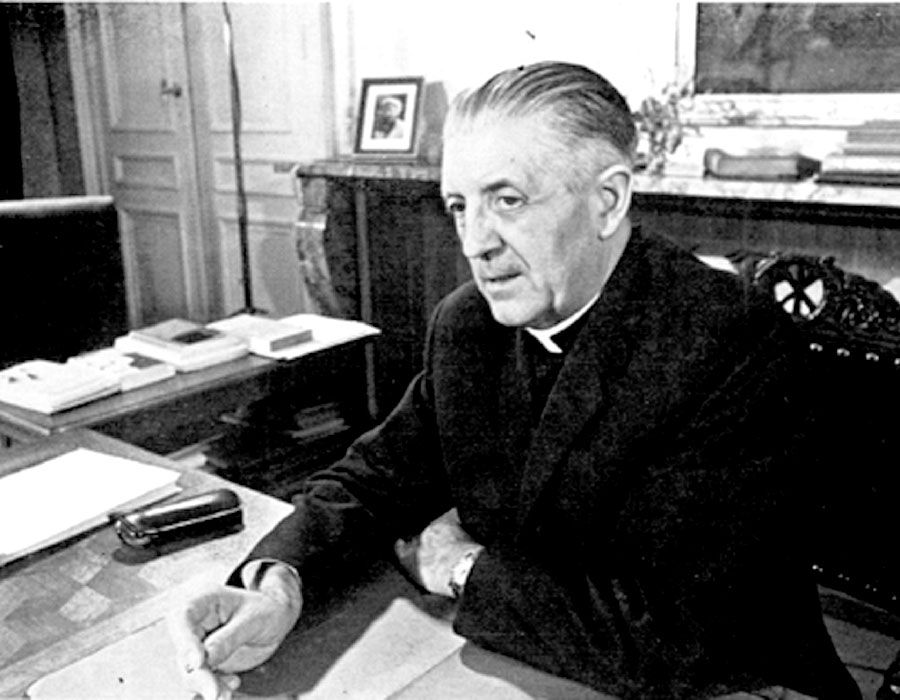 From Reform to Renewal

Gifted with extraordinary intelligence, clarity of expression and deep spirituality, Cardinal Suenens (1904-1996) played a pivotal part during Vatican II, aiming at the reform of the Church. Later he became the chaplain of the World Charismatic Renewal Movement. He said: “I used to be concerned with the motor of the car, now I am concerned with the fuel, the Holy Spirit’s energy”.

Cardinal Leo Joseph Suenens had a charming personality and a strong faith which was both critical and serene. One of his favorite themes was that the Holy Spirit is the principle of surprise in the Church. He chose “In the Holy Spirit” as his Episcopal motto. It is the key to the unity of his life as Peter Hebblethwaite wrote.

In 1974, Suenes wrote a book: A New Pentecost, in which he showed enthusiastic support for the Charismatic Movement. This brought disconcert among many of those who admired him for his commitment to the reform of the Church, as if he had abandoned the cause. But that was not the case, he was simply seeking new horizons.

From then on for him reform was swallowed up by renewal, meaning that if you really want to reform you need first to renew yourself interiorly. Suenes had not really changed. His old confidence in the Spirit at work in the world was simply transferred to this new movement.

Encouraged by Pope Paul VI, Suenes became in effect the international chaplain of the Catholic charismatics. Responding to the charge that the charismatic movement took Christians away from social involvement, in 1978, he had meetings with Dom Helder Camara of Recife, Brazil, and tried to build a bridge to liberation theology.

After one year of the pontificate of Pope John Paul II, Suenes, aged 75, retired from Malines-Brussels, in October 1979. By then his international reputation was secure. His influence had permeated the Second Vatican Council (1962-65) despite the suspicion and even antagonism of the more conservative elements in the Roman Curia. His strength lay in three factors: his manifest understanding of the modern world, his ability to convey this understanding in lucid language and, above all, the trust which the Popes John XXIII and Paul VI had placed in his judgment. He died at 92 in 1996.

From Orphan To Cardinal
Leo Joseph Suenens came from a relatively impoverished background. He was born at Ixelles, Belgium, in 1904, the only child of his parents.  He was baptized by his uncle, who was also a priest. At the age of four, he lost his father, who had owned  and managed a small restaurant. Leo then lived with his mother in the rectory of his priest-uncle from 1911 to 1912.

Wealthy relatives wanted him to study economics and manage their fortune, but he chose the priesthood. He studied at Saint Mary’s Institute in Schaerbeek and then entered the Pontifical Gregorian University in Rome where he obtained a doctorate in theology and in philosophy and a master’s degree in canon law.

Ordained to the priesthood on September 4, 1927, Suenens initially served as a professor of moral philosophy and pedagogy. In August 1940 he became vice-rector of the famed Catholic University of Louvain. When the Louvain’s rector was arrested by Nazi forces in 1943, Suenens took over as acting rector, where he sometimes circumvented and sometimes openly defied the directives of the Nazi occupiers.

Raised to the rank of Monsignor in October 1941, he was included in a list of thirty hostages who were to be executed by the Nazis, but the Allied liberation of Belgium occurred shortly before these orders could be carried out.

On November 12, 1945, he was made Auxiliary Bishop of  Malines-Brussels  and he served in that position for sixteen years in this way gaining a precious experience as a pastor. He was eventually named Archbishop in 1961 and Cardinal in March 1962.

Protagonist At The Council
When Pope John called the world’s bishops to Rome for the Second Vatican Council (1962–1965), he found in Suenens a man who shared his views on the need for renewal in the Church. When the first session fell into organizational chaos under the weight of its documents, it was Suenens who, at the invitation of the Pope, rescued it from deadlock and essentially set the agenda for the entire Council.

By the opening of the second session in the autumn of 1963, John XXIII was dead and Montini was reigning as Pope Paul VI. He made Suenens one of the four moderators of the Council. Since the new Pope had a sensitivity to the problems of the age very similar to that of Suenens, the Council reflected their concerns accurately.

It decreed the updating of Church liturgy (involving the progressive introduction of vernacular languages in place of Latin) and the understanding of the Church itself as the People of God – involving greater recognition of the role of the local churches and the laity as well as the rights of bishops acting in collaboration with the Pope.

It also spoke of the need to acknowledge the good achievements of the modern world as well as the dangers inherent in material values, the oppression of the poor and the nuclear arms race. Ecumenism, involving the truth to be perceived in other churches and the duty to work towards the unity of all Christians, was accepted as a centerpiece of Roman Catholic thinking.

Close To Pope Saint John XXIII
For the society from which he came, for which he spoke and to which he addressed his many books, Suenens was a prophet who did as his friend, Pope John XXIII, so often advised: he read the signs of the times. It explained both his extraordinary influence in the world he understood so well and the discomfiture which his stance in the past had caused in those of older traditions and different perspectives.

Suenens was so closely linked with Pope John XXIII that he was chosen to present the encyclical letter, Pacem in Terris, to the United Nations on April 13, 1962. And when the Council reassembled in October 1963, it was Suenens who preached the homily on Pope John XXIII. “Here was a man, he said, who was surprisingly natural and at the same time supernatural. In him there was no dualism.”

The same could be said of Suenens at his best. Those who thought of categorizing him as a  leftist reformer would be surprised at the sound nature of his orthodoxy. He once remarked, “If you don’t believe in the Holy Spirit or Resurrection or life after death, you should leave the Church.”

Mutilated, starved, enslaved and beaten yet totally consumed by love for his tormentors even to his death, Saint Isaac Jogues (1607-1646), apostle to the Native Americans, remains one of the most…