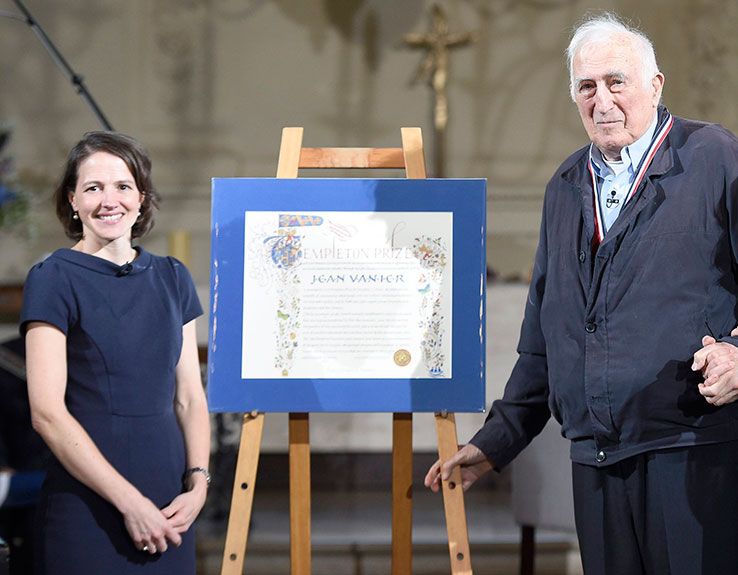 Lessons from the Vulnerable

On May 6, 2019 Jean Vanier, great modern prophet, died. A naval officer and then theology professor, he left everything to live with the handicapped. He is the founder of L’Arche (Noah’s Ark), the worldwide movement in favor of the disabled.

"As my life draws closer to the end”, Jean Vanier wrote to his friends, “I discover more and more that those who are poor and weak are a presence of God: they have transformed me.” His adventure in love started with a visit to an institution for the mentally disabled in the late 1960s.

“Do you love me? Will you be my friend?” they asked him; and he realized instinctively that what they needed was a loving family, a place of belonging – not an institution which saw them firstly as ill. That was the origin of L’Arche.

The central insight of L’Arche is that society can ultimately be healed only by those whom it rejects. Reaching out to them becomes a means of being led – by God to God.

Out Of Security And Career
Jean Vanier was a Canadian naval officer who eventually became a professor of theology. At the age of 35 in 1963, he decided to leave his stable career and security to settle in Trosly, France, and live with people with intellectual disability. He welcomed two such people and bought a small house.

The original idea was to give the disabled a family environment. His example was soon followed by families who adopted a disabled person as one of their own. The movement spread with the name L’Arche, the French word for ‘Noah’s Ark.’ Today, L’Arche is made up of 154 communities spread over 5 continents, with 10,000 members.

In 1971, the organization of a pilgrimage of 12,000 people with developmental disabilities, their friends and families to Lourdes led Jean Vanier to the founding of Foi et Lumière (“Faith and Light”). This movement unites people with an intellectual disability, their family members and friends for regular gatherings and periodic pilgrimages of friendship, prayer and celebration. Nowadays, “Faith and Light” has nearly 1,500 such communities in 81 countries.

“Dare To Touch Them!”
The teachings of Jean Vanier are as fascinating as his life witnessed. He writes: “Sometimes we approach those who suffer but in our hearts there is a rebellion that blinds us and stops us from seeing Jesus’ light in the person who suffers. These few lines want to tell you not to escape or run away from the persons who are suffering and are wounded. Dare to approach them, to touch them. Dare to enter into communion with them. Then you will discover within yourself and them a source of life, seeds of resurrection. It is the great secret of Jesus and His Gospel. In every person – it doesn’t matter if wounded, hardened, authoritarian, cruel, apparently closed to God and steeped in sin – there is a hidden source of living water ready to spring up.”

Vanier’s travels, as he went to support his initiatives, covered many of the world hot spots and put him in touch with remarkable people, among them Cardinal Arns of Sao Paulo, John Paul II, and Mother Teresa. He was in Honduras when Archbishop Romero was killed in El Salvador in 1980; two years later he was in South Africa, penning a brilliant summary of apartheid; in 1988 he was on the West Bank after the first intifada broke out.

Pope John Paul’s Conversion
Struck by how societies “continue to be places of suffering, oppression, violence, conflicts and inequalities” despite social reforms and movements in favor of rights, he noticed how L’Arche signals the deeper conversion that needs to take place for authentic social change to occur. It is stated in the L’Arche charter that: “The disabled are a living reminder to the world of the essential value of the heart without which knowledge, power and action lose their meaning and purpose.”

Even Pope John Paul II needed converting on this point. At breakfast with the then fit and healthy Pope in 1987, Vanier found that John Paul II had difficulty understanding what he meant by a disabled person having a healing presence. Then the Pope got sick and, “a deep bond arose between us,” wrote Vanier who had a leading role in the Pope’s 2004 visit to Lourdes. “Our Pope is poor. He is fragile, but he is the glory of God. God manifests Himself in him” said Vanier, standing just a few feet from John Paul II, who never took his eyes off Vanier’s. It was, he wrote, “an exceptionally moving moment.”