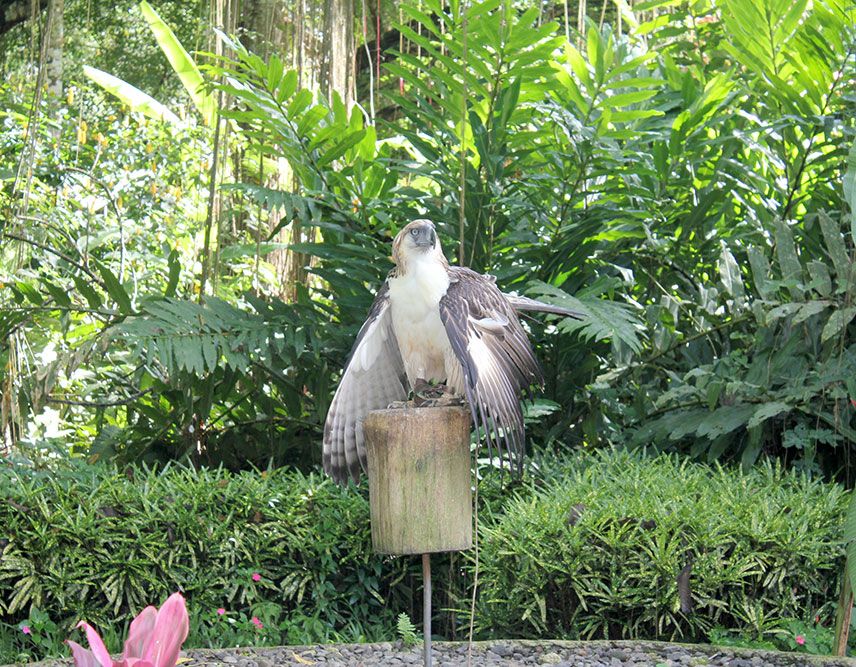 In its bid to save the endemic but critically endangered Philippine eagle from extinction, the Department of Environment and Natural Resources (DENR) is sending pairs of the country’s national bird abroad to garner international support for its conservation.

During the celebration of Philippine Eagle Week (PEW) last June 4-10, two Philippine Eagles were flown to Singapore.  “Sending Geothermica and Sambisig to Singapore is a historical milestone and a tangible indication that the international community is needed in the protection and conservation of the Philippine eagle,” said Environment Secretary Roy A. Cimatu.

Cimatu said his department may expand the deployment of the endemic birds to the United States as one institution “has signified interest in looking after a pair of Philippine Eagles to help conserve the species.” Cimatu believed that sending a pair of Philippine eagles abroad would help strengthen its efforts in saving the bird from extinction.

Currently, the two Philippine eagles are living at Jurong Bird Park, home to some 3,500 birds across 400 species, of which 20% is threatened.  “With millions of tourists flocking at Asia’s largest bird park, we are bringing the eagles closer to the international community in the hopes of encouraging international attention and support for their conservation,” Cimatu pointed out.

Another reason for sending eagles abroad was that it also served as “a biosecurity measure to ensure the survival of the species as a fallback population in the event of catastrophic events like disease outbreaks or extreme natural calamities taking place in their Philippine habitats,” explained Cimatu.

Endangered Bird
The Philippine eagle is second only to the Madagascar sea eagle in rarity.  In size, it beats the American bald eagle; it is the world’s second largest – after the Harpy eagle of Central and South America.

Today, only about 400 pairs of Philippine eagles survive in the wild.  Most of them can be found in the forests of Mount Apo and other parts of Mindanao.  Other remaining birds can also be seen flying over in the forests of Sierra Madre in Luzon and Samar and Leyte in the Visayas.

“On the average, a Philippine eagle pair needs about 4,000 to 11,000 hectares of forest land to survive in the wild, depending on the number of prey items in the area,” pointed out Haribon, the pioneering non-government organization in eagle conservation. The eagle’s nest is approximately 80 feet above the ground (usually on tall trees) in prominent mountain peaks overlooking a river or stream to give a good view of its territory.

With a wing span of nearly seven feet and a top speed of 80 kilometres per hour, the Philippine eagle can gracefully swoop down on an unsuspecting prey and carry it off without breaking flight. Although it weighs anywhere from four to seven kilograms, it has a grip three times the strength of the strongest man on earth.

Deforestation
“The Philippine eagle has become a critically endangered species because forest destruction has made it lose its natural habitat,” deplored Dennis Joseph I. Salvador, the executive director of the Philippine Eagle Foundation, Inc. (PEFI).

But deforestation is not the only problem that threatens the survival of the Philippine eagle and other birds.  Hunting has also been blamed as a major culprit.  “Some do it because of ignorance but most, I believe, because of arrogance,” Salvador said.

And then, there’s climate change. “Rapid climate change also directly affects the survival rate of the remaining Philippine eagles,” said Haribon.  “It severely strikes avifaunal diversity in the Philippines, where almost 30% of bird species are endemic.”

Still another problem: reproduction of the eagles. The female eagle lays only one egg every two years, according to the eagle foundation.  Both parents alternately incubate the egg for about 60 days, although the female spends more time incubating while the male hunts.

Upon hatching, the eaglet remains in the nest for about 5.5 months.  Once it fledges, the parents will continue to look after the young eagle for as long as 17-18 months teaching it how to fly, hunt, and to survive on its own.  The young eagle matures in about six years.

“Our data suggests more than 90% of juvenile eagles die before they reach maturity,” discloses Salvador.  “A large part of this is caused by humans.  Eagles were shot, trapped, and hunted.”

Efforts To Save The Eagle
Salvador pinpointed that the “loan program” done with Singapore only represents a small part of a comprehensive population management plan on the endangered species.  “Given current threats, more intensive action on protection and law enforcement need to take place in-country,” he said.

At its Philippine Eagle Center in Malagos in Calinan District – about an hour and a half ride from the heart of Davao City – they have launched programs that include field research, community-based initiatives, captive breeding and conservation education.  “These programs are integrated and permit a holistic approach to conservation and management of biological diversity,” says Carla Joy E. Salvacion, the conservation education administrator.

In July 1995, then President Fidel V. Ramos signed Proclamation No. 615, naming the Philippine eagle as the country’s national bird.  He said that the eagle is found only in the Philippines and as such should be a source of national pride.

“If the national bird dies,” Ramos pointed out, “so will all the country’s efforts at conserving its natural resources and treasures.” Salvador echoes the same concern: “When the last eagle dies, it shall be the sign of the worst yet to come: The death of our environment.”

The Land of Natural Disasters

Located in the rim around the Pacific Ocean dubbed “The Ring of Fire,” the Philippines is one of the most disaster-prone countries on earth. It is hard hit all year round by earthquakes, volcanic…