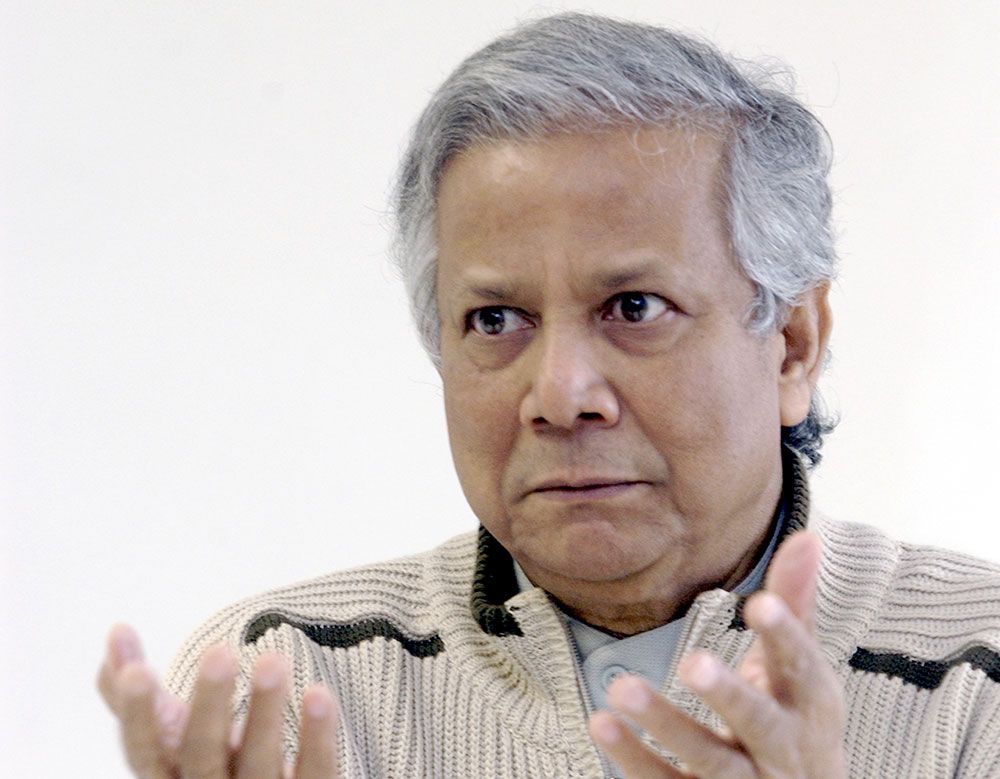 Muhammad Yunus, economist, 2006 Nobel Peace Prize laureate, and the creator of modern micro-credit, envisages a project for a new world changed by the coronavirus. He advocates that the vaccine against COVID-19 must be declared a “global common good”.

You   underlined,   in   harmony   with the   Pope,   that   after   the   COVID-19 crisis it will be necessary to find a new model. How do you think it is possible to make those who hold power understand this message?
Going back to the old world would be an insane action because the world  that we’re coming  from  was  a  very  inhospitable world, a terrifying world, a world which was about to finish itself by global warming, by wealth concentration, by artificial intelligence removing human beings from jobs. At that point, everything was converging and we had only a few years left before the whole world collapsed. From the global warming side, there is a very small time left before the world becomes unlivable.

It is the same for wealth concentration, which is a ticking time bomb which can explode politically, socially with anger, and the same for artificial intelligence, because of which people will have no job or no work. That’s not the kind of world that we would like to go back to. And coronavirus has done a great favor despite the fact that it made a horrible situation of the planet, because it stopped the machine in rushing towards death. So today we are at least not rushing anywhere. We can decide where we want to go to find safety and security. Definitely we don’t want to go back to the terrible situation. Not going back means that we have options to go someplace else.

But what if decision-makers don’t accept that?
Well if people want to go someplace else, decision-makers will have not much of an option left.  If public opinion becomes strong, I don’t think that can be ignored. I try to encourage the young people to look at the situation and make their judgement. Teenagers are the ones who are marching on the street under the banner “Fridays for Future.” They are telling the world that we are on a wrong path.

If Pope Francis gives the leadership, immediately the message becomes powerful. People respect his views globally, irrespective of the religious affiliation. We remember the impact his views made during the Paris negotiations on reaching consensus on the global environmental crisis. His call to the world helped in reaching the Paris Agreement. Pope Francis can play a very important role now. I request him to play that role firmly.

In a recent streaming lesson you underlined that economy must be used not as a mere science aimed at maximizing profits, but rather as a tool to achieve happiness. How can we achieve this goal?
I  don’t  think  economics  practiced  in  the world  today  deserves to be called a social science. There is not much social about it. Its sole concern is maximization of personal profit. It is not concerned with the common interest of people.  It is only concerned with how to accumulate the wealth of nations without concerning itself with how many or how few people got this wealth.

Nor does it concern itself with the safety of the planet. Social science must address societal problems, what is good for people and what is good for the planet, and it has to offer concepts which make people’s lives better, make the planet safer. To get to the new world we’ll have to redesign economics, giving it social orientation. It will be a social consciousness driven economy.

It will be an environmental consciousness driven economy. If we include collective interest into economics, suddenly economics becomes different. Then we need two different types of businesses, one for profit maximization, and another for solving the common problems of people with zero personal profit. The same person can do both kinds of businesses. We don’t need two different persons to do that.  In one business, he takes care of himself, and in the other business, he takes care of everybody else and the planet. I call this new business social business. This is the business dedicated to solving the problems of the people and the planet without any intention of making personal money. This new economics will be the basis of building the new world.

You have launched an initiative for a free vaccine that is accessible to all. How do you think it is possible to subtract medical research from the logic of profit?
I am not denying companies from getting their fair return on investment. We can discuss what the size of investment was and what should be a fair return in it. They can be paid back to make the vaccine a global common good. Ownership has to be with people, not with a company.

If we want to bring it to people all around the world at the same time, it must be produced all over the world. Not just in one or two places that we see being planned now. Already one company has declared that the first delivery of vaccine will be given to the United States. Another company declared that the first delivery will be given to Europe.

What about the rest of the world?  If you  don’t  give  the  vaccine to the rest of  the world  there  will  be another  trouble. It will immediately create a new mega-business of producing and selling look-alike fake vaccines. Since the genuine vaccine is taking time to reach billions of people, desperation to access will lead to this situation. People in poor countries will fall victims to this business of fake vaccines because they cannot compete with the highest bidders in the genuine vaccine market. Before such a situation arises, the world must declare the vaccine as a global common good.

I am making this appeal again to put pressure on governments to get this declaration made as soon as possible. Make COVID-19 vaccine a global common good. I appeal to Pope Francis to put his powerful voice behind it.

As the Pope said, the pandemic, besides being a planetary tragedy, represents an opportunity to develop a different future. How do you imagine this future and how do you think the new world balance might be?
I fully agree with what the Pope has said: we must not go back. Pope Francis has to say it again and again in a very bold way so that it gets heard by everybody and people can sit up and listen to him.  He’s now the moral voice for the whole world. So this is very important that he keeps insisting on it. Yes, it’s possible to change this world.

When we decide not to go back we have to develop policies, institutions and facilities to make sure we go to the right direction and get there quickly. We must ask the governments to redirect the bailout packages to support the initiatives dedicated to not going back, rather than giving them to speed up the process of going back.

We have to check which business is contributing to global warming or wealth concentration or unemployment. We set up check points to stop the wrong businesses getting into the new world. We cannot take the fossil fuel business into the new world. We tell them you have to come back with the renewable energy if you wish to be in the energy business. If you are a pollution-creating company, we tell them that you have to come back with the businesses for creating a circular economy.

Do you think that spirituality is important for this change?
Sure it’s very important. Coronavirus has transformed everything by creating a situation where we cannot get to meet each other physically. We are made to stay behind doors in our homes and social distancing became part of our lives. While we are deprived from physical proximity, this becomes a good occasion to achieving spiritual unity.  Published in L’Osservatore Romano

“Dialogue is the only way forward”

Myanmar has been in the world’s spotlight due to the ongoing Rohingya Muslims crisis in Rakhine. The Pope’s visit to the country and to Bangladesh furthered highlighted the human calamity. Cardinal…