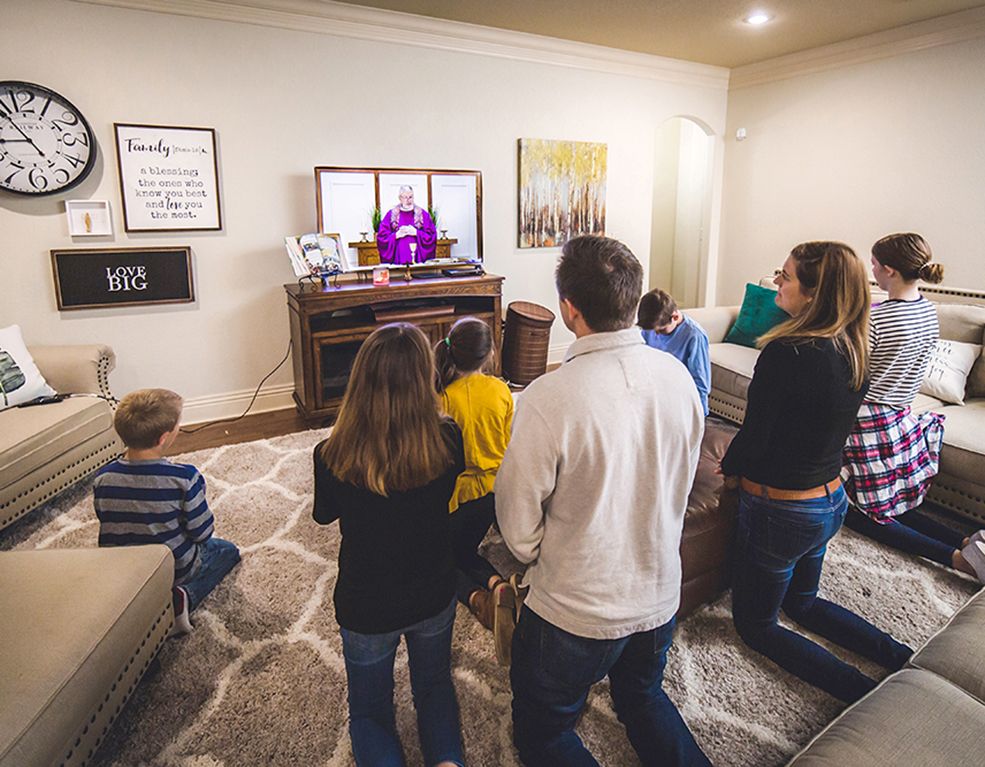 During the strict lockdown of March 2020, young parishioners of St. Benedict the African Parish in Chicago gave assistance to the parish in broadcasting its liturgy and other weekly activities on Zoom. This new way of reaching out to the people is vital for the future of the Church.

Even though there is no congregation at Sunday Mass, the community at St. Benedict the African Parish in Chicago has never been so close. As Chicago entered a strict lockdown in March 2020, young members of the community helped the parish transition to broadcasting its liturgies and some of its weekly offerings, like Bible studies, on Zoom.

When the pastor of the historically Black Catholic church, the Rev. David Jones, saw how the Zoom liturgies and Bible studies were helping older members of the community overcome their isolation, he challenged the parish team to come up with online programming for every day of the week.

“The beauty that I witnessed was the community that was formed,” said Father Jones. Around 20 people, or 10 percent of the parish’s virtual Sunday Mass goers, tune in every day at noon for discussion groups or weekly to pray the rosary.

The daily Zoom group is made up of parishioners who were not well-acquainted before the pandemic, but who have become close, thanks to daily conversations. Now, when one person is unable to call in by Zoom, the group works together to make sure the missing member is all right.

The parish, like many I contacted for this article, has not seen a significant decrease in Sunday attendance since switching to online liturgies. In fact, at St. Benedict, some Mass goers who previously attended occasionally now attend online every Sunday, Father Jones said. The parish also sees new possibilities in using online connections not just for evangelization but for fostering greater involvement of young people, stabilizing parish finances with online giving, and creating accessible communities for isolated parishioners.

In the early days of the pandemic, the widespread embrace of streaming liturgies led theologians to publicly debate many questions. Among them were: Do livestreamed Masses truly allow for the active participation of the laity? Does filming Masses hurt decorum? Is it clericalist for only priests to be receiving Communion during the pandemic? Considering the shortcomings, should we be livestreaming Masses at all?

These were and still are questions worth asking, but one year later, the vast majority of more than 70 Catholics I spoke with by phone, email, and social media agreed that they had benefited from the experience of worshiping through a livestreamed Mass–and hoped to continue to do so. In particular, individuals who are homebound, have a disability, or are immunocompromised, along with their families, expressed gratitude for the services. Most people I spoke to expressed a deep desire to return to in-person Mass but hoped that online offerings would continue indefinitely for those who are unable to attend even in normal times.

Talking Tech
Early in the pandemic, in those last weeks of March 2020, the parish livestream landscape was fairly barren. A handful of tech-savvy priests set up Facebook Live broadcasts, but most parishes went dark, assuming the suspension on public Masses would soon be lifted. As Easter drew closer, more and more churches hurried to implement livestream Mass. Many of those parishes ran into two main challenges: the cost of the equipment required for livestreaming and a lack of technical expertise.

At wealthier parishes, the transition was seamless. But parishes operating on shoestring budgets exacerbated by the pandemic–many of whom could not afford to extend the range of internet coverage to reach their church buildings, purchase cameras, or broadcasting equipment–settled for streaming private Masses from the rectory on the priest’s smartphone. Financial issues aside, many parishes struggled to find someone who could run their livestream.

One important consideration for parishes setting up livestream Masses is whether to create a videoconference, in which parishioners can see one another, or only show the sanctuary area. At St. Benedict the African in Chicago, choosing the former helped lead to a strong sense of community among those in attendance. The Catholics I spoke to generally agreed that the Zoom format was more intimate, even if they typically attended the more usual livestream.

Leaving No One Out
The group that perhaps has benefited most from livestreamed Masses is made up of those who had difficulty going to Mass in person even in pre-pandemic times: the homebound, those with disabilities or disabled family members, and those whose work schedules prevent them from attending Mass regularly. Now many of them find themselves connected to parish communities in ways that previously were impossible.

Ashley Ann Red, a parishioner at St. Thomas à Becket in Montreal, Canada, said her mother had been immobile for a year awaiting a hip surgery and could not come to Mass. “When Covid started, our parish started to stream Mass,” Ms. Red said. “It was very comforting.”

Katie Corkern, a parishioner at St. Helena Catholic Church in Amite, LA, said her sons were also comforted by livestreamed Masses. Her middle son, Connor, 14, is blind, nonverbal, uses a wheelchair, and has a weak immune system. Connor loved going to Mass in pre-pandemic days, she said, and now enjoys listening to it on television. Ms. Corkern’s other sons “thought Mass on TV was awesome and so cool” at first, Ms. Corkern said, but now they feel left out seeing their friends go back to Mass in person. The Corkerns will not be able to go back to Sunday Mass until they can be certain it is safe for Connor, which may take months, as some people at her parish do not wear masks. In the meantime, Ms. Corkern said she hopes her parish will continue livestreaming, but she is not sure if they will.

Like Ms. Corkern, Donnie Smith of St. Joseph’s parish in Marietta, Ga., is concerned about the safety of going back to Mass. He converted to Catholicism on Easter 2019 but has rarely been able to go to Mass in the last year because he suffers from a heart condition that puts him at high risk of complications from the coronavirus. In the meantime, he has been following his parish’s livestream. “I can’t wait for my first week back at Mass,” Mr. Smith said.

For Catholics who are permanently homebound or disabled, livestreamed Masses are only one part of the outreach they need, especially as home visits have been suspended in many places. Laurie Mehta, a parishioner at All Saints in Cincinnati, is blind and has been advocating for Catholics with disabilities in her diocese for years. Ms. Mehta hopes that Catholic churches will continue livestreaming for the sake of the homebound and disabled, but she has set her expectations even higher: She hopes parishes will begin organizing a ministry to give people with disabilities rides to Mass when the pandemic is under control.

The Road Ahead
For some Catholics looking for a sense of community in a time of isolation, the wide array of livestreamed Masses available has provided an opportunity to reconnect with old parishes or explore new ones.

Priests and parishioners at Xavier University’s Bellarmine Chapel, St. Benedict the African in Chicago, and Dolores Mission in Los Angeles all said people who lived far away from their parishes had begun joining their online communities. Adrienne Alexander, a parishioner at St. Benedict the African in Chicago, said one woman from Seattle joins her parish’s Zoom group daily. “She’s never been to our church, just found us on the internet and loves it,” she said.

For others, the dispensation from Sunday Mass has been a chance to gather in small “house churches” with one or two families or to organize online liturgies of the word with other laypeople.

Andrew Staron, a theology teacher at Regis Jesuit High School in Denver, has a small liturgy each Sunday with his wife and children. Dr. Staron and his wife had been worried that a livestreamed Mass would be “more passive than anything else, just like watching TV.”

Instead, the family lights candles and sits in the living room, prays an opening prayer, and has “some kind of penitential moment.” They take turns reading that Sunday’s Scriptures, then reflect on them together. Dr. Staron said his children told him they liked being able to ask their questions during the liturgy instead of waiting until after Mass. While Dr. Staron hopes to return to Mass soon, he wants to keep some parts of his family’s new tradition going.

Indeed, the innovation begun during this time of the pandemic is, as Ms. Mehta said, only the beginning of the creativity needed for the church to reach people who are often overlooked. What began out of tragic necessity might well play a key role in the church’s growth and development in the future.  Published in America – The Jesuit Review

A mystic in action

Most impressive in Mother Teresa's spiritual profile, who was declared saint on September 4, is her visible sense of compassion, selfless attention to others, bubbling enthusiasm, and unfailing…

No strangers to natural calamities, Mexicans once again had to pull up their human resources to face head-on the latest devastating earthquake that brought the country to its knees. In times of…