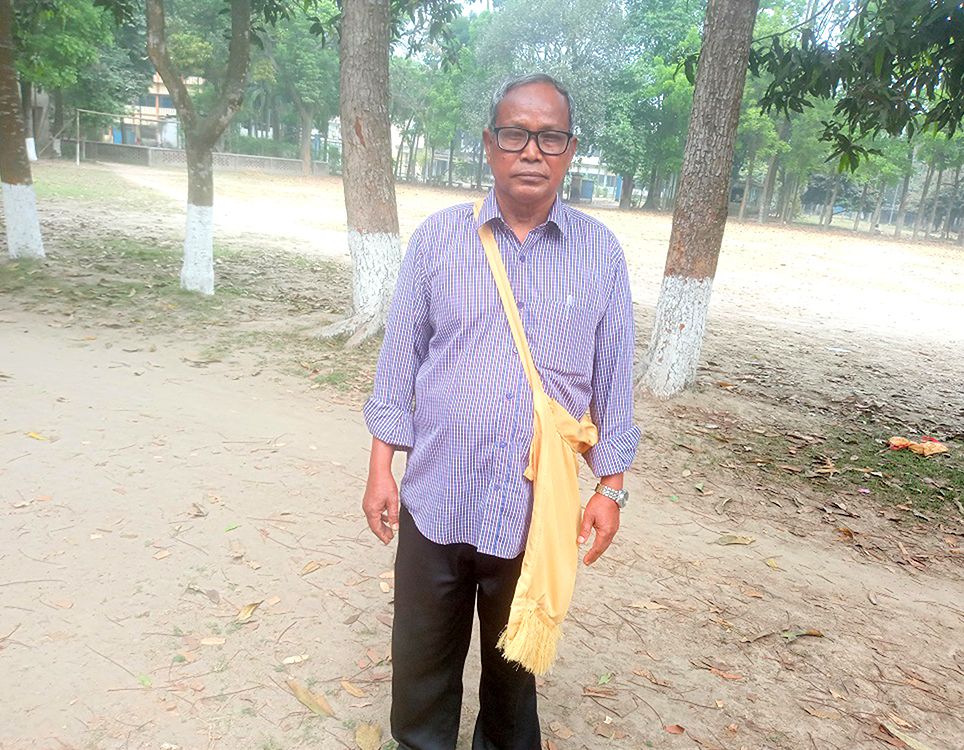 Catechists are a hidden but essential face of the proclamation of the Gospel in Asia. Patrash Soren, 72, is an example of that. He goes from village to village, preaching and preparing children and adults for their baptism.

Patrash Soren, from the Diocese of Dinajpur, still goes from village to village to preach the Gospel and prepare others for their baptism. Among the tribal people, “There is a great opportunity to touch the hearts of non-Christians”, many of whom “love our way of life, our culture, and Christ’s teachings,” Soren explains.

Born into a Baptist family in India, he and his family moved to Bangladesh when he was two. Later they became Catholics. For 47 years, Soren served as a catechist in Bangladesh. “I started my career as a catechist in 1975 with a monthly salary of 900 taka (US$ 9.60). I brought God’s message to thousands of people and many of them received it. Preaching the Gospel gave me immense pleasure.”

An ethnic Santal, the father of six (four daughters and two sons) began as a teacher at the Novara Primary School in Suihari, Diocese of Dinajpur, northern Bangladesh. Eventually, he left this job for a life as a catechist, to preach the faith directly, mostly to tribal people.

“Generally, we reach a village to preach God’s message if we get an invitation,” he explains. Once there, “We teach them the catechesis, hymns, and the Holy Bible for at least three years.” But there is more. “We involve them in church activities. Presently, we have catechumens in 44 villages in the parish of Suihari, where people are preparing to receive baptism.”

The Diocese of Dinajpur has 18 parishes and each has several villages with their own catechumens. PIME missionaries were the first to preach the Gospel in this region of northern Bangladesh. Some PIME priests together with the Missionaries of the Immaculate are still present, but most of the preaching is carried out by local catechists.

Touch The Hearts Of Non-Christians
“In this area, there is great opportunity to touch the hearts of non-Christians who want to receive the baptism,” Soren explained. “I asked some why they want to join us. They told me that they love our way of life, our culture, and Christ’s teachings,” he added.

“We never promise them that if they receive Christ, they will get some favors. Yet tribal people are coming to us and asking to receive baptism. If we see that they are eager and sincere and regularly attend prayers and Sunday Mass, after at least three years of teaching and preaching, we baptize them with the help of the bishop and local priests.”

Soren reports that more than 100 tribal adults had been baptized this year thanks to catechists’ efforts and preaching. “We have 32 catechist nuns, 20 full-time paid catechists and more than 50 prayer leaders, who play the main role in winning the hearts and minds of new believers. Our main achievement is that seeing the life of new believers, other non-Christians also want to receive Christ.”

Great Demand
Soren retired five years ago, but he is still active. In addition to preaching, he teaches new catechists. But this can be a challenge. “Nowadays young people are not very interested in becoming catechists. But there is great demand for them in the Catholic Church of this country.

“Priests and bishops cannot do everything, but we catechists can live with people in the catechumens’ village and be with them as witnesses.” Even though Muslims represent 90 per cent of the country’s population, the elderly catechist says he never faced any threat from Islamic radicals.

“Instead of threats I received support from Muslim brothers who watched us as we transformed the lives of tribal people. They saw that by receiving Christianity they abandoned bad habits like alcohol or nature worship.” Soren remembers with great emotion 1976 and 1977, when many Hindus received the baptism. “Now that I reached the last stage of my life, I think I can say that I have had a wonderful life as a missionary, preaching the message.”

This “was my vocation. God called me to it. As I worked for God, he also gave me plenty of blessings. I see this every day in my children’s lives.”  Published in AsiaNews

How Parishes Are Facing The Pandemic

The COVID-19 pandemic has affected people and institutions, including the Church. Parishes that are not so financially viable, especially in far-flung areas, are grappling with a volatile scenario. In…

The Gospel in the marketplace

The 19th-century Industrial Revolution caused the social question which is the exploitation of the urban masses. Karl Marx and the Communist movement were the first to acknowledge the impact of the…

“Renewed servant-leaders for the New Evangelization” – this is this year’s theme dedicated to the Clergy and Consecrated Persons. The Church aims towards a renewal of priests and religious who are to…