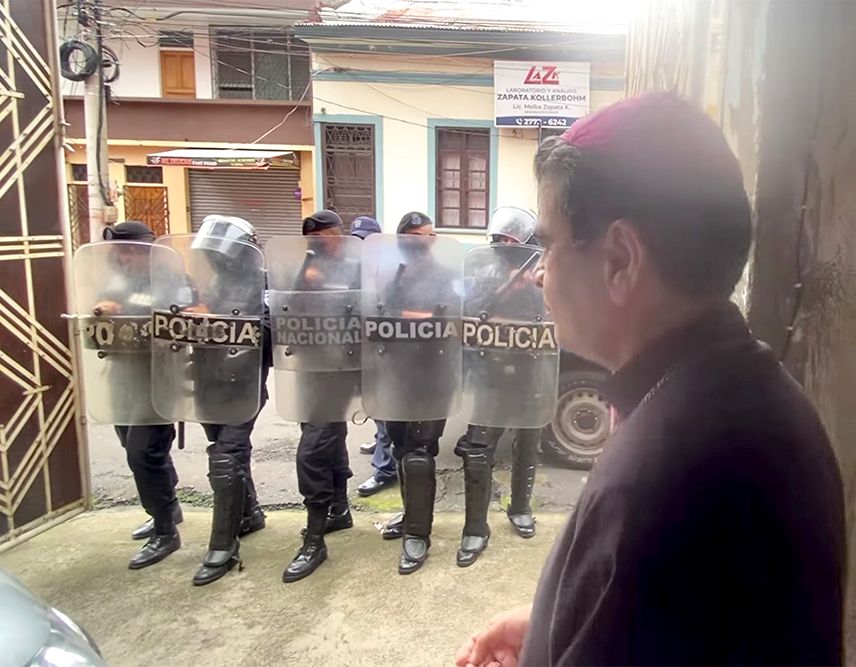 Faced with an escalation of repression, the Church continues to use its parishes and pulpits in defense of the oppressed. For this, it is paying a high price with continuous harassment of spiritual leaders and direct attacks against infrastructures.

In 2018, just hours after popular mobilization against a controversial social security reform began, religious leaders in Nicaragua called for violence to be avoided but were faced with an escalation of repression. Soon, “parishes were opened to welcome victims of attacks by police and Sandinista sympathizers,” recounts Diego, a university professor and researcher, himself a Catholic activist in the opposition.

“The Church has validated the protests by recognizing the demands of the demonstrators as fair,” Diego pointed. “In a country with a Catholic tradition such as Nicaragua [in 2019, 43% of the country’s 6.6 million inhabitants still claimed to be Catholic and 41% declared themselves Protestant], the definitive message of the priests and bishops had a huge effect as it gave the mobilization greater legitimacy and motivation.”

President Ortega and the Sandinista Front invited the bishops to mediate negotiations with the demonstrators, says the Nicaraguan academic.

“The process accelerated to such an extent that the demonstrators began to demand democracy and justice, not just the repeal of the plans for social security. The bishops promoted this agenda, and democratization became a central theme of the negotiations.”

Turning Point
As time went on, the negotiations failed. “The bishops criticized the enormous lack of will of the government delegates, but also the lack of moderation of the opponents, who wanted rapid and, perhaps, unworkable changes.” Meanwhile, the Sandinistas accused the Church of supporting a ‘coup attempt’ against Ortega, “relegating it to the position of ‘witness’ with no right to intervene in this ‘national dialogue.’”

About the role of the Church, in general, bishops, priests, consecrated women and men supported the demonstrators. However, there were specific cases in which some [priests and prelates] moderated their criticism or openly supported the authorities, inspired by their sympathy for the [Sandinista] party and by significant concessions made to their parishes and dioceses.

In any case, the Church “began to pay the price for its involvement with the demonstrators as soon as the protests began,” Diego points out. For example, “there is evidence of constant harassment of spiritual leaders, spying on religious services, restrictions on visas for foreign missionaries, reduction of subsidies for Catholic works (such as schools and social programs), direct attacks against infrastructure (such as the desecration of temples) and on the integrity of clerics (some of them injured).”

Increased Repression
Last year, Ortega called the bishops “children of the devil,” “terrorists,” and “foreign agents,” accusing them of propagating a “false Christianity.” He even ordered a police booth to be placed in the street in front of the residence of the cardinal and archbishop of Managua, Leopoldo Brenes Solorzano.

“The actions against the Church draw attention for their symbolic, political and social power,” Diego says. “Each attack on the Church demonstrates the lack of restraint by the authorities in the reprisals against all opponents. It is not correct and it is simplistic to say that since 2007 there has been an alliance between the Catholic bishops and Ortega, just because the government banned therapeutic abortion. The Church in Nicaragua has always viewed Ortega with suspicion, and there is ample documentation and solid evidence in this regard.”

“Today, far from becoming demobilized in the face of increased repression, the Church has transformed its struggles by adopting a new approach: it is still a critical voice, but it has shifted its field of action to a domain where it can more easily defeat the authorities.”

And what domain is this? Despite explicitly forbidden demonstrations in public space, “priests continue to admit this type of protest in churches,” Diego assures. Likewise, “influential priests and bishops persist in their criticism of the political system,” while “pastoral letters, tweets, communiqués and Sunday sermons in the pulpits denounce authoritarianism and highlight the need to give Nicaraguans a voice and rights.”

“Lay Nicaraguans also turn to the liturgy to protest. Symbols of resistance are often used, for example, on altars to the Virgin Mary.” After a fire destroyed a venerated Crucifix in the Chapel of the Blood of Christ in Managua, Cardinal Brenes condemned a “premeditated terrorist attack.”

The prelate left the burned image “as an eloquent symbol of aggression against the Church,” Diego stressed, noting that “this kind of language is subversive by nature and encourages Nicaraguans (who understand it perfectly).”

The Church “is obviously cautious, trying to avoid repression and frontal accusations, but it continues to influence, and not only symbolically,” Diego says.

“Several priests organize meetings of opposition groups in their parishes and communities, while others facilitate the exile of young people persecuted” by a president who still identifies as Catholic [in 2005, Ortega and his companion of many years, Rosario Murilo, were married by the Church in a ceremony presided over by the late Cardinal Miguel Obando y Bravo], but who has moved closer to neo-Pentecostal evangelicals-the fastest growing religious group-in a “strategic alliance purely for political purposes.”

Change has come and the Church in Asia is gradually overcoming the shortage of priests. Bangladesh, Indonesia, Vietnam, and South Korea are witnessing a flourishing in vocations and seminaries with a…