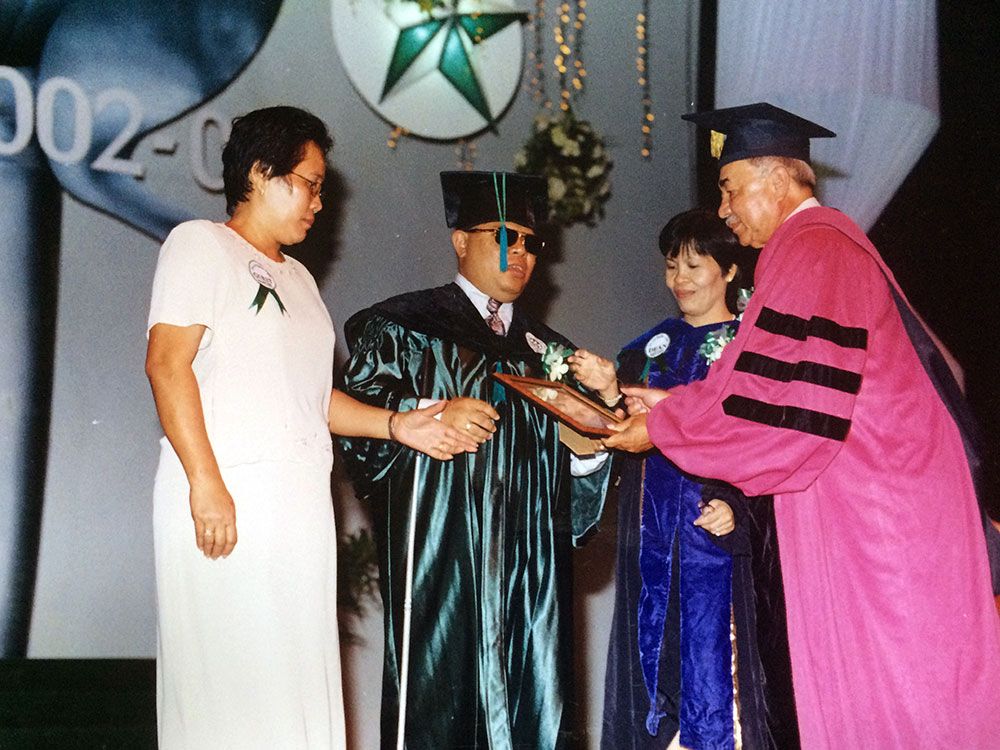 Being born sans material wealth is challenging enough yet being born deprived of senses is way tougher. But for someone who was born blind, Ronnel del Rio grew up teeming with vision. What he lacks in eyesight, he makes up with will power.

While poverty or mere apathy would stop people from dreaming big, del Rio did not let his disability limit him in life. Unlike most of his peers who would feel content earning a living through alms, del Rio would set high goals and reach for them. In fact, he is now looking at pursuing a doctoral degree after being considered as the first blind Filipino to have earned a graduate degree. At 48, del Rio has a master's degree in Management Technology from the University of La Salle in Lipa, Batangas, a province 90 kilometers south of Manila.

But make no mistake about it: del Rio's ascent to the academic ladder was not easy. Obviously, del Rio had more challenges to face than an average student in order to go through elementary, high school, college, let alone, graduate school. Before he obtained his bachelor’s degree in Social Work from the Philippine Christian University, del Rio said he had to massage at least two patients every day to secure his allowance for the following school day. Despite securing a scholarship to fund his college tuition, he still had to work and study at the same time to afford the expenses of going to school.

“My relatives on my mother’s side served as my motivation to make it through college. Every single one of them obtained a bachelor’s degree and I took it as a challenge to follow their example,” he said.

He may be a social worker by education but del Rio is a journalist by profession. His love for radio brought him to the field of broadcast journalism. His passion for radio was so intense, he always says that radio is the blind man’s best friend.

“By profession, I am a registered social worker. Part of social work is advocacy and media is a good channel to air your advocacies. That is why social work through media is a perfect fit,” he said.

Del Rio debuted with a public service radio program called “Tipanan sa DZRB” (Rendezvous in DZRB). Its maiden broadcast was aired over Radio Balisong DZRB 531 in October 1994. Then in 2005, he defied odds and ventured into print media. With the help of his personal assistant, Maricel Manalo, del Rio continues to write as a regular columnist for Sun Star People’s Courier Batangas.

Del Rio’s public service programs registered an impressive following in the province of Batangas and across Southern Luzon region, particularly in Mindoro, Romblon and Quezon province.

Del Rio, who marked his 22nd year in the media profession this year, did not only discuss socially relevant issues on his radio program and column. He also used media as a platform to voice out the concerns of the voiceless and to publish the issues relating to the nameless in society. At one point, particularly in 1995, he convinced former Batangas Congressman, now Senator, Ralph Recto to allocate government funding for the reconstruction of the provincial school for Special Education (SpEd) students.

“I sent a proposal to then Congressman Recto and that led to the construction of building for SpEd students with disabilities. The old one was dilapidated and it was not given priority in the provincial government budget so I had to lobby for him to allocate funding,” he recalled. Within months, del Rio said, funding was secured and renovation of the school for disabled children began.

Just when people find striking a balance between family and work impossible, del Rio trumps all assumptions. Aside from raising his four children and hosting daily public service programs, del Rio even tried to enter the field of politics. He ran for public office in 1998 but he lost the race for a council seat in his native Lipa City. Little did he know that his lost bid would pave the way for yet another opportunity: a graduate school scholarship from Congressman Recto.

“He offered a scholarship but it took me some years before accepting the offer,” he said. “In 2000, I started graduate school in De La Salle Lipa University. With the help of Maricel, I was able to take on full load in graduate school and graduated on March 22, 2003.” Recto, as part of the scholarship offer, hired Manalo as del Rio's personal assistant since 2001.

“Since I was studying management, Congressman Recto suggested that I apply my learning by joining the local government, headed by his wife, Vilma Santos,” he said, referring to the actress-turned-politician.

“Upon their invitation, I joined public service. I started as an executive assistant for livelihood, then I became the urban poor affairs officer who handled affairs of the informal settlers,” he said.

Del Rio may not have been an elected public official but he delivered public service even without the mandate. He was appointed a housing and homesite regulatory affairs officer. During his stint as the province’s housing czar, del Rio’s work was instrumental in relocating informal settler families previously residing along government-owned railroad tracks in Batangas. Under his Villa sa Riles (Villa on the Tracks), a viable socialized resettlement program for informal settler families, Del Rio was able to award lands to at least 1,500 households. At the same time, 150 families were given livelihood assistance under his leadership.

An opportunity to give back

Managing a family, working in government, and being a journalist take most of del Rio’s time but he doesn’t seem to run out of energy. Despite his hectic schedule, he still finds time for his advocacies. Advancing PWD (Persons with Disabilities) concerns is as normal as breathing to him. This advocacy placed him in a key position in the PWD community not only in his province but across the Philippines.

The interview for this article came at a time when del Rio was in Manila for a meeting with massage industry players. Among the attendees, only del Rio was visually impaired.

“I was a masseur myself,” he pointed out. “I survived college with the income I got from this work. And I wish to give something back to the massage industry, specifically, to the visually impaired whose livelihood options are very limited.”

Despite his hectic schedule in Lipa due to the transition requirements of the changes in provincial government leadership, del Rio attended the out-of-town meeting to represent PWDs—even if that meant spending his 48th birthday away from his family.

“I am getting old. I am working to push for advocacies for the sake of the younger generations of PWDs so that, eventually, we could live in harmony with our abled counterparts,” he said.

“I know it would take a lifetime but I wish to see our sector in a better place before I go. It would be a dream come true for me to see them transform their attitude from mendicancy to that of an entrepreneur,” he added.

According to del Rio, persons with disabilities should no longer be considered as patients but as stakeholders just like their abled counterparts.

“The Bible doesn’t say pity the blind. In the New Testament, Jesus even said persons with disabilities are vessels that show God's greatness and glory. We are Christ’s ambassadors on earth,” he pointed out.

Until government realizes its responsibilities to the sector, he said his work continues.

“My greatest dream is to see society’s transformative shift in dealing with PWDs and to see my fellow PWDs able to assert themselves and be responsible at the same time,” del Rio shared.

With the kind of life he is leading, del Rio is more than a role model. He is an inspiration to disabled and abled persons alike to pursue their passions and dreams regardless of difficulties and limitations. But from time to time, he also gets inspiration from others.

“During a Rotary Club meeting I attended in Bangkok, Monthian Buntan, a blind senator from Thailand, said: ‘I’ve given up on giving up’ and it inspired me. At times when we just want to give up, we need to be reminded that life is God’s gift to us and what we do with it is our gift to Him,” del Rio said.

“But most of all, God inspires me. If God is not in my life, I would be totally wrecked by now. I won’t achieve anything or reach any place without His guidance. We plan, but it is the Lord that disposes,” he added.

The Lord truly does. And del Rio hopes that God will also let him fulfill yet another dream of his: to manage his own radio station.

In the 19th century, violent rebellions against the colonial government involving Church personnel broke out. They were motivated not by insubordination but by strong, legitimate demand for equal…