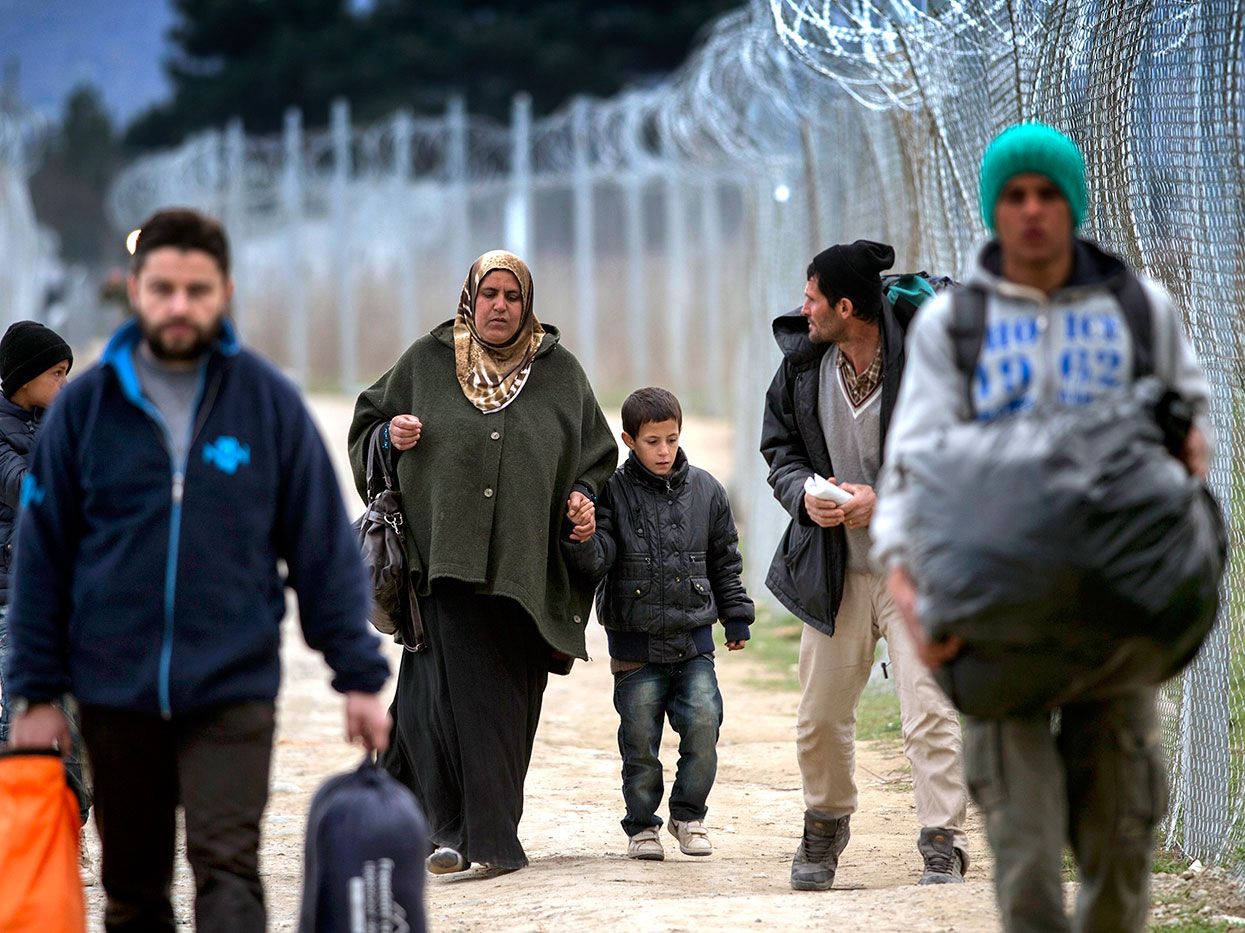 Small, yet leading by example

While Portugal has more than doubled its quota to accommodate refugees, other E.U. countries are building fences and sealing off Europe’s internal borders. A deal with Turkey to secure this closure has been criticized as a moral failure.

A quote by William Arthur Ward: "The pessimist complains about the wind; the optimist expects it to change; the realist adjusts the sails," decorates a room where Rui Marques welcomes visitors at Padre Antonio Vieira Institute (IPAV) in Lisbon. It is also a life motto to the coordinator of the Refugee Support Platform (PAR). And it perfectly describes how Portugal is reacting to the world’s worst refugee crisis since World War II.

Despite being a small country experiencing an economic crisis, Portugal has committed to receiving up to 10,000 refugees. It more than doubles its 4,486 quota under a European Union plan to relocate 160,000 asylum seekers stranded in the frontline states of Greece and Italy.

By June, Portugal has taken in 417 refugees, mostly Syrians, Iraqis and Eritreans. Initially small, due to bureaucratic and logistical difficulties, the number of arrivals has been growing every week. The country is already the second largest host, after France (735), under the E.U. Relocation and Resettlement Program.

“It’s a great effort if we bear in mind that, altogether, 28 E.U. countries have accepted to relocate only 7,000 refugees [of the total number of 160,000],” says Rui Marques in an interview with World Mission.

“Portugal had all the excuses to close the door: a distant geographical location, high unemployment, and the fact that there are no Muslim communities here like in Germany, for example. In spite of our limitations, we have been very pro-active and available. We have set in motion the ability to put ourselves in others’ shoes.”

PAR is one of the five Portuguese organizations involved in this national endeavor. It operates like a broad network with 300 members comprising foundations, universities, companies, and municipalities, more than 100 members who are host institutions, and 8,000 individual volunteers.

Refugee families, as the “most vulnerable,” are PAR’s priority, says Rui Marques. Host institutions offer each family free housing and access to education, work, medical treatment, and a monthly stipend to buy their food, medicine, for transport, and telecommunications.

Despite proposals of financial compensation, too many countries are closing down some of the paths used to get people into the E.U.

Hungary has built razor-wire barriers on its borders with Serbia and Croatia. Austria erected a four-kilometer fence at the Slovenian border. Macedonia, Croatia and Slovenia are imposing harsher restrictions.

Rui Marques is proud of Portugal’s “example of European solidarity.” But he worries that it might be hindered by a controversial E.U.-Turkey refugee deal approved last March.

The arrangement was praised by Germany as “a humane alternative to sealing off Europe’s borders.” It offers President Recep Tayyip Erdogan €6 billion and political concessions, such as visa-free travel and negotiations for E.U. membership, if his government takes back refugees who reach Greece via Turkey.

Nearly 1.1 million refugees entered Germany last year. In April, after the deal was put in place, only around 16,000 arrived, a smaller number when compared with the 120,000 that reached the country last December.

Arrivals through Greece have also dropped from 26,971 in March to 3,462 in April. But more asylum seekers, primarily from Nigeria, Gambia, Somalia and other Sub-Saharan countries, are now making their way to Italy (9,149 in April), U.N.H.C.R. figures show.

“The refugee routes are changing but they don’t stop,” cautions Rui Marques. “I firmly support cooperation with Turkey but the deal [with President Erdogan] provides an ill-fated compensatory package. Europe should not reward good behavior. Our values should be more important than our interests. The agreement is failing. It was a lost opportunity.”

Turkey is not complying with the promises made to the European Commission to guarantee temporary protection to refugees returning from Greece. “Some have been arbitrarily arrested while others were detained for begging on the streets or selling tissues,” reports the Turkish human rights organization, Mülteci Der, as quoted by Spiegel Online.

“The Pakistanis, Afghans and Algerians, who were deported from the islands of Lesbos and Chios in early April, were almost all sent to a detention center in Kirklareli on the Turkish-Bulgarian border.”

Greek officials scaled down the procedures to send refugees back to Turkey, alleging that Turkey “is not a safe third country,” Amnesty International added fuel to this claim denouncing that “hundreds of refugees” have been forcibly deported from Turkey to Syria. Others were shot by troops at the Syrian-Turkish border.

Rui Marques refuses to condemn Turkey’s overcrowded and unsanitary confinement camps. “We have to look first at European camps, where children have been detained in dreadful conditions. There are horrifying stories about refugees being abused by traffickers. We need to be coherent and look at our own actions” before criticizing a country already holding 2.5 million refugees.”

“The E.U. assistance to Turkey is five years late,” he says. “We pretended for too long that it was not our business. We have been distancing ourselves from our values, embracing nationalism, which is the last station before war. We ignored how people were prepared to risk everything – to risk their lives.”

One of the most appalling “European camps” is Idomeni, a Greek port city. Refugees “are losing hope that they will be able to join their families or find places to live in peace,” informs Doctors Without Borders/ Médicins Sans Frontières (MSF).

“Following the closure of the Balkans’ route to Europe, thousands of refugees are stranded, exposed to violence at the hands of border police or smugglers. Babies, as young as six weeks, have been treated for exposure to tear gas and ten-year old children for rubber bullet wounds.”

“Some of these children were born on European soil, others have been displaced for months, some for years,” says Emmanuel Massart, MSL field coordinator in Idomeni.

“Europe has decided to stop thousands of people from moving through Greece but it did not properly plan how to address their basic needs. This was a fully predictable crisis caused by the deliberate neglect of European governments and institutions.”

“Near the Albanian border, in Ioannina City, the Katsikas military-run camp hosts 1,500 asylum seekers who spend their days in the heat and freeze at night,” says the aid group. “They sleep in tents without mattresses and have nothing to keep warm on the cold, hard, and rocky ground.”

Due to the “squalid conditions” in Greece, MSF will no longer take money from any E.U. governments and institutions. This protest decision will cost the organization €60 million.

“For months, MSF has spoken out about a shameful European response focused on deterrence rather than providing people with the assistance and protection they need,” says Jérôme Oberreit, MSF’s international secretary general.

“The E.U.-Turkey deal goes one step further and has placed the very concept of ‘refugee’ and the protection it offers in danger. We are calling on European governments to shift priorities: rather than maximizing the number of people they can push back; they must maximize the number they welcome and protect.”

Since his election as Bishop of Rome, mercy has been the hallmark of Pope Francis’ pontificate. It seems, however, that the Holy Father has to expend a great deal of energy to demonstrate what true…