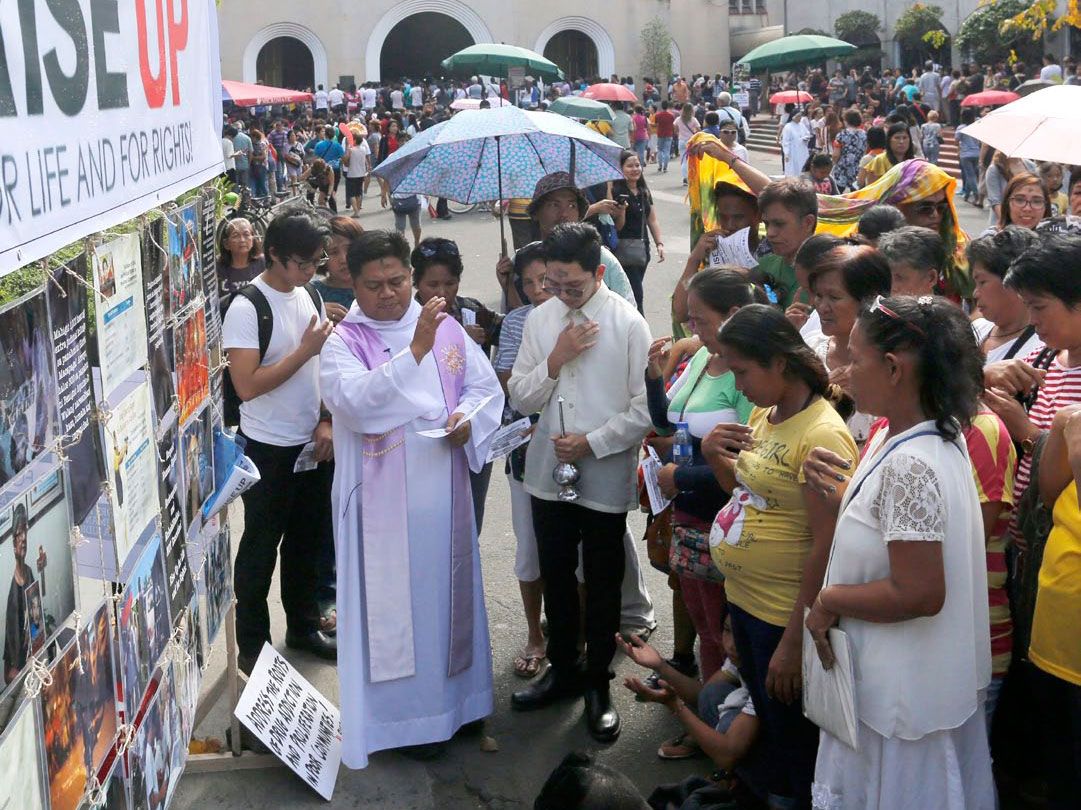 As the bloody campaign against illegal drugs and crime continues under the present administration, the Church in the Philippines is addressing the mounting mortality by establishing community-based drug rehabilitation programs as a form of compassionate care and systematic intervention in order to reduce those who are being killed.

Not since the Marcos dictatorship has human life in the Philippines been so gravely under threat from government policy. Since June 30, 2016, a bloody campaign against drugs and crime, urged on by President Rodrigo Duterte, has wiped out thousands of lives, mostly of the poor. Almost every night in major urban centers, drug suspects are slain in the streets or in their homes, sometimes along with innocent bystanders, friends, or family members.  The Philippine National Police (PNP) has claimed responsibility for more than three thousand of these killings. Even more have been committed by unknown assailants posing as anti-crime vigilantes.

Bishop Pablo Virgilio S. David, the incoming vice-president of the Catholic Bishop’s Conference of the Philippines (CBCP), heart-stricken by the mounting mortality in his Diocese of Caloocan, which he calls “the killing fields of the country,” was one of the first Catholic bishops to denounce the violence.

The Church is at pains in addressing the continuing slaughter of drug suspects. One reason is that the policy is not implemented through legislation but through internal action or inaction on the part of the PNP, and through signals sent to the police, and possibly to self-styled vigilantes, by the PNP leadership and the president.

Another difficulty is that much of the killing is perpetrated by “unknown assailants” whose links to the state cannot be easily established. In the absence of undeniable evidence of this link, all that can be asked of the PNP is to reduce the number of suspects killed in its own operations and to press for more efficient investigation of the “deaths under investigation” (DUIs).

Ministering to the victims
The Church’s most systematic intervention to date has been the establishment of community-based drug rehabilitation programs, viewed not only as a form of compassionate pastoral care, but also as a way of reducing the numbers killed.  Three dioceses have launched such programs: the Salubong Program in the Diocese of Caloocan; Abot-Kamay Alang-Alang sa Pagbabago (AKAP) in the Diocese of Novaliches; and the Sanlakbay Program in the Archdiocese of Manila.

Each program draws upon the expertise of professional psychologists and counsellors, including the Psychological Association of the Philippines (PAP), the Center for Family Ministries (CEFAM) of the Society of Jesus and the psychology departments of Catholic schools such as Miriam College, De La Salle University, and the Ateneo de Manila.

Each uses Church volunteers and involves others in the community in various program components, including representatives of other faiths.

A typical rehabilitation program has three components: patient care, family care, and community care. Patient care is directed toward healing the individual drug user and equipping him or her with life and livelihood skills. Family care includes counselling for families of drug users, food subsidies while they attend the programs, subsidies for the children’s education, and livelihood training. Community care tries to organize and strengthen the community against the drug trade, in collaboration with the local government unit (LGU) and the police.

Fr. Antonio Labiao, Vicar-General of the Diocese of Novaliches, is convinced that such rehabilitation programs can reduce the number of deaths in police or other operations.

Culture of human rights
A second kind of preventive intervention that the Church has initiated hopes to strengthen the defense and the culture of human rights. Bishop David is working for the establishment of human rights councils for the cities of his diocese, with the help of Loretta Ann Rosales, who formerly chaired the Commission on Human Rights. He envisions the councils as platforms for rights education and as clearing houses for reports on rights violations, and as venues for the collaboration of LGU representatives, human rights organizations, other civil society organizations and religious groups.

The Archdiocese of Manila’s Public Affairs Ministry is working with the Commission on Human Rights on an education program for schools, parishes, and urban poor organizations, including the production of videos on various aspects of human rights. The Ministry’s director, Fr. Atilano G. Fajardo, is quick to point out that the problem is not with people unaware of their rights, but with human rights violators.

Support to the families
The Church is also supporting families of the slain – or as Fr. Labiao calls them, “orphaned families.” Bishop Pabillo points out that with thousands killed, there must be tens of thousands of the bereaved. Their needs are numerous: for trauma debriefing and counselling, funeral expenses, food and other basic expenses, livelihood, scholarships and school expenses for orphaned children, legal aid if they wish to file cases, sanctuary and resettlement when threatened by the killers or fearful they will be “next.”

Among the first Catholics to respond to the needs of orphaned families were the Redemptorist priests of Our Mother of Perpetual Help in Baclaran, in the Diocese of Parañaque.  The Redemptorists raised a large fund to help with funeral expenses.  It was quickly exhausted. They have created occasional income opportunities for family members who participate in the development and maintenance of a public exhibit on the killings. The Redemptorists are partners of RiseUp, an ecumenical network which provides counselling, material assistance, and sanctuary for families and fugitives. Holy Eucharist-Mass Action (HEMA), a lay-initiated group, extends financial help to the families.

The Diocese of Novaliches offers counselling, livelihood training, and money for schooling and clothes.  Caritas Manila, the social action arm of the Archdiocese of Manila, has dedicated part of its funding to help orphaned families.

Prayer for the dead
A fourth intervention is the prayerful or liturgical commemoration of the dead.  This commemoration aims not only to give comfort to the families but also to keep alive public awareness of the killings, to cultivate compassion for the victims and their families, and to send the message that the killings are not exempt from moral judgment. Perhaps the first of these was a Mass on July 25, 2016, coinciding with President Duterte’s first State of the Nation Address and organized by the Public Affairs Ministry of the Archdiocese of Manila at St. Vincent de Paul Church in Adamson University. The Mass, celebrated by Bishop Pabillo and by Fr. Fajardo, was well attended by representatives of religious congregations, students of religious-run schools, and individual Catholics. Orphaned families had also been invited, but were too frightened then to go public.

More successful at gathering the orphaned families was a Mass organized by HEMA at Our Lady of Victory Church in Malabon on February 2.  Although the presider was Bishop Deogracias Iñiguez, emeritus of Caloocan, it was the bereaved who spoke during the time for the homily, telling their stories to an audience of human rights advocates, religious, and other concerned Catholics.  This was followed by a Mass on March 2 at the National Shrine of Our Mother of Perpetual Help in Baclaran, and another on April 2 at Sto. Niño Church in Barangay Bagong Silang in Novaliches, where at that time the death toll had hit 250.

Bishop Antonio Tobias of the Diocese of Novaliches presided over that Mass and delivered a moving homily on the raising of Lazarus. The next day the bishop went to the police station to confront the police.  For weeks after that, says Fr. Sarabia, no one was killed. HEMA plans to hold memorial Masses with the bereaved families on the second of each month, with a Mass on November 2, All Souls Day.

Documenting the killings
A fifth intervention is advocacy. The Redemptorists of Baclaran have set up a memorial exhibit to the killings at their well attended Church, reminding their millions of devotees that true faith demands compassion, denunciation, and action.  Churches all over the Archdiocese of Manila and in other places have put up tarpaulins reminding the faithful that Huwag kang papatay (Thou shalt not kill) has not been stricken from the Ten Commandments.

A final intervention is an investment in the nation’s future. At least one diocese is systematically documenting the killings. The documentation will serve as a dossier which can be eventually used to measure the extent of the slaughter, to file cases against the perpetrators, and to hold those responsible to account.

Catholics who are fighting the Duterte administration’s anti-life solutions to crime  may be a minority now, but they are a powerful minority. Their power comes from moral clarity and compassion, from the support of bishops, from their occupation of strategic institutional spaces in the Church, and from their capacity to work with secular groups to advocate for life and to aid the bereaved. But most of all their power comes from a loving God Who has given life as a sacred gift to all.

Modern-Day Missionaries to the World

Overseas Filipino Workers (OFWs) take and practice their faith fervently wherever they go or are. That is why the Catholic Bishops Conference of the Philippines appreciates the role of OFWs as…

To Play or not to Play?

The psychological need to be in groups, be it virtual or real, plays a strong motivating factor for young people to engage in online gaming. Nonetheless, virtual interaction with others oftentimes…