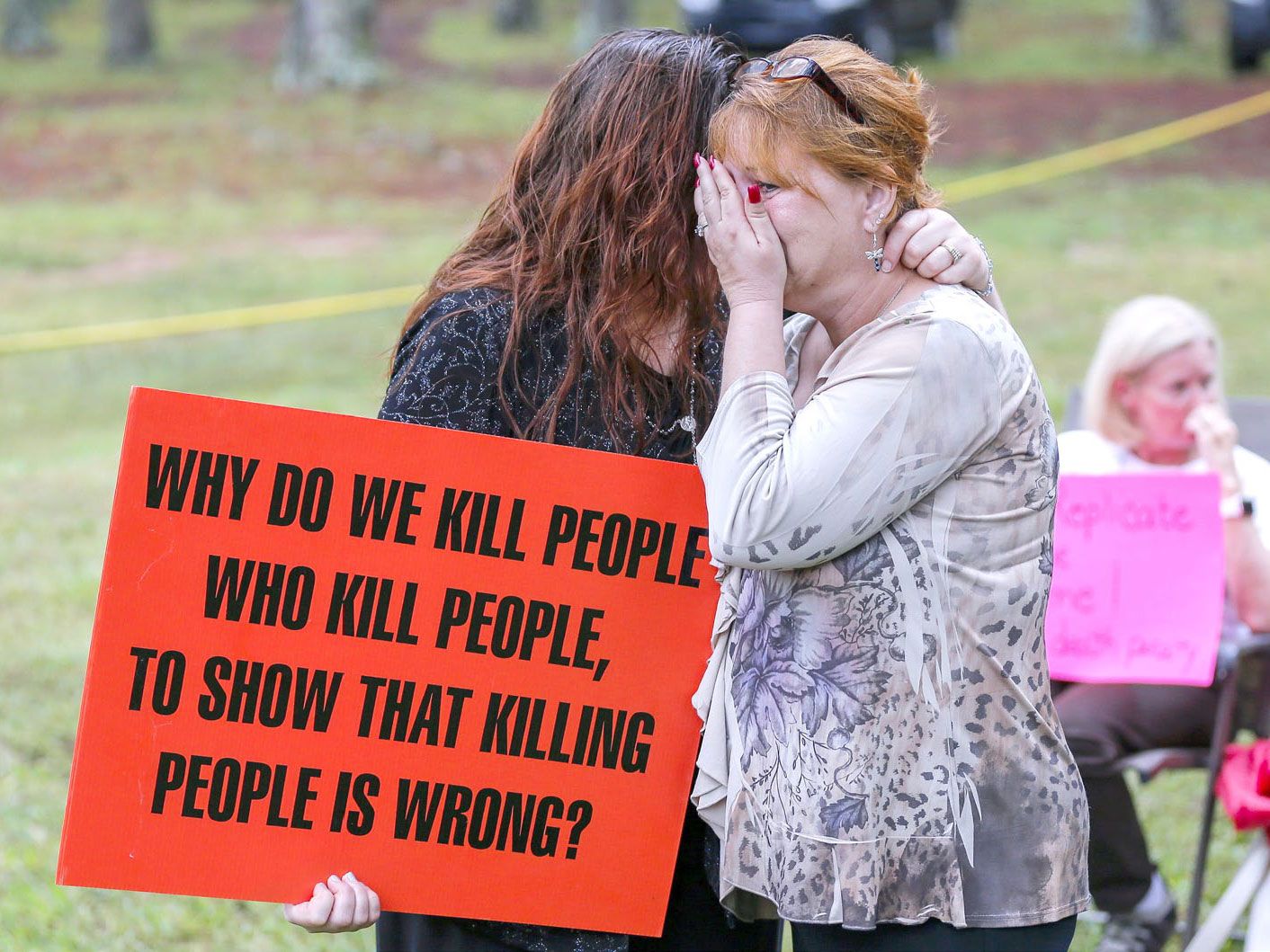 Justice and mercy in a balance

While some biblical texts and the traditional teaching of the Church endorse capital punishment as a deterrent and safeguard of the common good, contemporary Church pronouncements emphasize the dignity of the offender as a child of God and oppose death penalty.

Last June 27, 2017 Auring Carlos, her daughter, Estrella, and three grandchildren were allegedly murdered by Carmelito Ibanez and two others. The kin of the victims have expressed their desire for the restoration of the death penalty in the Philippines (ABS-CBN News, July 5, 2017). What complicates the matter is that Carmelito has retracted his confession, claiming that he was tortured by the police and coerced to admit to the crime. Is Carmelito a fall guy? If the death penalty is restored and he is eventually executed, would we have put to death an innocent man?
In this brief essay, let us examine first what the Bible says about capital punishment, second, what Church tradition has taught about the death penalty, and finally, why the contemporary Church is against capital punishment.

Old testament
Genesis 9:6 says: “Whoever sheds the blood of man, by man shall his blood be shed; for in the image of God has God made man.” There are several other passages from the Old Testament that sanction the Law of Retaliation, such as Exodus 21, 22, 35; Leviticus 20 & 24; Deuteronomy 21-24.
Do these passages mean that the Old Testament unequivocally sanctions capital punishment? First, while several passages endorse capital punishment as penalty for the taking away of life of another, these laws can also be understood as a deterrent to crime, murder particularly, because of the stiff penalty – life as payment for life.
Moreover, these passages cannot be taken in isolation from other Old Testament passages that call for mercy. In Exodus, the Lord reveals His divine name and declares: “The Lord, the Lord, a God merciful and gracious, slow to anger, and abounding in steadfast love and faithfulness, keeping steadfast love for thousands, forgiving iniquity and transgression and sin.”(Exodus 34:6–7)
Lastly, we must also examine God’s treatment of biblical figures which represent us all.  God did not take away the life of Cain for having killed Abel. Instead God sent him into exile and protected him with a mark on his forehead. Neither did God take away the life of Moses for killing an Egyptian taskmaster whom he witnessed beating up a fellow Hebrew; nor did He take away the life of David for orchestrating the death of Uriah, husband of Bathsheba whom he desired.

The law of love
To determine what Jesus would have thought about capital punishment, we can examine some clues. First, His treatment of public sinners. Though the woman was caught in adultery, Jesus redeemed her from being stoned to death. While He did not tolerate her marital infidelity, He forgave and saved her from death. He gave her a new lease in life (Jonh. 8:11).
Second, we can examine His many sayings about God’s love which shines upon the virtuous and sinner alike (Matthew 5:45), the call to forgive seventy times seven (Matthew 18:22), the mandate to become perfect in loving like the Father (Matthew 5:48). For Him to endorse capital punishment would be contrary to His values and convictions and to His revelation of the Father’s love and mercy.
Third, we can examine His disposition towards the Old Testament Law. He explains that He did not come to abolish the Law but to fulfil it (Matthew 5:17). Moreover, while He holds Moses in great esteem, He claims to have greater authority than Moses: “You have heard that it was said… but I say to you …” (Matthew 5:21, 27, 31, 33, 38). Thus while He affirmed Moses’ law of retaliation, He proposed a higher law, the law of love and forgiveness.

Human dignity
St. Thomas Aquinas upheld the right of the government to take away the life of an individual who undermines the common good: “If a man be dangerous and infectious to the community, on account of some sin, it is praiseworthy and advantageous that he be killed in order to safeguard the common good, since ‘a little leaven corrupts the whole lump.’” (Summa Theologiae II-II:64:2)
Eight centuries later, St. John Paul II in Evangelii Vitae (The Gospel of Life) writes: “Today, in fact, as a consequence of the possibilities which the state has for effectively preventing crime, by rendering one who has committed an offense incapable of doing harm – without definitively taking away from him the possibility of redeeming himself – the cases in which the execution of the offender is an absolute necessity are very rare, if not practically non-existent. (56)
What has remained the same and what has changed in terms of Catholic Church teaching on capital punishment?  The Church has always upheld the sanctity of human life. Aquinas sanctioned the execution of an individual in order to protect the lives of the members of the community. One was executed not merely as a form of vengeance, but in order to protect the lives of others.
Second, the Church has always recognized the right of the State to exact the death penalty. Just as an individual has the right to self-defense, so has the State the right to implement the death penalty in order to protect its citizenry.
On the other hand, while the Church recognizes the right of the State to implement the death penalty, contemporary Church pronouncements also underscore the innate dignity of the offender as a child of God which is not lost or merited by one’s actions of moral disposition.  The Catechism of the Catholic Church teaches: “If, however, non-lethal means are sufficient to defend and protect people’s safety from the aggressor, authority should limit itself to such means, as these are more in keeping with the concrete conditions of the common good and more in conformity with the dignity of the human person.”(2267)
By way of analogy, in defending one’s life, one does not need to kill an assailant if one is able to disarm him.  Similarly, the Church maintains that the State need not execute an individual if society can protect itself through non-lethal forms of punishment meted on the criminal, such as reclusion perpetua.
In Evangelium Vitae St. John Paul II concludes that the State, “ought not to go to the extreme of executing the offender except in cases of absolute necessity: in other words, when it would not be possible otherwise to defend society.”(56)
Hence, the Church today holds in tension the responsibility of the State to protect the lives of its citizenry and the dignity of the offender. Only when the common good cannot be served without taking away the life of a criminal should the State implement capital punishment, which Pope Francis has pushed further by unequivocally declaring before the International Committee to be against the Death Penalty last March 20, 2017: “Nowadays the death penalty is inadmissible, no matter how serious the crime committed.”

Catholics oppose death penalty
A question many Christians grapple with regarding the Church’s opposition to the death penalty is whether the Church tolerates wrongdoing, coddles evildoers by opposing their execution and offering them rehabilitation. Is the Church too soft on murderers, rapists and drug pushers?
Pope Francis explains the tension between God’s justice and mercy clearly in The Name of God is Mercy: “This does not mean that we should throw open the doors of the prisons and let those who have committed serious crimes loose. It means that we have to help those who have fallen to get back up.  It is difficult to put this into practice, and sometimes we prefer to shut a person in prison for the rest of his life rather than try to rehabilitate him and helping him find his place in society”.
Justice entails that individuals be held accountable for their crimes; nonetheless, mercy demands that they be treated as human beings. It is easy to wish death upon enemies of the State, such as drug pushers and syndicate members.  It is attractive to cleanse society of criminal elements and give in to hate. It is more difficult to rise to our calling as Christians, to forgive as God constantly forgives us, to offer criminals opportunities to make amends and to reform as God ceaselessly renews and heals us.

Eduardo and Susan Loya have been married for 33 years in a conjugal love that God has blessed with three children, all of them now professionals. World Mission spoke to this committed couple who…

The Simplicity Of Christmas

Like the crib, the whole mystery of Christmas–Jesus’ birth in Bethlehem–is extremely simple, and because of this, it is accompanied by poverty and joy, and therefore not difficult to understand by…