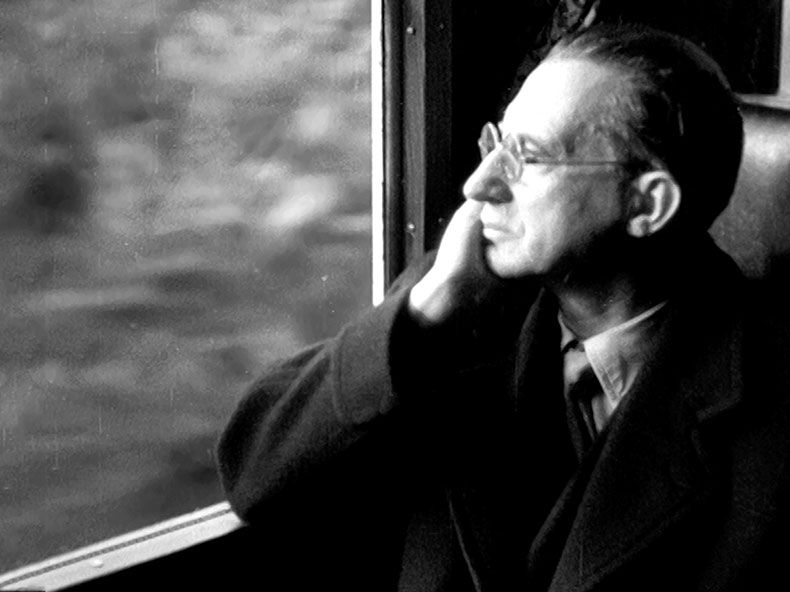 Family man and daily communicant, Alcide De Gasperi (1881-1954) courageously led the Italian delegation at the Paris Peace Conference that concluded World War II in 1946 and guided Italy’s reconstruction as Prime Minister. He is one of the fathers of the European Union. His cause for beatification was introduced in 1993.

"Opening my mouth in this world-gathering, I feel that everything, a part from your personal courtesy, is against me: it is especially my qualification as your former enemy which makes me to be considered as the guilty one, the defendant, having arrived here when the most influential among you have already formulated their conclusions…

“But I have the duty, in front of the conscience of my country and in order to defend the vitality of my people, of speaking as Italian…My position is by four/fifth that of defendant as responsible of a war which I did not do and the Italian people never really wanted and one/fifth that of co-belligerent in the new war we waged side by side with the Allies. Our whole effort aims at reminding the Allies that we have called them so because we have believed that this is what they are.”

These courageous words, Italian Prime Minister and Minister of External Affairs, Alcide De Gasperi, spoke on August 16, 1946  before representatives of the 21 countries gathered at the  Peace Conference in Paris, France.

He said that he had come “hat in hand” and had sustained with virility the humiliation of being made to wait in the ante-chamber for three days. Yet the defeated one came out the winner. Such was the dignity and the moral nobility he showed that in the end he prevailed against all the odds and negotiated good terms for the future of the new Italy.

The Christian statesman came out from the ordeal as a giant and, even in that very trying moment, managed to re-position Italy in the international scene and start very good and lasting relationships with the highest representatives of the European democracies that would become the groundwork for the future European Community.

Politics as a vocation
Alcide De Gasperi was born in Pieve Tesino in Tyrol, which at that time belonged to Austria-Hungary, now part of the province of Trento in Italy. His father was a local police officer of limited financial means. From his adolescence De Gasperi was active in the Social Christian Movement. At 19, he joined the Faculty of Literature and Philosophy in Vienna, where he played an important role in the inception of the Christian student movement.

After his degree in Philology, he started to work as a journalist and politician. In 1911 he became a congressman for the Popular Political Union of Trentino in the Austrian Parliament, a post he held for six years. When his home region was transferred to Italy in the post-war settlement, he accepted Italian citizenship. He however never tried to hide his love for Austria and the German culture and often preferred speaking German to his family, many of whom spoke German as their first language.

In 1919, he was among one of the founders of the Italian People’s Party. He served as a deputy in the Italian Parliament from 1921 to 1924, a period marked by the rise of Fascism. As Mussolini’s hold on the Italian government grew stronger, he soon diverged with the Fascists. In November 1926, in a climate of overt violence and intimidation by the Fascists, the People’s Party was dissolved.

De Gasperi was arrested in March 1927 and sentenced to four years in prison. The Vatican negotiated his release. A year and a half in prison nearly broke De Gasperi's health. After his release in July 1928, he was unemployed and in serious financial hardship, until in 1929 his ecclesiastical contacts secured him a job as a cataloguer in the Vatican Library, where he spent the next fourteen years until the collapse of Fascism in July 1943.

Passion for justice
During the reconstruction years, De Gasperi was the undisputed head of the Christian Democrats, the party that dominated Parliament for decades. Although his control of the party appeared almost complete, he had to carefully balance different factions and interests, especially with regards to relations with the Vatican, social reform, and foreign policy. From 1945 to 1953, he was the prime minister of eight successive Christian Democratic governments.

Decisive were the general elections in April 1948 for the future of Italy. They were heavily influenced by the cold-war confrontation between the Soviet Union and the United States. Fortunately, the Christian Democrats won a resounding victory and the Communists were defeated once and for all.

Although De Gasperi could have formed an exclusively Christian Democratic government, he instead formed a “centrist” coalition with Liberals, Republicans and Social Democrats. “De Gasperi’s policy is patience,” according to the foreign news correspondent for the New York Times, Anne McCormick. “He seems to be feeling his way among the explosive problems he has to deal with, but perhaps this wary mine-detecting method is the stabilizing force that holds the country in balance.”

In domestic policy, a number of social security reforms were carried out by various ministers of De Gasperi’s cabinets in the areas of rents and social housing, health and unemployment, insurance and pensions. He directed the Italian economic boom to the advantage of the many and contributed to create Italy’s successful welfare state.

Founding father of the european union
The Holy See actively supported Christian Democracy, declaring that it would be a mortal sin for a Catholic to vote for the Communist Party and excommunicating all its supporters. In practice, however, many Communists remained religious. Giovanni Guareschi wrote his novels about Don Camillo describing a village, Brescello, whose inhabitants are at the same time loyal to the priest Don Camillo and to communist mayor Peppone, who are fierce rivals.

In August 1953, the seventh government led by De Gasperi was forced to resign by Parliament. He consequently retired from active politics and gave his last year to the European cause.

Alcide De Gasperi is considered to be one of the founding fathers of the European Union, together with Robert Schuman, French minister of Foreign Affairs and Konrad Adenauer, the leader of Germany, a country re-born after the Nazi nightmare.

De Gasperi used to speak of “Our homeland Europe”. He wrote: “At the origin of our European civilization, as stated by Toynbee, there is Christianity. I only want to mention our common heritage, that moral vision which enhances the responsibility of the human person, with its ferment of Christian fraternity, with its cult for beauty inherited from our forefathers, with its will for justice sharpened by the experience of two thousand years.”

Used as we are to the witness of holiness coming from convents or monasteries, we are amazed at the great moral and spiritual stature of a character like Alcide De Gasperi who knew how to embody the Christian faith into the complex socio-political realities of his time. He was passionately fond of the Church's Social Doctrine with its ideals of putting into society the salt and yeast of the Bible’s integral humanism and the centrality of the human person so that the “City of Man” might be the vanguard of the “City of God”.

The highest form of charity
Concretely, politics was for him the highest form of charity in as much as it was the translation of the parable of the Good Samaritan in institutionalized reforms that respond to the needs of the poorest strata of the population. In Alcide De Gasperi politics and spirituality were inextricably intertwined so that the former was offering reasons to the latter.

He wrote: “The first commandment of God in the Bible is a social and cultural commandment: ‘Be fruitful and multiply and fill the earth and conquer it’ (Genesis 1:26).  Conquer the earth with progress, work, arts and sciences. Do not close yourselves in your individual microcosm, says the Creator, but live a social life and dedicate your energies to the earth and the community of men. God has entrusted the world with all its riches to human beings, to their disputes, their efforts for progress, and their search for goodness and truth.”

Conrad Adenauer wrote: “After the war, it was a true blessing for Italy to have entrusted the politics of the country to such a valid person as Alcide De Gasperi. My many encounters with him remain in my memory for the moral and spiritual seriousness of a man to whom I am still very grateful. He has been not only a great Italian but a European of high conscience and as such he will enter world history.”

Alcide De Gasperi married Francesca in 1922, after a courtship during which he wrote very passionate love letters. They had four daughters. The eldest, Maria Romana, is his biographer. On August 19, 1954, he died in Sella di Valsugana, in his beloved Trentino.

It is said that he had to be given a State funeral as he had died with almost no means of his own – a jaw-dropping fact in a country where, even then, politicians were expected to do well for themselves. He is buried in the basilica of San Lorenzo, in Rome. Declared a “Servant of God” by the Roman Catholic Church, he is considered a candidate for beatification together with Robert Schuman, the other European founding father.

First Catholic priest in Soviet Kazakhstan, Fr. Wladyslaw served 13 years of hard labor in a detention camp. Despite persecution, he went on exercising his priestly ministry without reserve, caring…

Silver-haired American nun Dorothy Stang (1931– 2005), who was killed, aged 73, on an Amazon road, looked more like an elderly American holidaymaker than a modern-day martyr. Her death was the…

This is how Jeremias U. Montemayor (1923-2002) was usually called since he was the first graduate of Ateneo Law School to become its dean. Born in a landed family, he sacrificed his position as dean…