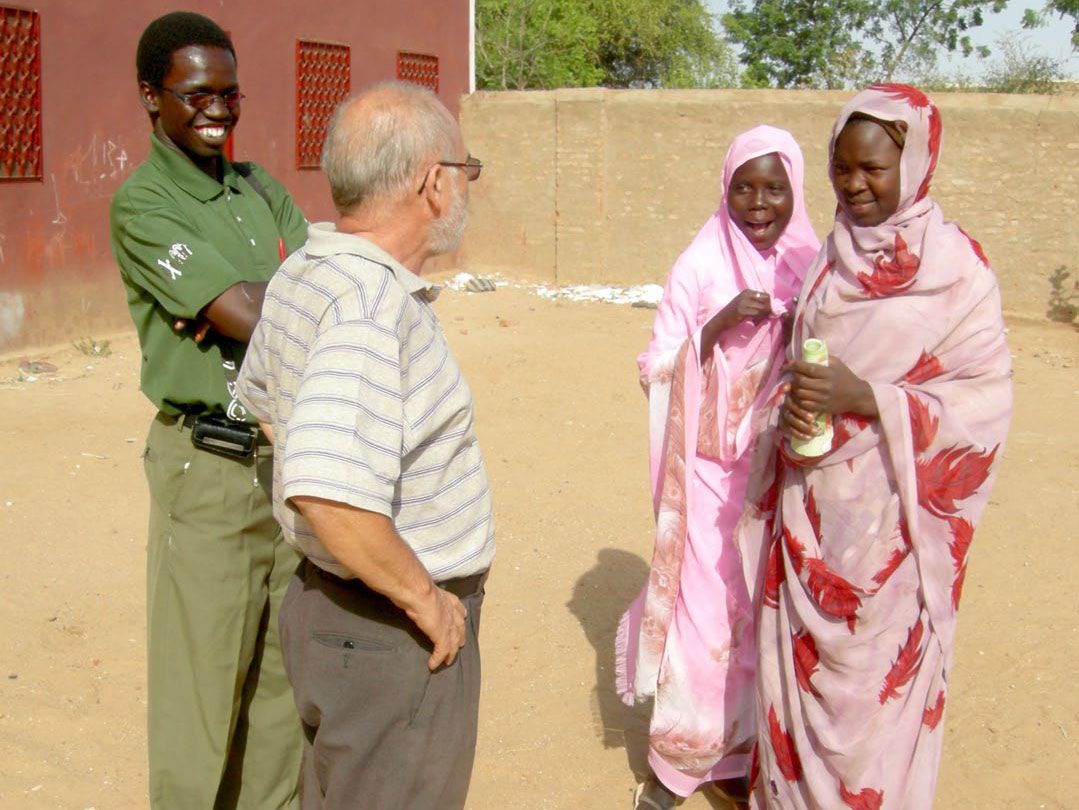 Doing mission work cannot be defined by mere words. In a small city of Nyala, in Sudan, a Comboni missionary discovered what evangelization is all about. He learned about it from the strangest source, a source shunned by many. Yet, his eyes were suddenly opened, and he came to realize that God’s messenger can come in various unexpected and unheralded forms.

I know him by sight. He is the man who can be seen daily in the city of Nyala, busying himself practically the whole day walking streets and alleys, walking without stopping. He’s mentally ill.

That one particular afternoon, near the municipal market, I saw him walking resolutely towards me. Then he stopped and stared at me with a calm and serene gaze. He did not react to my greeting. When I asked what his name was, he answered without hesitation: "Never mind asking me my name, there are more important things in life." Then he put down two large plastic bags full of dirty rags and other garbage that he usually brings with him. He placed his heavy hands on my shoulders and said, “I know who you are and where you live; your house is the church.”

I felt his hands pressing harder and harder on me. There, in the middle of the wide, crowded street, many people stopped, curious or perhaps worried about what might happen to the foreigner that a madman had in his grasp. No doubt, the moment was one of perplexity and some fear for those who saw us. But beyond that, I should add that there was also a certain atmosphere of respectfulness around. It was remarkable and evident the concern of these witnesses who showed the good intention, if necessary, to relieve me of some supposed inconvenience. But when they saw the peaceful and serene scene, they did not intervene.

Just a mental patient
However, the one who all knew to be majnún (crazy), still had something else to say. He looked around, showing that he was in control of the situation. And his voice sounded again. Slowly, almost spelling each word: “You are not cáfir (unbeliever, unfaithful).”

He was already picking up the plastic bags from the ground when I, not yet fully recovered from the beautiful surprise, told him: “Chucran, thank you.” And, confirming his own words, I added: “You are right, my friend! I am not a cáfir (unbeliever, unfaithful); I believe in God; I’m happy with the words you’ve just spoken to me.” I saw his face open in a wide smile, as he disappeared into the crowd.

A few steps away from the scene, I heard a lady saying delicately: “Forgive him, khauaja (foreigner), do not be offended! He’s just a mental patient.” But this was not an isolated feeling: it was joined by other people around in whose faces I saw a timid, wordless smile. At the same time, I thought to myself: “Excuse me? There were certainly no excuses to be asked and, much less, offenses to hold.” To all I returned the nice and delicate gesture. Even the well-known saleswoman in the market noticed a different tone in me which she did not fail to emphasize: “Eh, zabun khauaja (foreign customer) today you come more lively and cheerful.” While she handed me the change for the lentils and other vegetables I bought at her stall, she looked at me and dropped some roasted sesame in my shopping bag. “It is a small and humble remembrance from me; God bless you and always make you happy”, she said with a smile.

Silent witness
Meanwhile, as I walked, I lost myself in thought, only to realize that I was already entering the churchyard. If someone asked me which road I took when I left the market or what I saw along the way, I would not know how to answer. Did I lose my memory? No, and I am sure of that. The proof is that I can literally reproduce the details of those more or less twenty minutes that had passed since I left the market.

But let me tell you the truth right away. As I walked, a monk from a certain distant monastery appeared to me. Because it was in his company that I spent that little bit of time. The heart of our conversation is summed up in the following advice I received from the holy man of God: “If you want to progress in the inner and spiritual life, pray this everyday: “Lord, I am here waiting for nothing!” He noticed my confusion and perplexity, but he insisted on the same idea, taking nothing away from what he had said.

I do not remember where I read or who told me this brief reference of the monk, but it is not a fable nor a mythological story. Nor was it invented for that moment. One might even compare it to a ‘cheap’ philosophy. But I have taken his words seriously, which in turn have had a very emblematic meaning in my missionary life in Nyala, Darfur.

Here, the Christian community is an extraordinary minority, especially after the departure of most Christians at the time of the independence of South Sudan in 2003. It is a mission of small numbers (baptisms). A mission in a Muslim-majority country where evangelization is not done in a direct and traditional way.

In our mission of Nyala, social activities such as health and education are the means through which the church has been ensuring a service in favor of the poorest and the most needy of the population. A mission of presence and silent witness, without uproar or colorful manifestations, without being seen. A mission where consolations or ‘spiritual caresses’ are not expected.

These are some characteristics of evangelization in these parts of the globe. The first and the greatest consideration to keep in mind is that the mission, more than mine or ours, is from God, Who invites us to enlarge the dimension of our horizon, in a work that aims at eternity.

It will not die
I have already said above that I have taken seriously the words of the man of God who appeared to me on the way. But, as the years go by, I realize he had not told me the whole truth. Certainly, he himself expected me to personally make this discovery. “Lord, I’m waiting here for nothing!” Waiting for nothing? My experience makes me feel the opposite: instead of waiting for nothing, I wait for everything.

Because God is faithful and does not betray those who trust in Him; when He saw fit, God himself sent His messenger who, that afternoon, met me there at the Nyala market. And from the mouth of someone who walked with a different step – the majnún (the insane) – words of gold came out: “I know who you are, you are not cáfir (unbeliever, unfaithful).” Here, in my view, is the beginning of every missionary message: I know who I am before the Creator Who waits for my response to the vocation to which He called me.

That encounter, in the middle of the street, was a moment of evangelization. Real, not virtual. But the messenger did not speak to me alone. His words, inspired by God and Lord of mission, are comprehensive and inclusive, beyond the confines of that particular market street. Although, at that moment, no one has probably captured their true and deep meaning, which does not surprise me. It would be too much for now. But we want to walk one step at a time. Time is of God. And eternity, too. The message is in the air. The seed was cast to the ground. It will not die. In chá Allah (God willing)!

It has been proven time and again how climate impacts women more disproportionately than men. They are more vulnerable. Whether it be lack of education, displacement, food insecurity, and lack of…