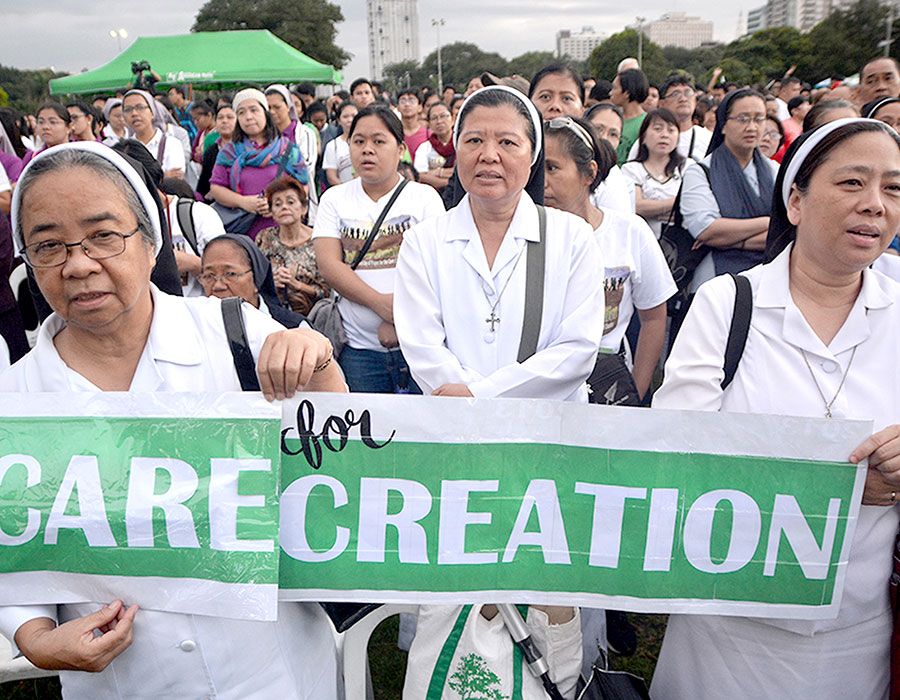 Economic, political, socio-cultural issues pose specific and urgent challenges to the Church and to us religious. The response of the religious must necessarily spring from the mystic-prophetic essence of consecrated life. It is imperative that the religious combine the two aspects.

All religious are called to be mystics. Ronda la Rue defines a mystic as “one who, above all else in life desires to know (not in the intellectual sense of knowing) the deepest truth of existence.” Some characteristics of the mystical experience are the following: a spiritual journey that leads to a new awakening; each one’s experience is unique; one goes through a desert experience (dark night of the soul) that results in a shift of consciousness and overturning of one’s old life patterns; one’s experience is beyond words; the mystic somehow inspires and transforms others by their lives.

The key elements that make up the atmosphere that enables the mystic to ponder things in his/her heart are: silence, solitude, asceticism

Silence
Not the negative silence of resentment, passive aggression or cowardice but the positive silence of mind, heart, emotions that prepares one’s heart to hear the voice of God. Perhaps our convents are oasis of silence but even in these places, even in the midst of physical silence, we can have raging storms in our thoughts and in our emotions. We can be replaying disturbing scenes where our ego was hurt; we can be preparing what we could have answered, what we would do to make revenge, etc. etc. So it must be a silence of one’s whole being.

Solitude
It is sometimes necessary to withdraw ourselves from human company to be attentive to what is going on in our own hearts. But we must make a difference between solitude and loneliness. Loneliness is a negative state, marked by a sense of isolation. Solitude is the state of being alone without being lonely. It is a positive and constructive state of engagement with oneself. It is the ideal state of hearing what God is telling us through nature, and through the anguished cry of God’s people.

Asceticism
The word “asceticism” comes from the Greek askesis which means practice – bodily exercise usually attributed to athletic training in the Olympic games. The early Christians adopted it to signify the practice of the spiritual exercises to strengthen one’s spiritual muscles or to acquire habits of virtue. Genuine mysticism is necessary for pondering things in one’s heart because the clamor of egoistic interests can easily drown the voice of God. It is, therefore, a form of mindfulness and focus.

Mysticism Leads To Prophecy
According to Fr. Lombardi a prophet “stands up, speaks out. Uses words if necessary. Lets Jesus use him/her to be His instrument to challenge dominant forces.” That’s what the prophets of the Bible did – they stood up, spoke out.

Much of the criticism of the prophets was levelled at the politically powerful, most often also the religious leaders, who used their power and influence for selfish or sinful purposes or for their failure to be true spiritual leaders.

The prophets were a balance to the unrestrained power of the absolute power of a despot. In confronting the powers, they spoke for the weak, the oppressed, the disenfranchised, those who had little voice in shaping their own lives or their own future.

Throughout Church history, whenever there was something wrong with the Church, a new religious group would rise up. An example is the foundation of our Benedictine order. The luxury and the degradation of life in the Roman church urged our founder, St. Benedict, to drop out from school and society and go to the hills of Subiaco where he founded the Benedictine order that would Christianize the whole of Europe.

But congregations of religious women are doubly prophetic because women religious live a life that is a deviation from the usual life of women who are socialized primarily to be wives and mothers. They thus gained the opportunity to be educated. It is no wonder that even in a patriarchal church, religious women like St. Teresa of Avila, St. Catherine of Siena, St. Hildegard of Bingen, Abbess Hilda of Whitby contributed not only to the Church but greatly influenced the society of their times.

A Prophetic Response
I will discuss here the different areas in today’s world that call for a prophetic response: economic injustice, ecological crisis, the woman question, and the quest for a just peace.

1. Economic injustice
Religious must be concerned about the corollary effects of economic injustice like the plight of migrant workers, refugees, homeless people , trafficked women and children, etc.

2. Ecological crisis
Do the religious seriously take the challenge of the ecological crisis? What do they do to conscienticize the students and the people they work with regarding these matters? How do they reconcile their vow of poverty with consumerist tendencies that have not spared convents? What concrete projects have they done to return to the earth what was taken from it? What kind of spirituality have they developed to re-establish the human being’s relationship with nature?

3. Women’s Issues
Although the equality of men and women before the law is provided in some constitutions, there is no country to my knowledge where there is actual equality of women and men in practice. Studies have shown that about 90 percent of violence against women and children happen in their homes. Incest, which has been a taboo topic for ages, is now coming out and it points to fathers, brothers, brothers-in-law, cousins, uncles, and even grandfathers as perpetrators. Marital rape was not recognized as such until recently when laws were promulgated penalizing it.

Many women are subjected to verbal, psychological and physical abuse by their husbands ranging from insulting words to actual assault and murder. The daily newspapers report cases of rape-murder, and many varied forms of violence against women and children.

In Third World countries, to escape the perennial economic crises, women and children are prostituted. There is no tourism program in Third World countries that does not include prostitution even if those countries consider prostitution illegal. Foreign military bases stationed in a country will occasion the development of prostitution cities around them. There is the phenomenon of so-called mail-order brides, surrogate mothers, victims of the human transplant business. The result is the spread of venereal diseases, AIDS, corruption of children, hole in the wall abortions causing death, unwed pregnancies, fatherless children, etc. etc. and the overall degradation of women.

Have the religious ever examined how they might have a role in the perpetuation of the woman question by our system of education, especially by religious education that can justify and perpetuate the discrimination and subordination of women and the entrenching of her stereotyped roles? How much of convent resources are used to conscienticize women about their situation and to give service to victims of violence?

4. Quest for a just peace
By peace, we don’t mean just an absence of war or conflict; we don’t mean an unprincipled peace or peace at all cost. It is the peace of Christ that the world cannot give and is based on truth, justice and interconnected well-being both on the personal and societal level.

On the personal level, this calls for a personal conversion, reconciliation with one’s fellow human beings, with the planet, and with God. It is an effort to be men and women of peace, to create an oasis of peace wherever one is and to contribute to the development of a culture of peace in the greater society. This latter includes working for equal economic opportunities, justice, empowerment of women, sustainable development, and preservation of the environment as well as political participation of peoples in governance, constructive conflict resolution, interfaith and intercultural dialogues.

Expectations
I would like to conclude by recalling Pope Francis “expectations” from the religious when he declared 2015 as the year of the consecrated life. His five expectations then were:

1. Religious should be people of joy

2. Religious should be prophets

3. Religious should be “experts in communion”

4. Religious should be outward looking and not focused on themselves

5. Religious must act according to the needs of the times

With the inspiring example of Pope Francis and his challenge to religious to live a “fruitful celibacy,” there is an urgent call to the religious to regain their first fervor and joyfully embark in spreading a Gospel of Joy and to “heal wounds and warm the hearts of people.”

They need to truly live their vow of poverty and share their resources with the poorest of the poor. They do all these by being prophets in contemplation and mystics in action. And amid discouragement and disappointments in their apostolates they are buoyed up by hope that springs from God’s unfailing fidelity.

Faith’s healing and gift to us offers us belonging—belonging to God and to a community. Through belonging, we experience meaning and peace. Faith is the experience of being loved by a loving Creator…